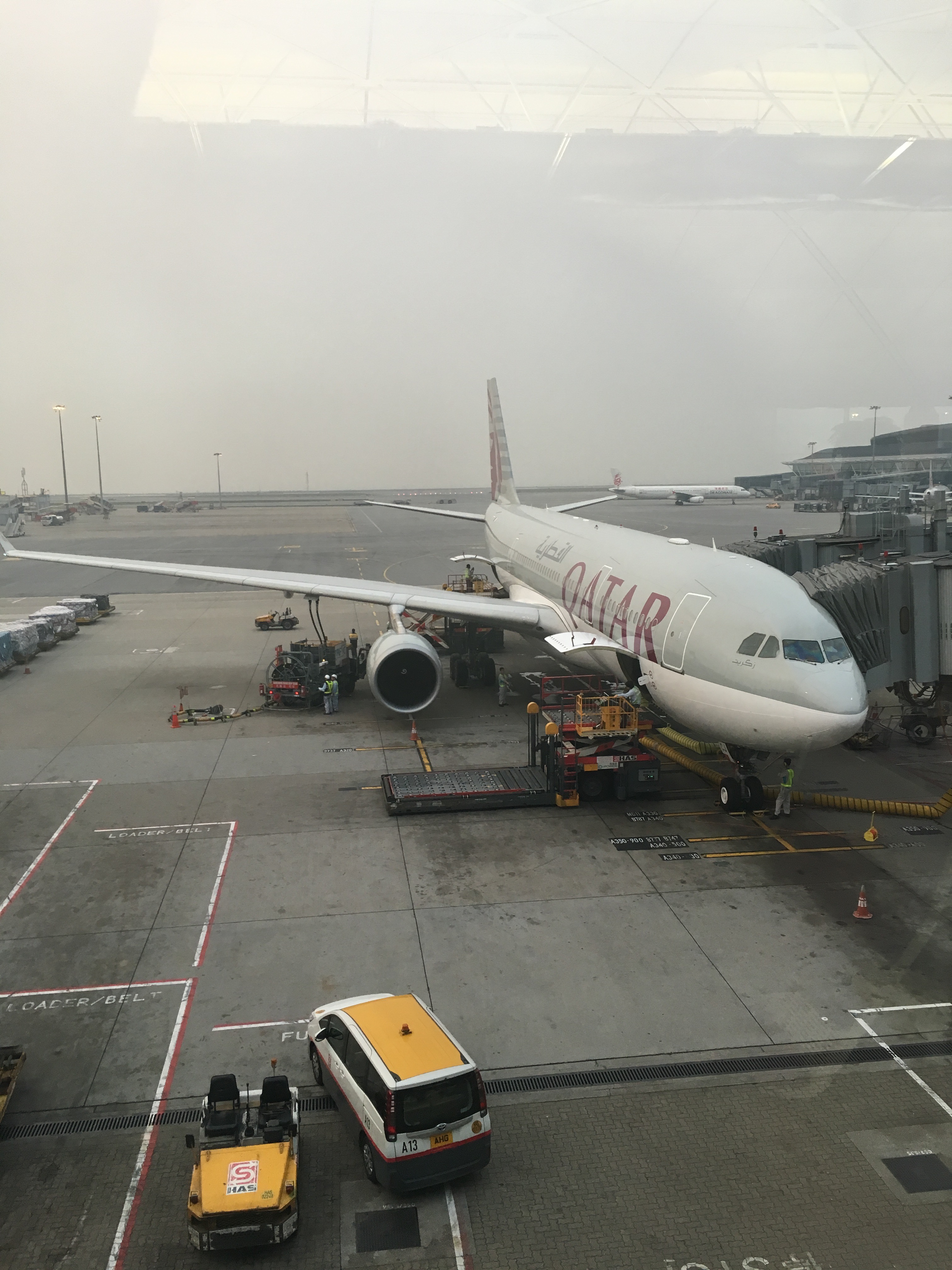 So, as is clear, I tend to fly with Singapore Airlines and Star Alliance carriers whenever possible. In some instances though, it simply isn’t possible, much to my dismay. It does, however, give me a chance to experience new carriers, and see what the competition is like. I may have a little bias towards SQ, but after experiencing Qatar Airways, I can safely confirm that that bias is true and necessary.

Boarding commenced on time and was relatively speedy. I’ll note that there were no magazines or newspapers offered at the door before boarding, unlike SQ.

I’ll also point out something very strange that I noticed here. Qatar Airways boards Economy Class before Business Class for flights leaving Doha. They kept saying “We now invite Economy class rows 30 onwards… Business Class please remain seated.” I asked the steward about this later, and he said that was simply the protocol. They always will board Economy before Business so that the Business passengers “can enjoy the lounge”. They physically did not let Business Class onboard until Economy boarded, even though there were 2 airbridges and a 2-class aircraft. I mean sure, they can go ahead and use the lounge, but if they want to board they should definitely be allowed to. Really strange.

The lighting in the cabin was rather dim and drab, creating an unwelcoming environment, though this was due to the age of the aircraft. This was also evident through the age-old entertainment systems, that were highly unreliable and barely seen on most modern aircraft. Many airlines offer a coat-check service, even in Economy, however, such a service is not properly offered with QR. The stewardess was happy to hang it in the Business Class cloakroom, yet asked me to get it off the crew at the end of the flight. I do commend them for their efforts on that part. 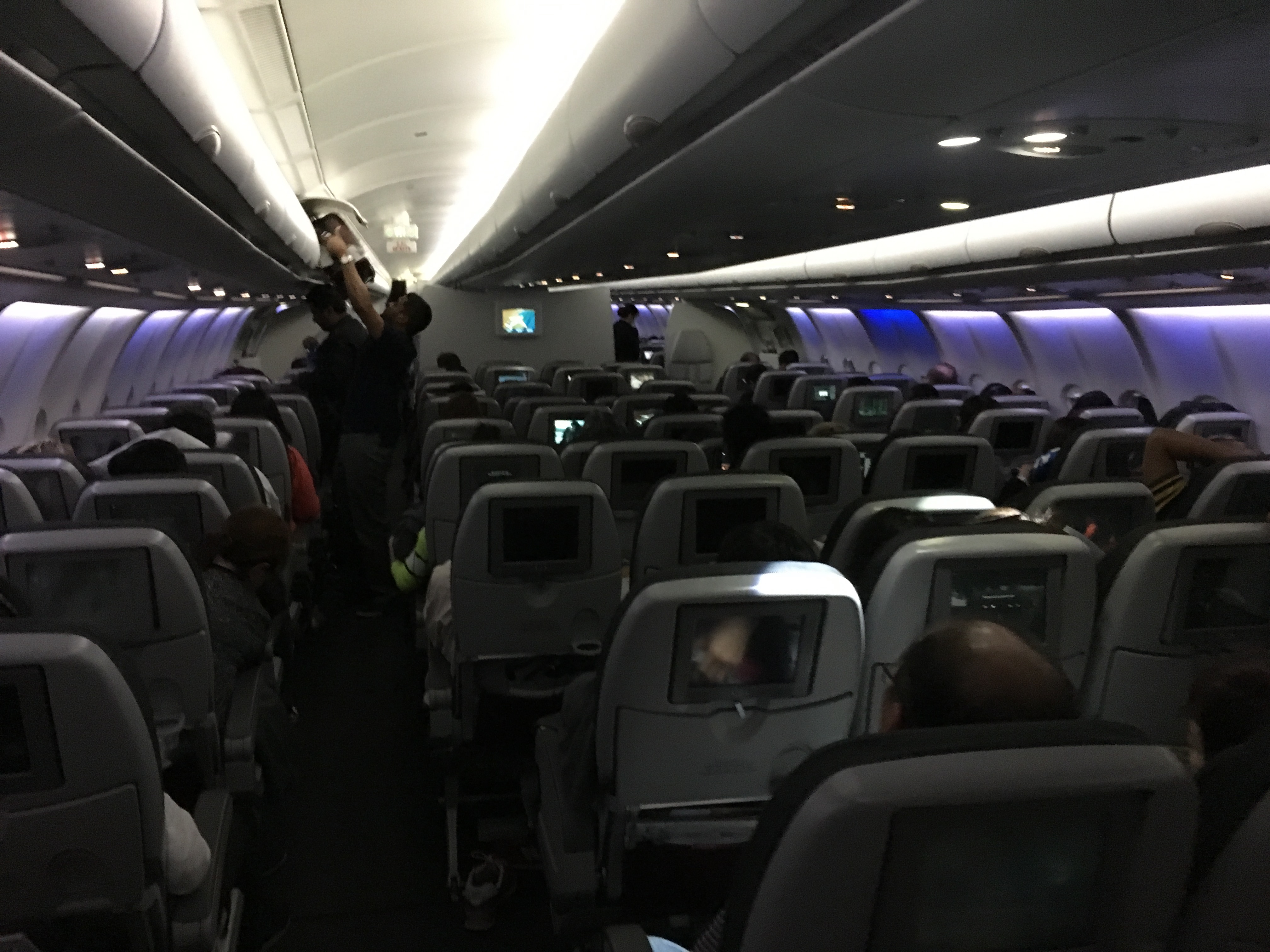 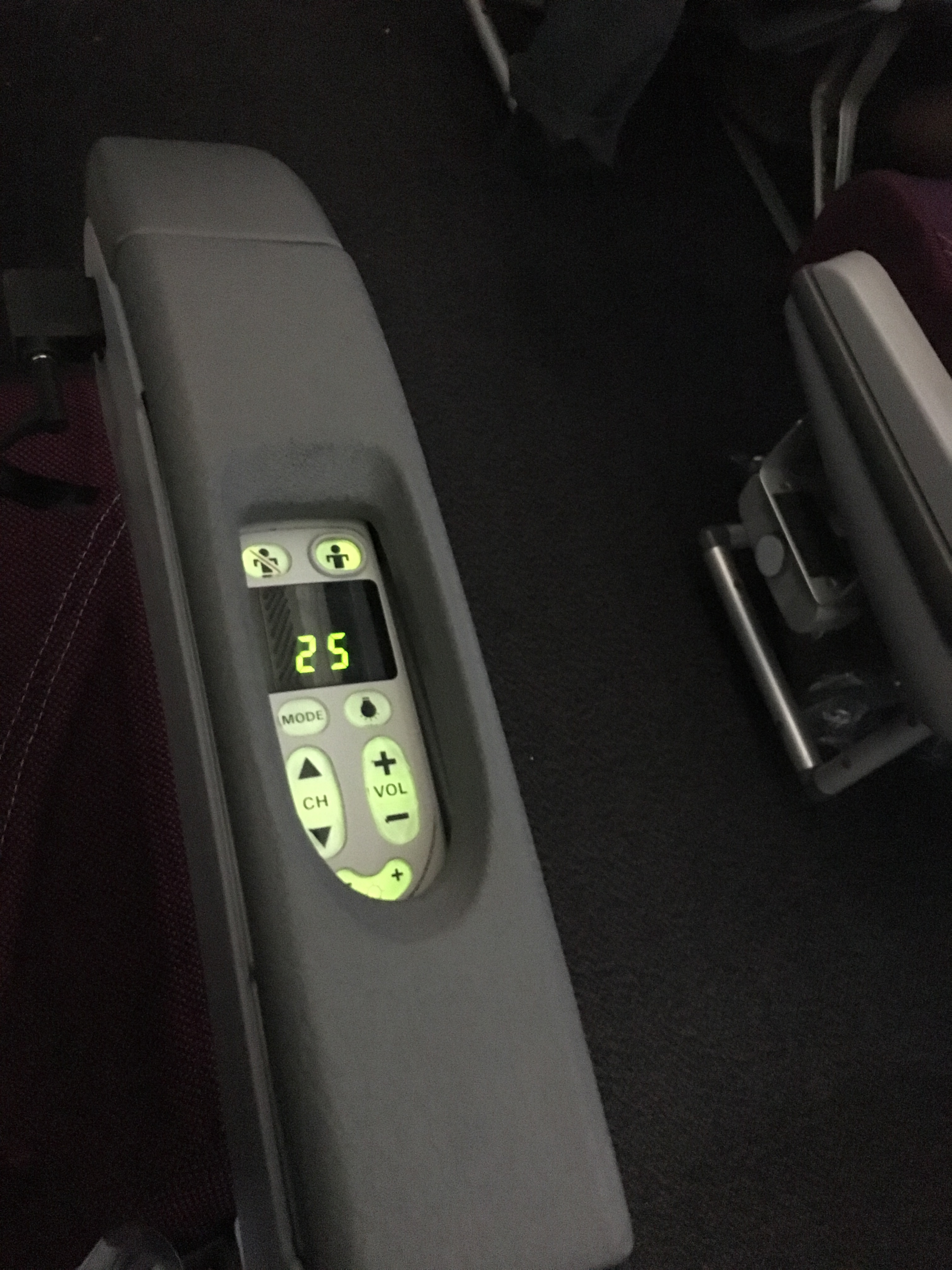 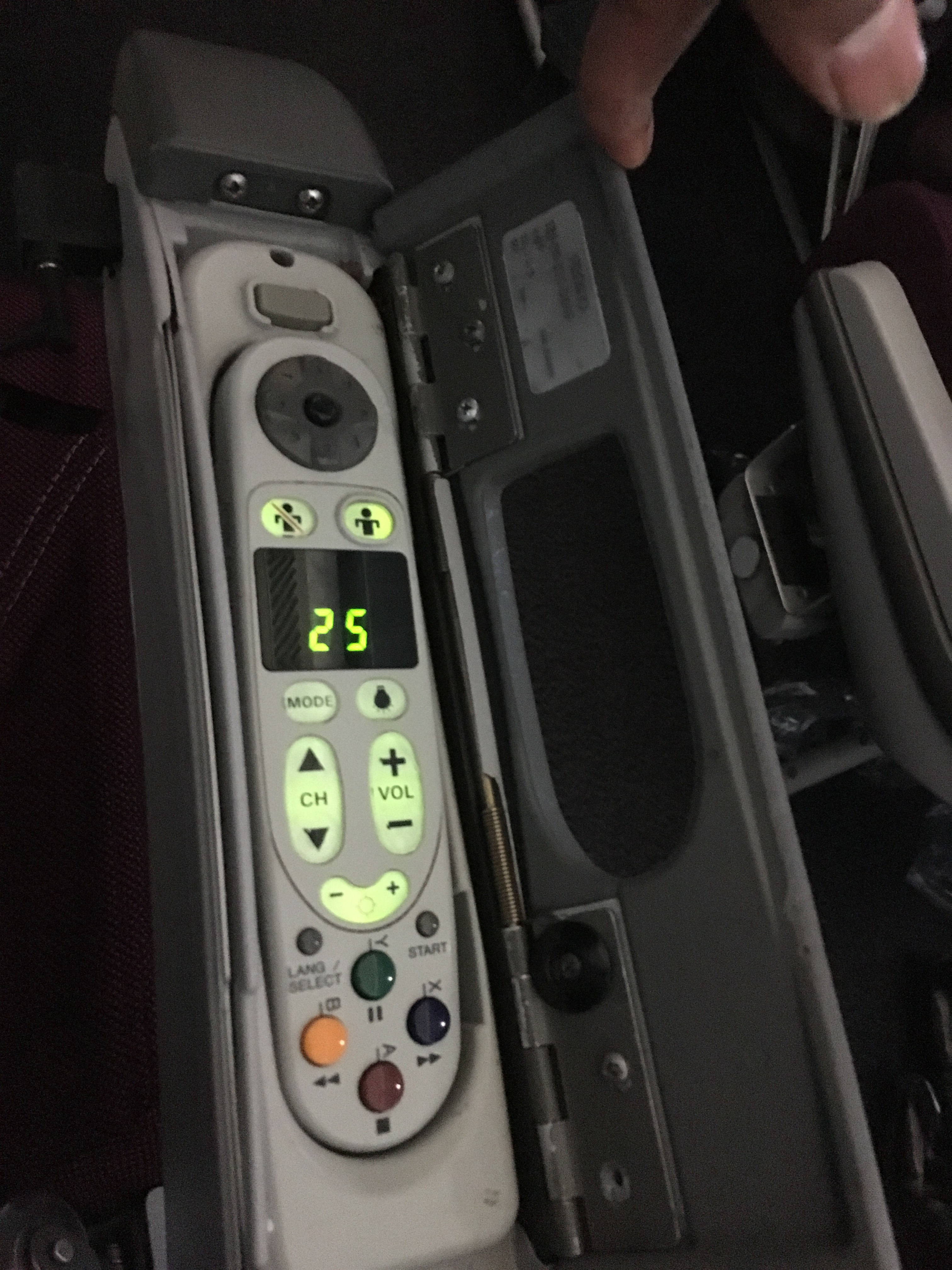 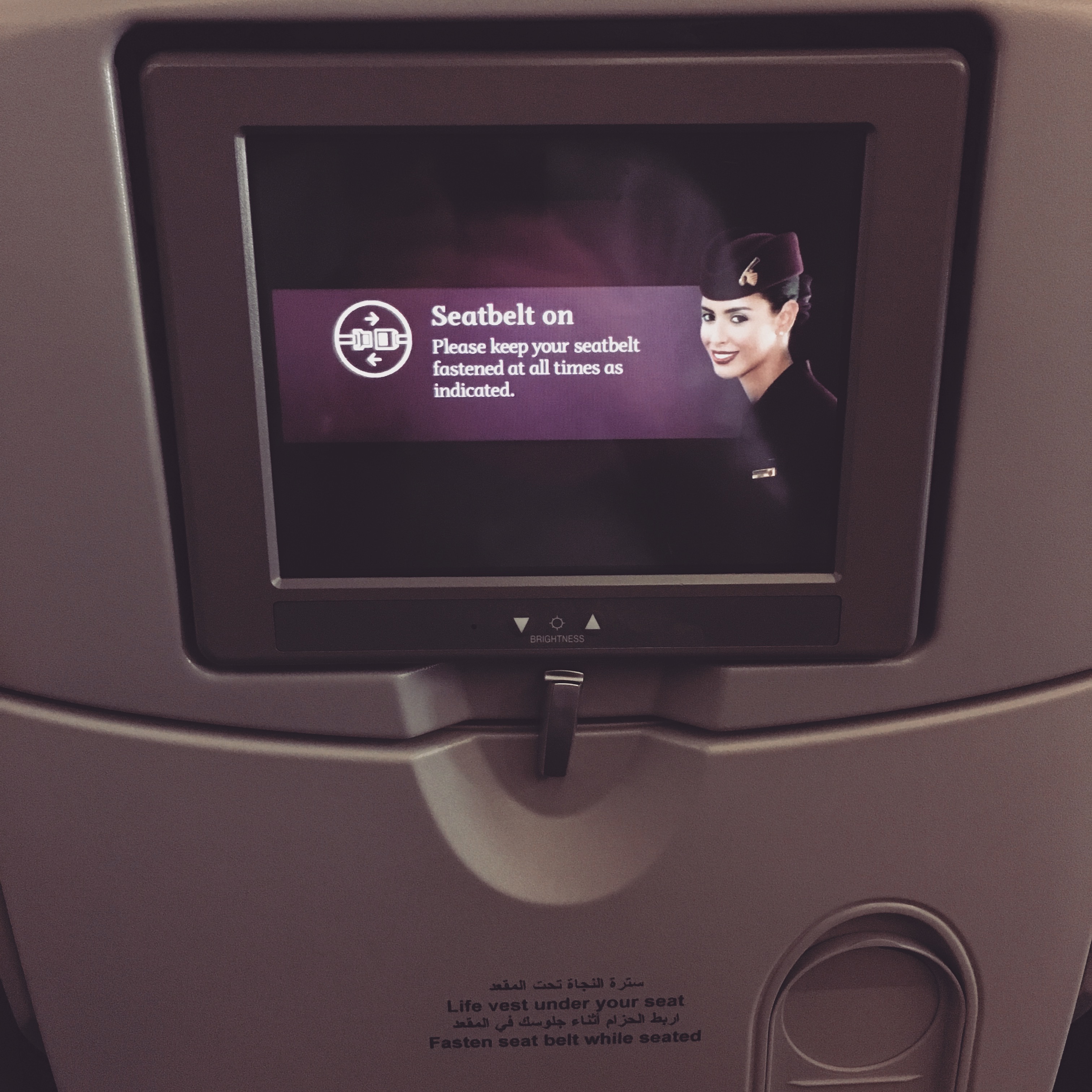 The seat itself was fairly comfortable, with very generous legroom and average recline. Qatar has a very sophisticated and classy colour scheme, with deep red and grey fabric seats. A small pillow, a sealed blanket and an amenity kit (containing socks, eyeshades, earplugs and a toothbrush) was placed on each seat at boarding. Their overall branding and cabin atmosphere is admittedly at a very high standard. 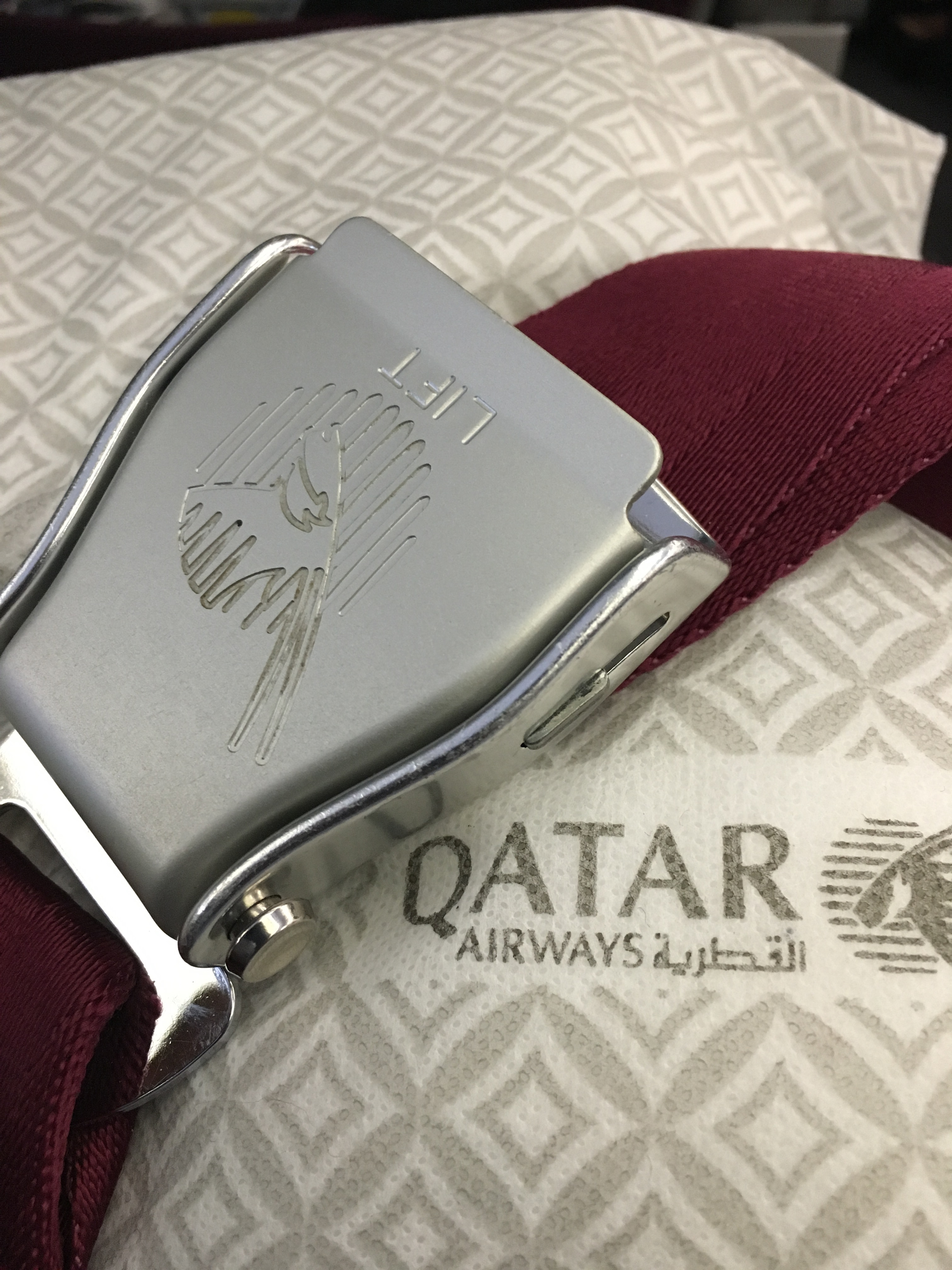 Refreshing towelettes (pre-packaged, disposable, cold, moist towelettes) were distributed from a basket. This is common for most carriers, and is far from the hot linen towels offered by a few premium airlines (i.e. Singapore Airlines).

Meals were served after takeoff, and were pretty basic. The serving size was relatively small, but was flavoursome and presented beautifully in slick black containers. Interesting to note that Economy Class passengers are given plastic cutlery on the Hong Kong flights, as there was a history of passengers stealing the metal cutlery. A tea and coffee service was supposed to follow the meal service, but this was unfortunately interrupted by turbulence. 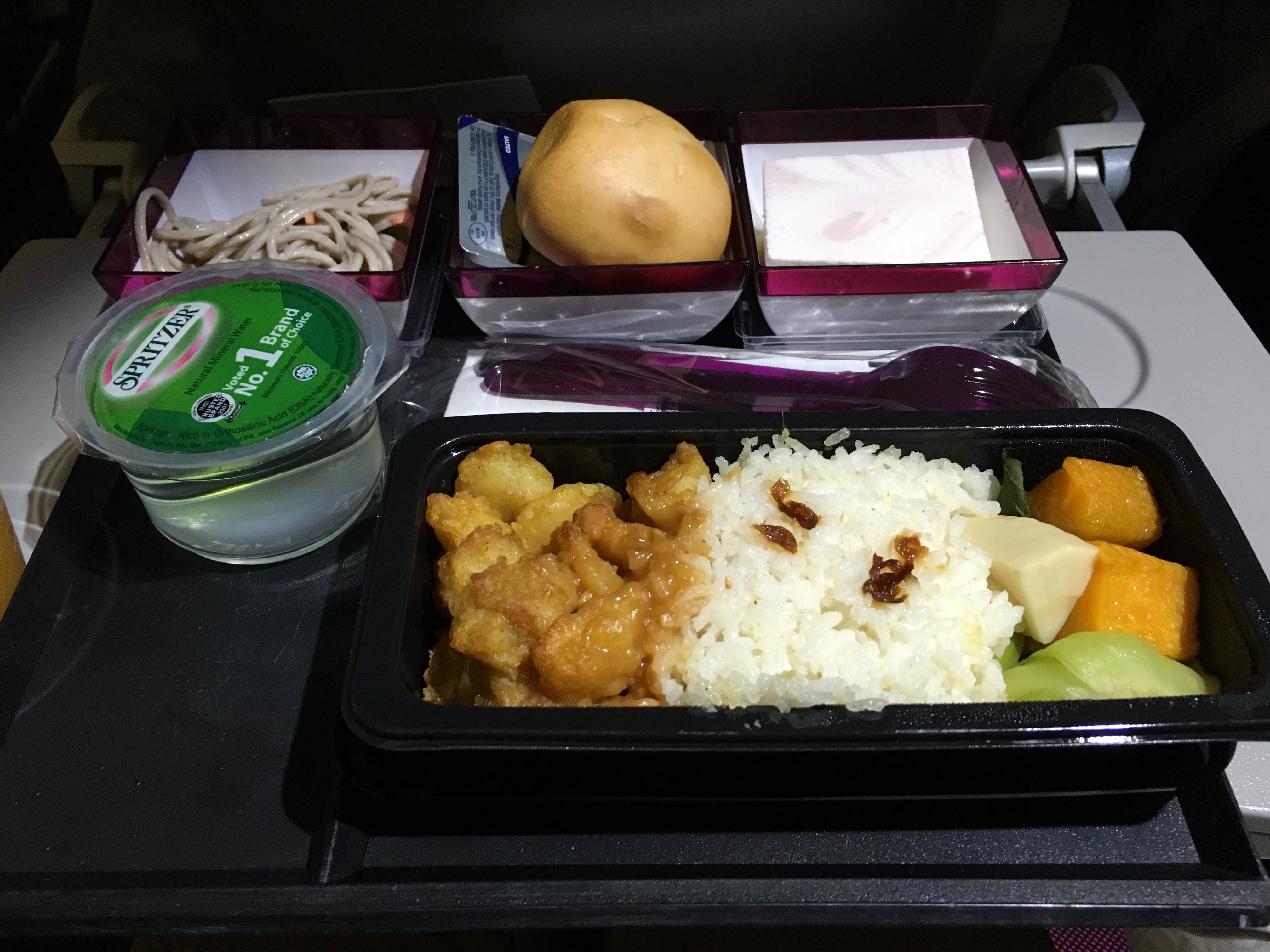 Later on through the flight, I went and spoke to the crew in the rear galley. One of the stewardesses said she was formerly from Tiger Airways and did safety training at the Singapore Airlines Training Centre. She said straight up “Singapore Airlines is much better than Qatar, isn’t it?” POINT PROVEN!

After the lights were switched off, and the cabin was asleep there were several patches of rough turbulence, with massive thunderstorms outside making for a phenomenal sight. As such, the flight routed around the stormy weather, resulting in a slightly delayed arrival. 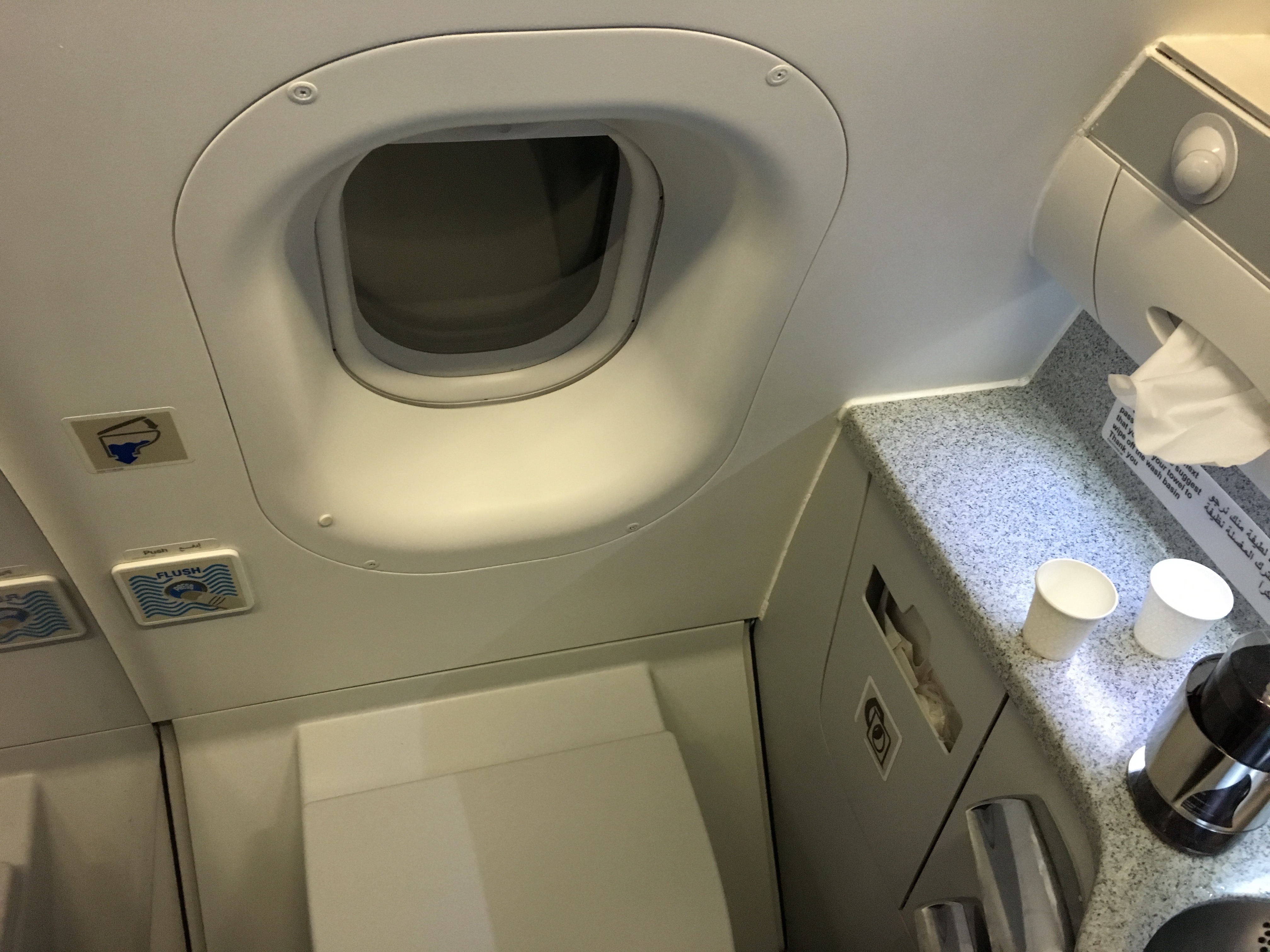 Probably the best part of the aircraft is the window in the lavatory! 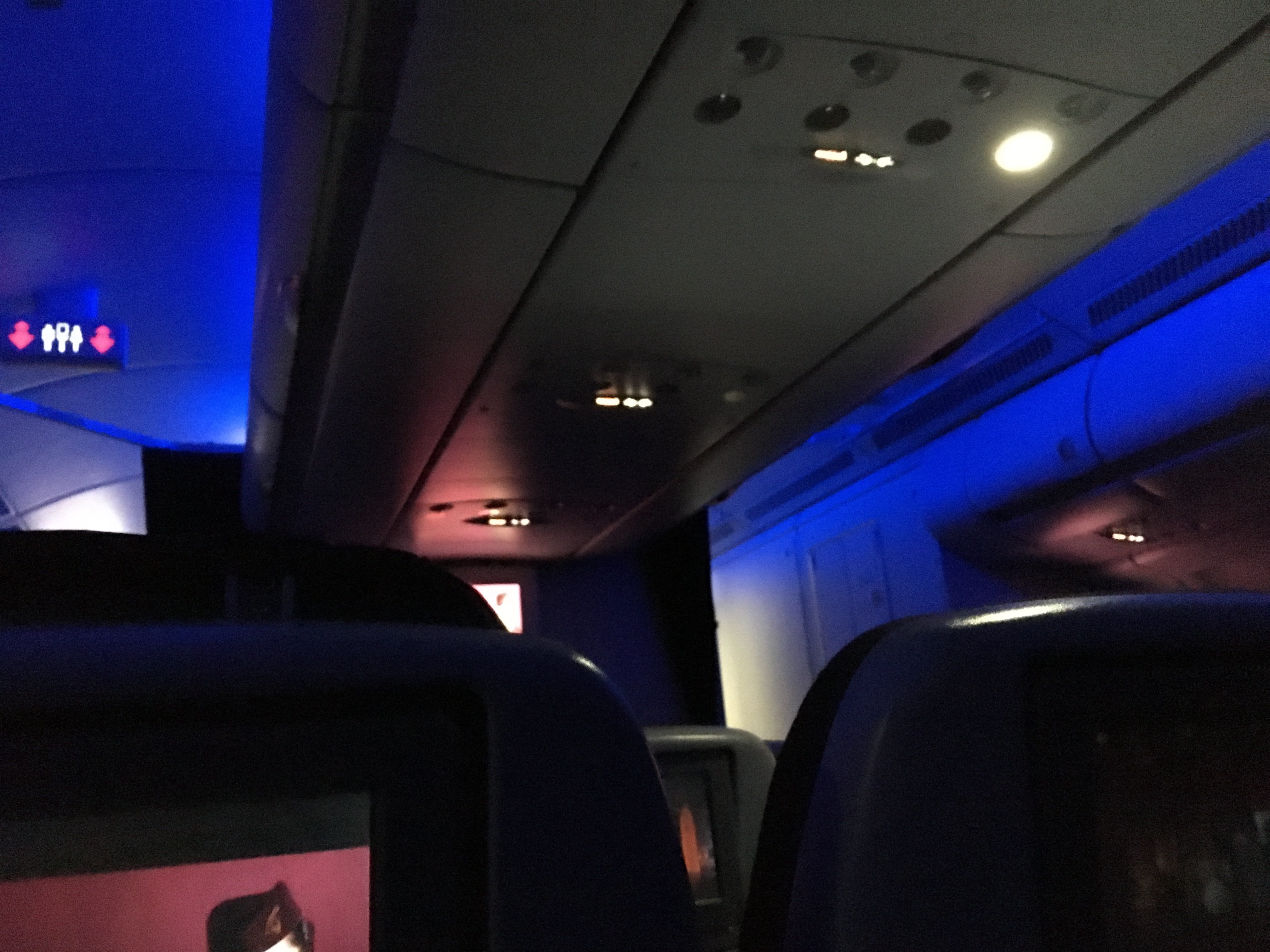 The classy blue mood-lighting was used during takeoff and landing.

3 hours before landing, the lights came on again, and brunch was served 30 minutes later. Following this, the lights were dimmed for another 1.5 hours, until the captain made a very brief announcement to conclude the flight. The seat belt signs were then switched on very early, and we made our approach to Hamad International.

So far, Qatar has not lived up to the “World’s Best Airline” rating. The hard product on the older aircraft is in desperate need of an update, yet this is progressively happening across the newer fleet. I was neither impressed nor unimpressed by the cabin crew. Many said that their service standards were inconsistent because of the incredible multi-national nature, which is a very valid point. Whilst on SQ I’m often blown away, no such situations arose here with QR. The crew did their job, but many did it without a smile, and without the courtesy and friendliness that I’ve come to expect. Meals were poor and simple, and on slightly shorter flights (say Doha – Milan) paper menus are not even distributed. Maybe it is my bias, maybe it’s just the older aircraft (stay tuned for a report on Qatar’s 787), but in all honesty, Qatar is not all it is cracked up to be. It is a basic airline that is well marketed, just like Emirates and perhaps Etihad, and certainly doesn’t deserve the top spot. It may be true that their premium cabin services are at the same level or perhaps higher than SQ, but an airline that doesn’t offer a superior Economy service should not be ranked highly. Experiencing this and other carriers has made me less concerned about the cost-cutting happening over at Singapore Airlines, as they still delivers a phenomenal and superior product compared to the rest of the industry. I am still waiting to be properly impressed by a carrier other than Singapore Airlines.

Qatar, you can do better.