The Airbus A350 is the newest major airliner in the market, and promises greater fuel efficiency and enhanced passenger comfort. Singapore Airlines took delivery of their first of 67 aircraft at the beginning of March, and placed the aircraft on operational service shuttling between Singapore and Kuala Lumpur throughout the month so as to train tech and cabin crew before the proper inaugural flight to Amsterdam in April. As I was to travel through Singapore at this time, I decided to change schedules and do a turnaround flight to KL onboard the slick new aircraft.

You can also view the previous report in this trip:

After explaining the situation over and over to several confused check-in agents in Sydney and Singapore, we finally had all boarding cards for the outbound and return flight. Once in the gate area in Singapore, the aircraft stood there in all its glory, with most passengers not even aware of how special it was.

Prior to boarding, the Inflight Auditor met us in the gate area and introduced himself before escorting us to the aircraft. We had the chance to tour the cabin and meet all the cabin crew (who were actually doing their first A350 flight as well) before anyone else boarded, and what an experience!

The cabin is unbelievably spacious, with high ceilings, improved storage bins and an all-round ‘spaceship’ feel. The rear galley was like something out of the future, and was enormous! For security reasons, though, I’m unable to post pictures of it.

All A350s feature an LCD display for seat belts/ no smoking/ no phones signs. They can display animations and scrolling messages, whatever is desired by the airline

During this period, the crew were very intrigued and welcoming, offering us drinks before departure and explaining the aircraft. In fact that flight was the first for almost all the crew.

We also met the tech crew in the cockpit. There were 4 onboard the flight, with 2 check-captains, 1 trainee being checked and 1 captain observing the flight.

Once boarding commenced, the normal welcome service commenced with water and juices served along with hot towels. It was incredible to see so many passengers board with awe as they saw the new aircraft.

After what seemed like ages, we pushed back and started engines. This whole process was incredibly silent, especially as the power switched from APU to engines. One thing I will note is that a light smell of jet fuel flowed through the cabin as the engines were started up.

Takeoff was relatively quiet (although nothing like the A380), yet featured very rapid acceleration.

The Business Class seat is almost identical to the phenomenal product currently installed on the new and refitted 777-300ERs, and rivals other airlines’ First Class cabins. It is laid out in a First-Class-like 1-2-1 configuration across a forward and rear cabin, with 6 and 4 rows respectively.

The floor features glowing strips as escape lighting. This is absent on most other aircraft. The carpet also features a houndstooth design that matches the headboard, pillows, linen, wall designs and even the galley and bathroom floors.

An improved curtain rail makes for a greater divide between cabins, ensuring privacy, and silence.

As is the case on the Singapore Airlines A380 and 777 aircraft, the centre overhead bins are absent in Business Class to create even more openness. The ample storage and few seats means these bins are not needed.

I reviewed the new seat on an earlier flight from Singapore to Sydney, but below are some more pictures.

Just like in the 777 aircraft, rows 11 and 19 are bulkhead seats with a lot of extra room to move.When choosing between the two, I’d recommend row 19, as row 11 is offset and slightly narrower due to the fuselage curvature.

The seats feature excellent storage space all over.

There are extensive seat and lighting controls, as well as a beautiful new in-flight entertainment system.

Well thought out headboard lighting. There are three different angles, with each light having the ability to be adjusted for brightness. The seat also features controllable ambient lighting, a reading light on the opposite side of the headboard and another reading light in the overhead panel.

Singapore Airlines A350 Business Class Seat Numbering. A “Do Not Disturb” light can also be switched on

The lavatory is nothing too different, but does feel slicker and more stylish.

I took the little time we had to try out the new KrisWorld Companion App. After connecting an iPad to the onboard wi-fi, it’s a quick process to pair it to your individual seat. You’re then able to control the entertainment system, view your favourites and even see flight information on the tablet whilst watching entertainment on the main screen. 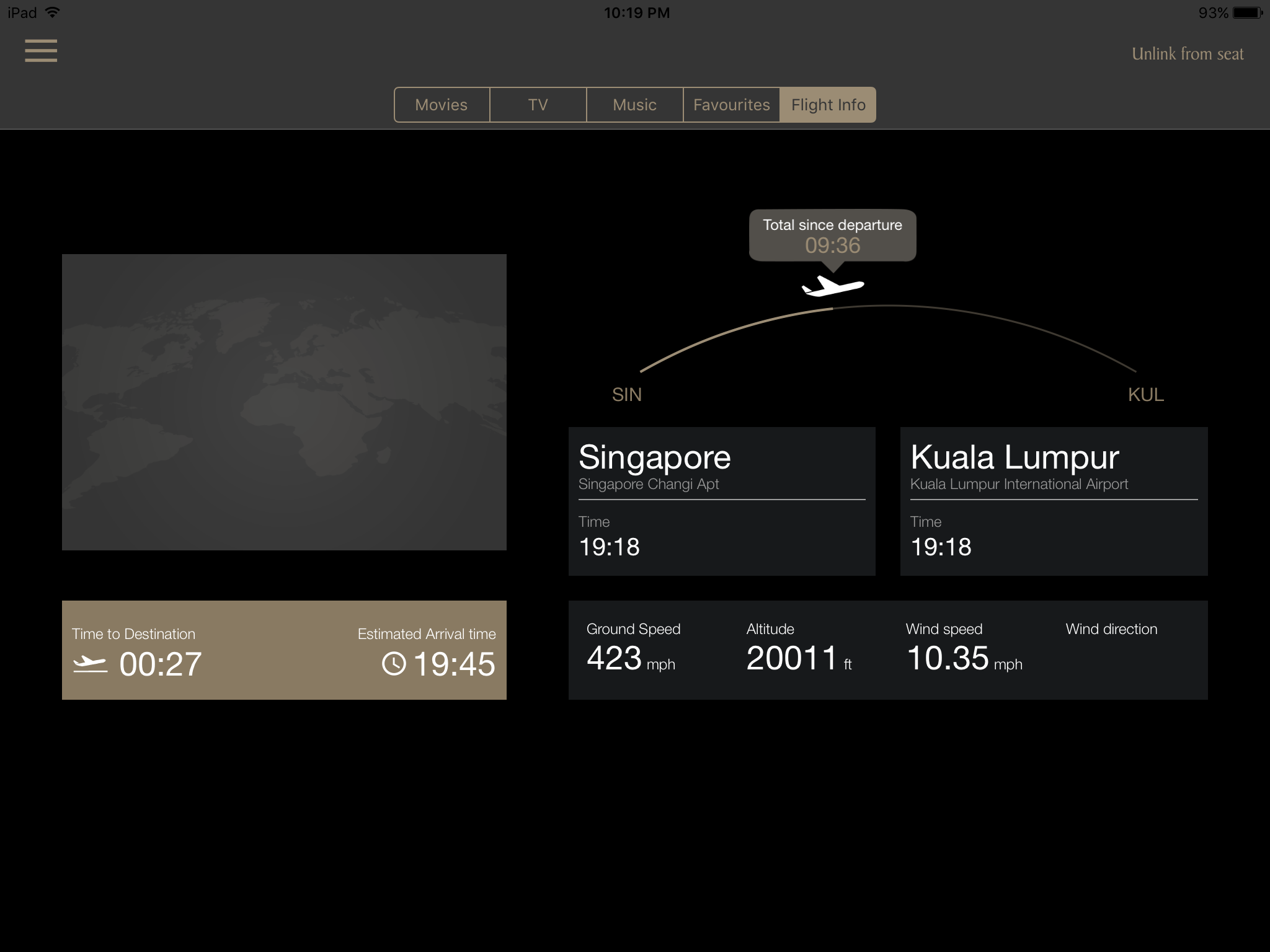 Once the seatbelt signs were switched off, the crew commenced the service. In Business class, this consists of a tray, laid with a tablecloth, and a refreshment served on a proper ceramic plate with real cutlery and glassware. This is all for a 40 minute flight! Before I could finish the meal, the Captain came over the PA announcing descent was to commence. It was all over too quickly!

The A350’s landing procedure is really strange. As soon as the nose gear touch the ground, almost maximum brake force and reverse thrust is applied, and a screeching sound can be heard. It also feels like a very strong stopping force, much more so than would be usual. Anyway, after landing and reaching the gate, we left the aircraft and said “see you soon” to the crew. We simply walked out of the aircraft, turned right around, cleared security and were back in the gate area ready to board again!

Stay tuned for the return trip in Premium Economy.