When Singapore Airlines announced they were taking delivery of the snazzy new A350 aircraft, they also touted that they’d be using the aircraft to restart the uber-long Singapore to New York flight, which clocked in at over 18 hours each way… Non stop.

This, as well as the Singapore to Los Angeles non-stop services, were to resume in 2018 with a new A350-900ULR, fitted with next-generation cabins.

Today (14/06/2016), however, Singapore Airlines posted something puzzling on their Facebook page… 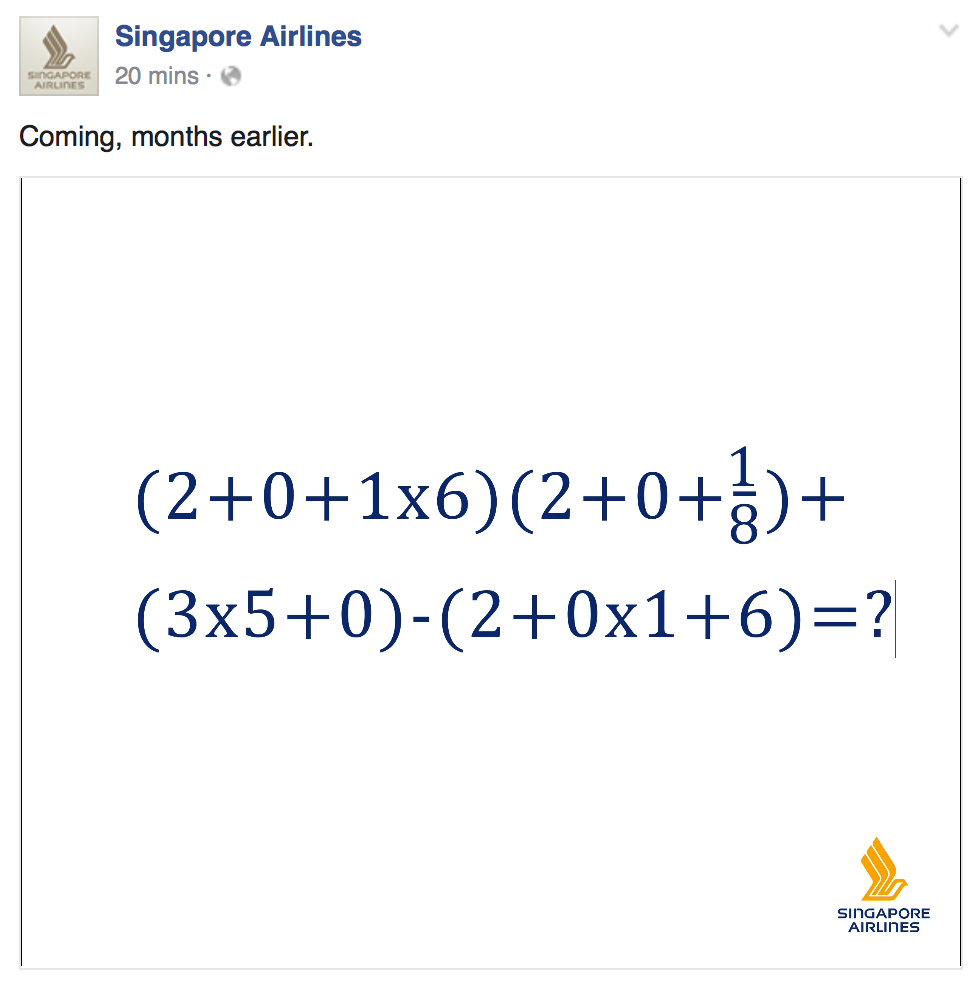 The result is 24, and if you take that in the context of their post… “Coming 24 months earlier”. Could this be what they’re getting at? That’s what the consensus of the comments on that post say. However, there could be more to this.

Firstly, the actual aircraft tasked with operating that route, the upgraded A350-900ULR, has not been released yet, and in fact is barely in the early development stages. How could it be possible that the aircraft were to miraculously be ready some time this year?! Having said that, the event could simply be resuming “Non-Stop flights to the USA”. United just commenced non-stop flights from San Francisco to Singapore, operated by a 787-9, with a range of 8,786 mi. In fact, the current A350-900 aircraft that SIA own are capable of flying to SFO non-stop, and possibly even to LAX. The distance to SFO and LAX is 8,446 mi and 8,770 respectively. The A350-900’s range is 9,320 mi, meaning it can easily cover these routes! When you look at the puzzle more, it also displays the numbers: 2016, 2018, 350 and 2016, all of which are of significance to this idea.

Another possibility could be SQ24. This flight operated SIN-AMS-EWR in the past, but ceased operations many years ago. It is indeed possible that SQ may be reviving this route with the A350.

But there’s something else that was key to that 2018 date… New cabins. SIA have planned brand new Economy, Premium, Business, First and Suites products to debut on upcoming A380’s that are being delivered next year, and in 2018. There’s also a chance that these products will be revealed to the world well ahead of their scheduled release, however, this is unlikely given the time and effort SIA would spend developing cabins. Some even noted that the 24 could reference the square-footage of the new Suites.

What else could 24 mean?? SIA has 19 A380’s at the moment, with another 5 on order, bringing the total to 24. Could this signify early delivery? It’s unlikely, though, given that those next 5 air-frames do not appear to be in construction yet.

The non-stop US flights (SFO or LAX) with the A350 seem to be most likely. United just commenced such a non-stop service, undercutting SIA’s solid position on the SIN-HKG-SFO route. This could very well be a big bite back at United who seem to be nabbing passengers from SIA.
UPDATED

Australian Business Traveller just posted that Singapore Airlines would this week announce non-stop flights to San Francisco with the A350… So there we have it! SQ is certainly fighting back against United… They weren’t going to have any of that from UA!