Well, we had an incredible outbound flight from Singapore to Kuala Lumpur, in the A350’s new Business Class cabin, and had just left the aircraft in Kuala Lumpur. After walking into the terminal, we turned straight back, cleared security and entered the gate area to fly right back to Singapore, aboard the same aircraft, with the same crew.

We were to originally fly Economy Class on this return leg, but as the boarding cards were scanned, the magical “seat error” was shown, accompanied by an error tone. The agent then reprinted the boarding cards in row 32, which was actually the Premium Economy cabin. Premium Economy is not sold on Kuala Lumpur flights, and so KrisFlyer Gold/ PPS Club members are often upgraded to the Premium seats (although service is exactly the same). Was a very pleasant surprise to finally receive a semi-upgrade by SQ! 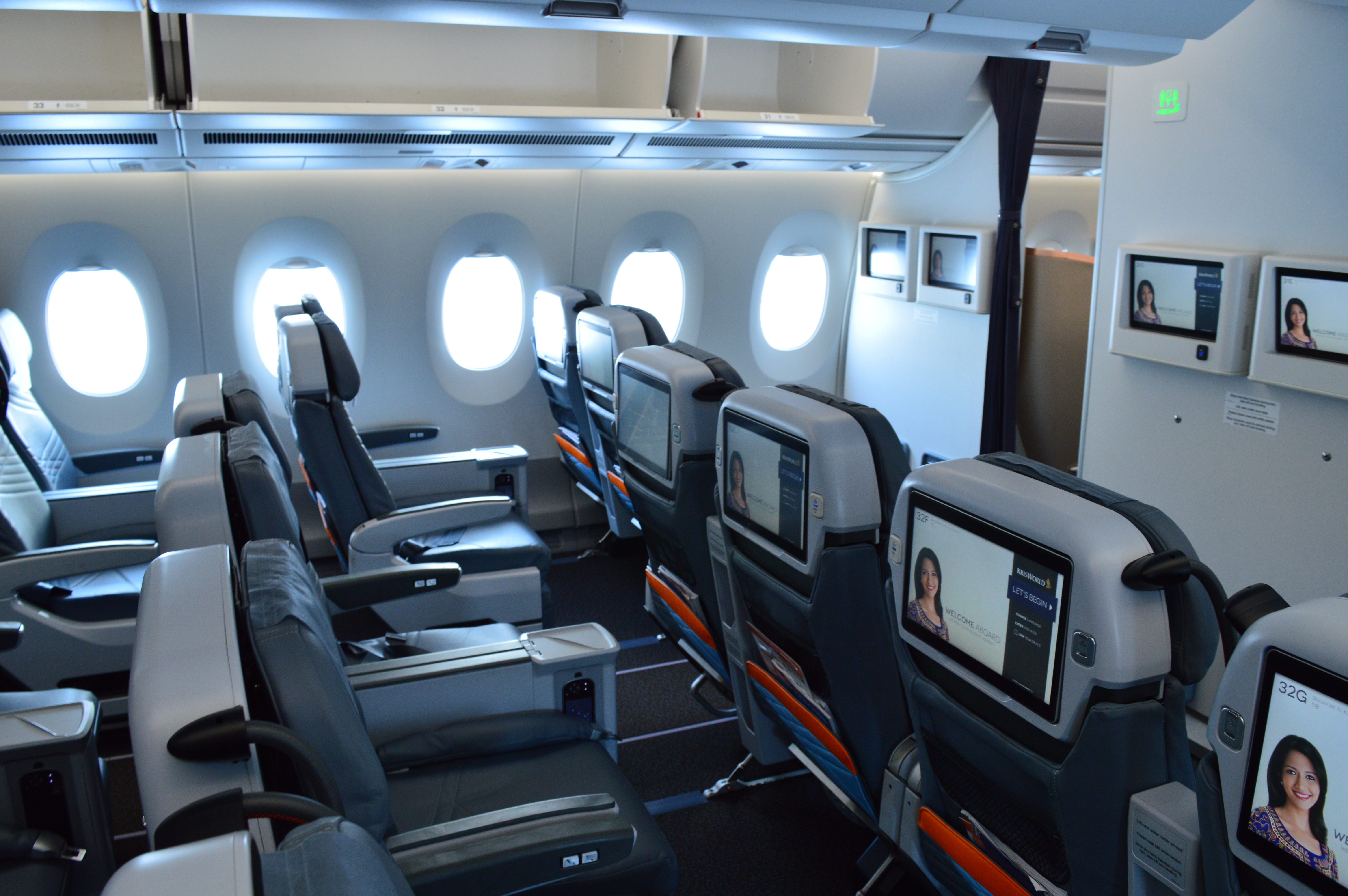 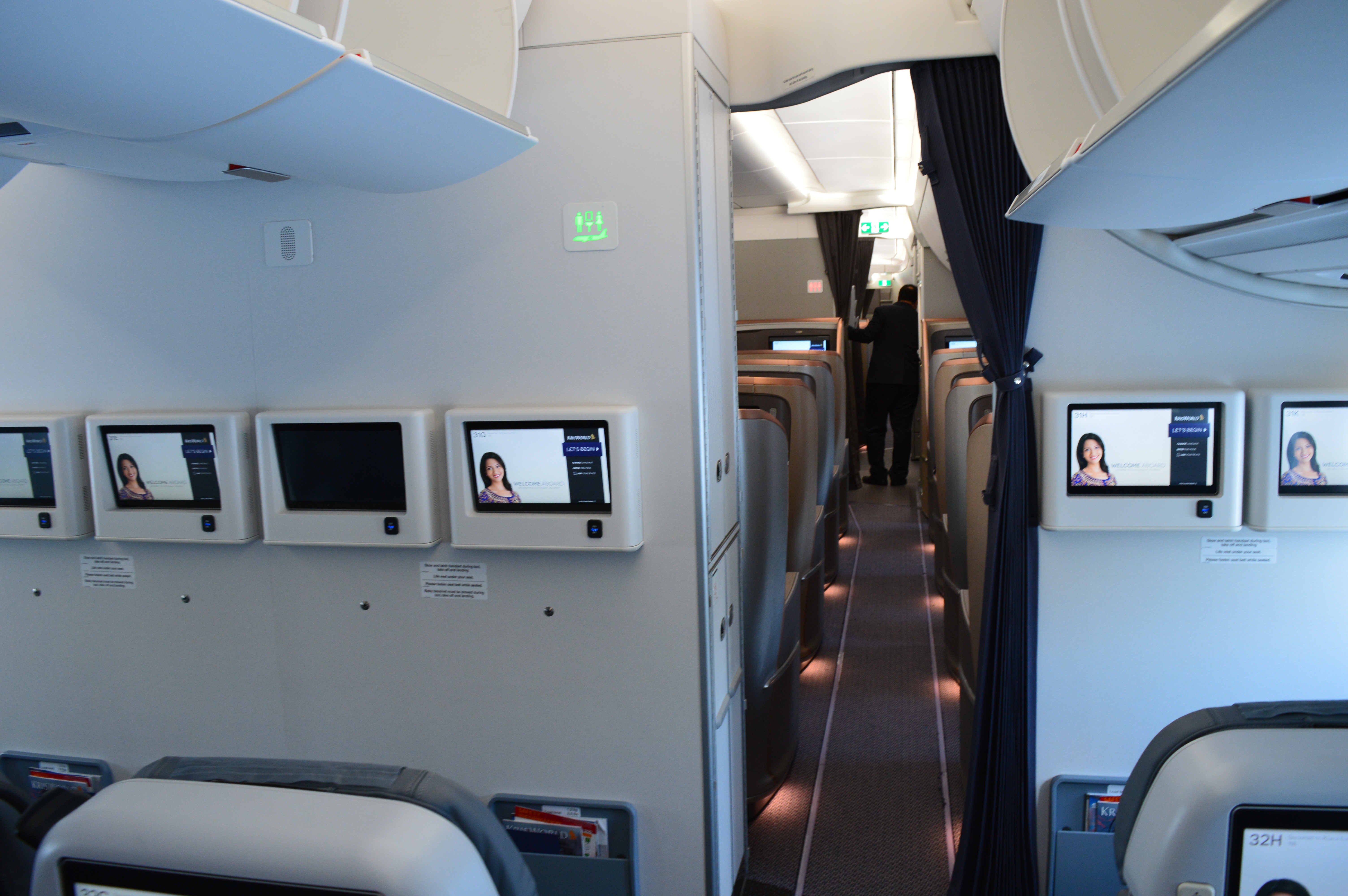 Similar to the A380, bulkhead rows have IFE screens mounted a little too high on the wall. The 777 EMEX seats have convenient screens located in the armrest.

Once onboard, we said hello to the same crew once again. The inflight auditor then showed us to the crew rest area at the rear of the aircraft as boarding continued. It was a super spacious area with 8 flat beds and an area to stand up in front of a mirror to tidy up before going back out the cabin. It was very well air conditioned, and featured curtains dividing each bed, as well as individual entertainment systems.

By now, it was dark outside, and the true beauty of the A350’s lighting systems were visible. The cabin was a soft purple for the majority of the flight, creating a really soothing environment. 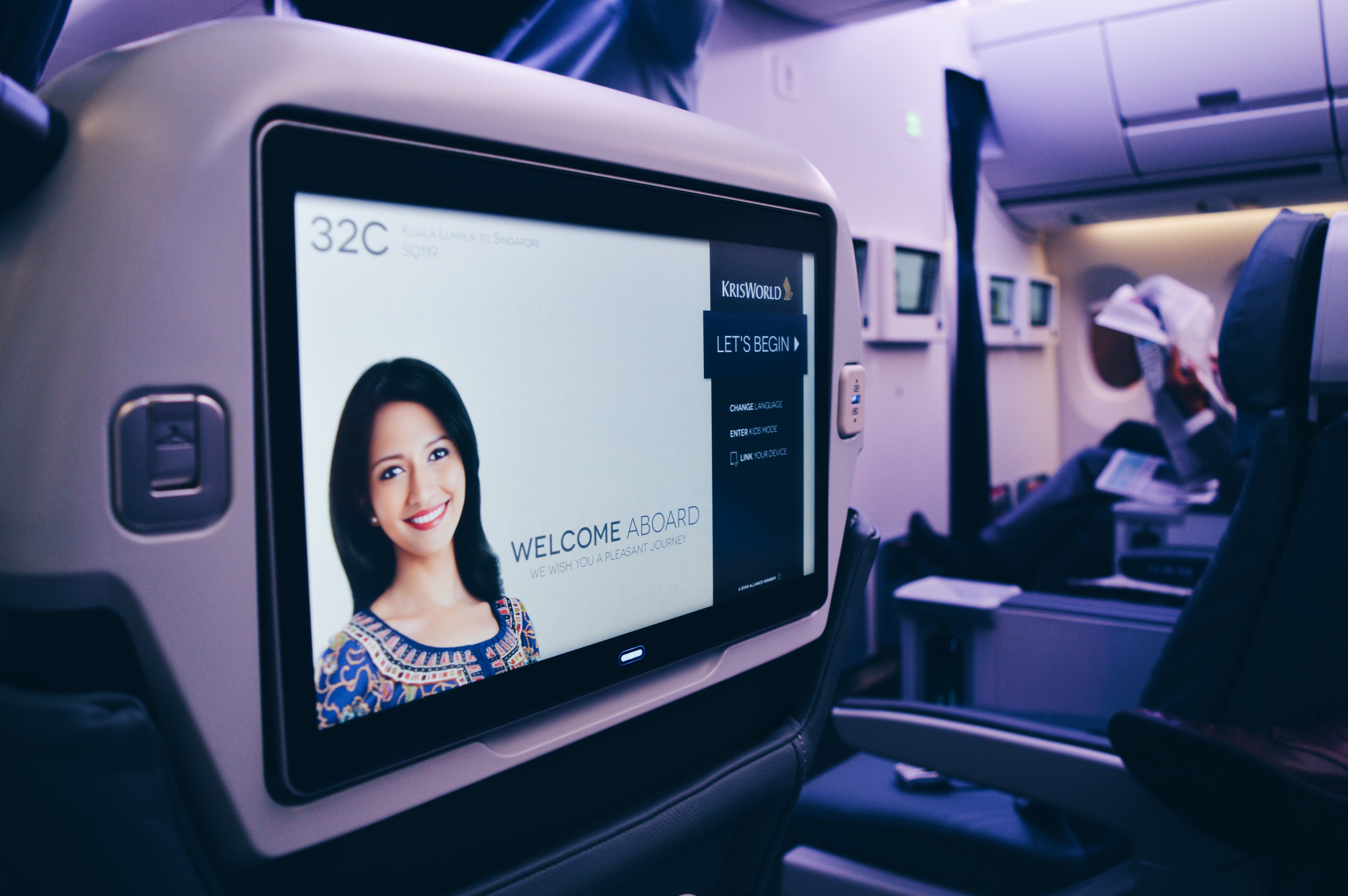 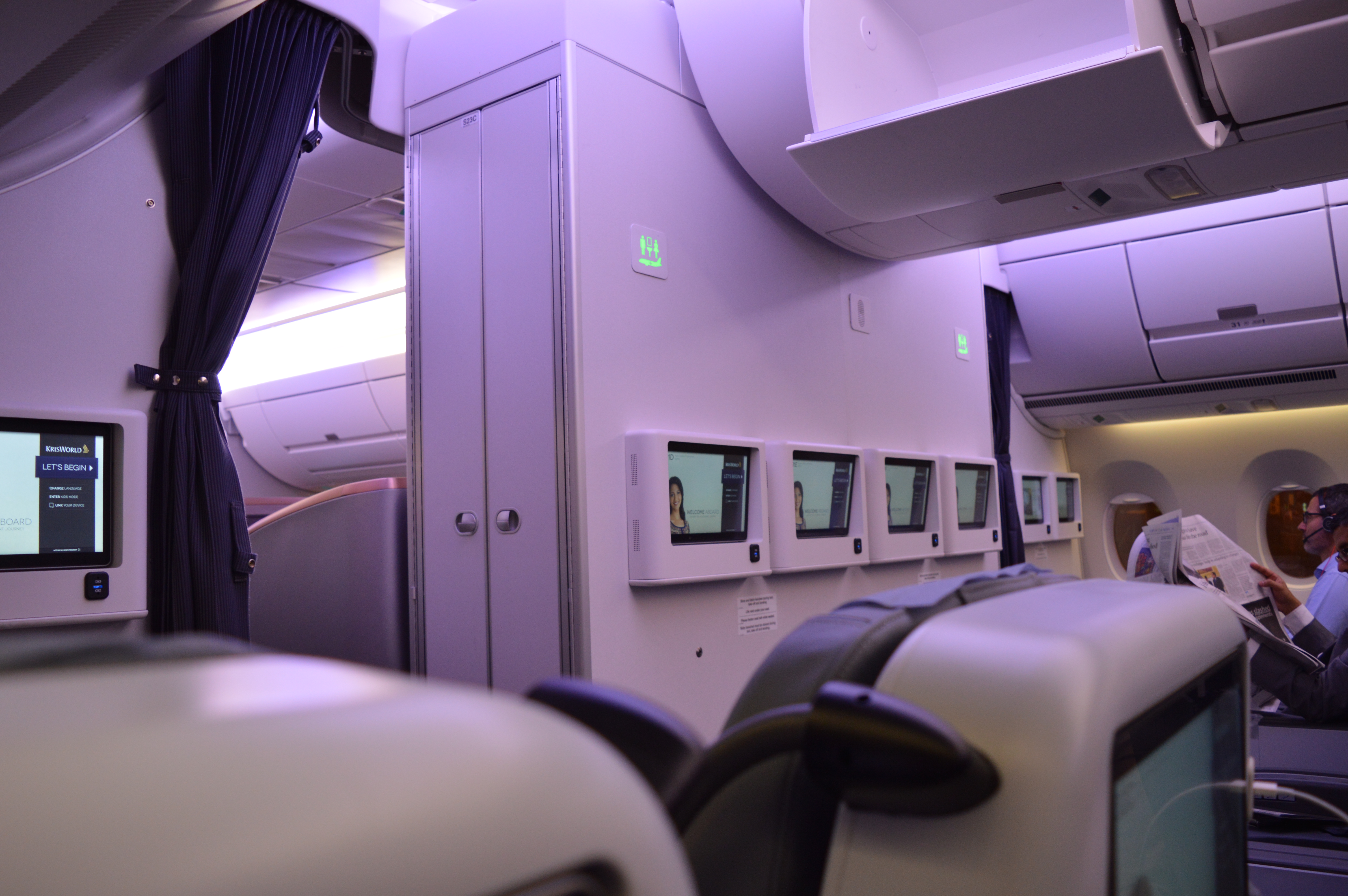 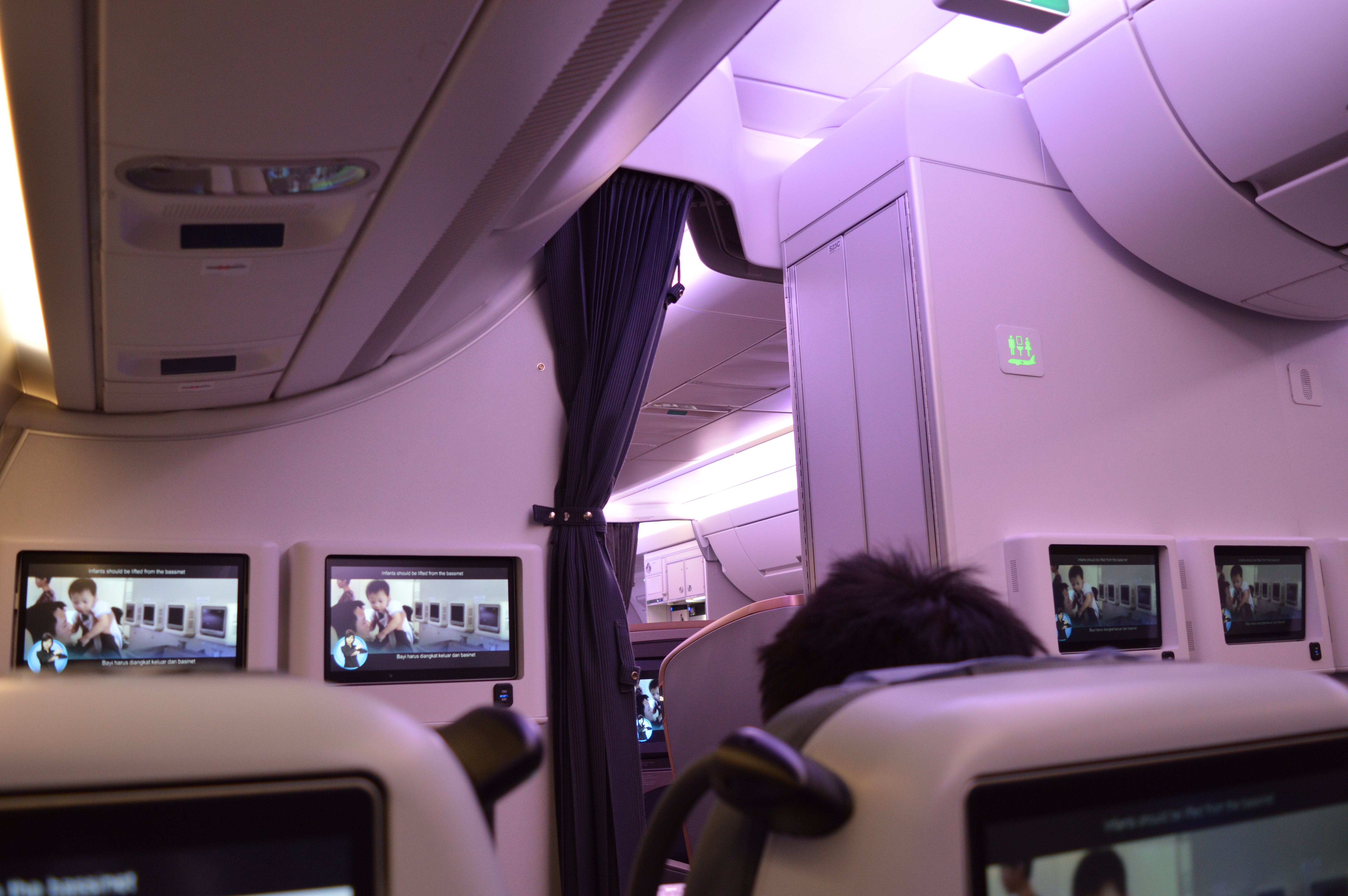 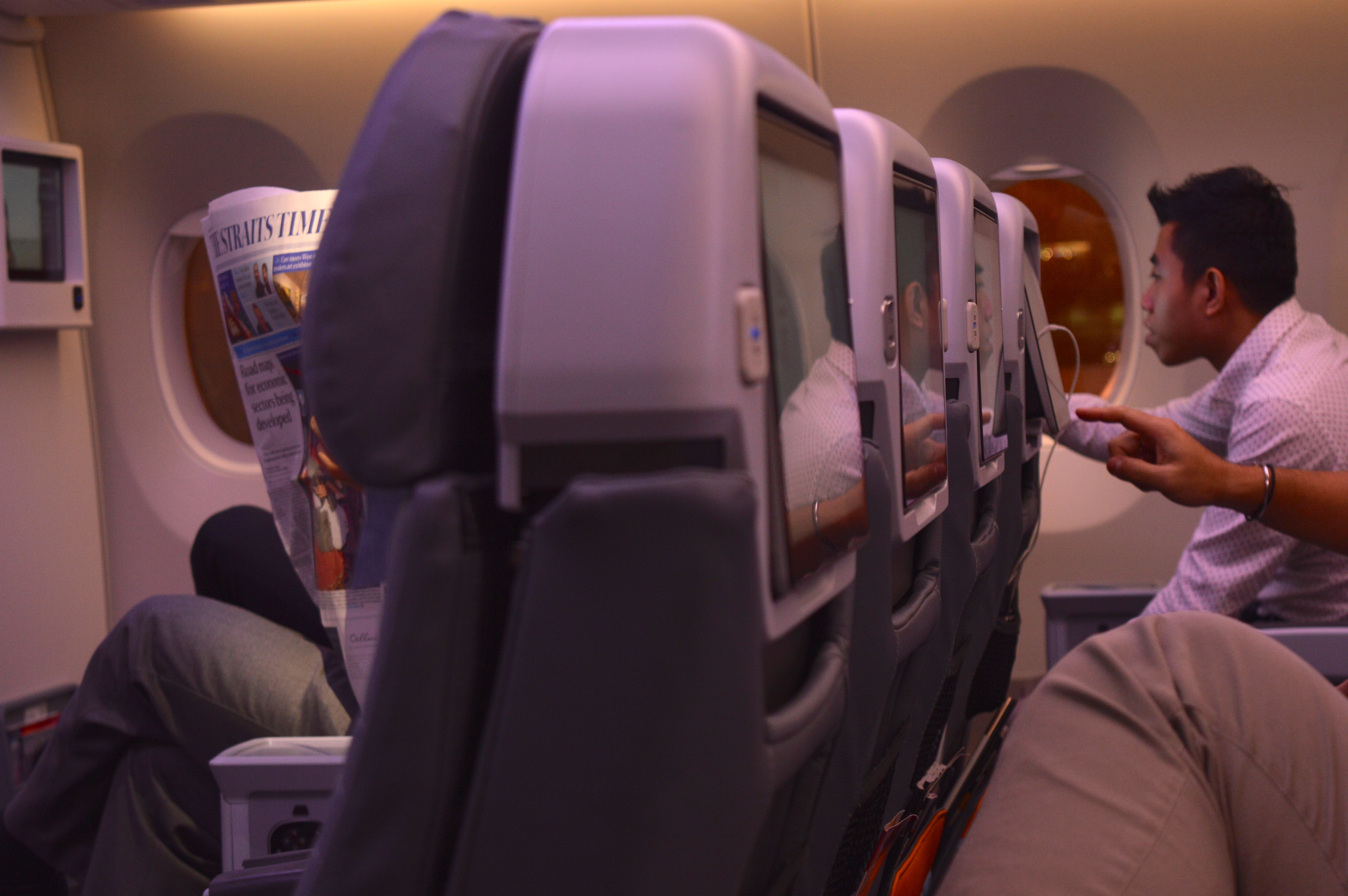 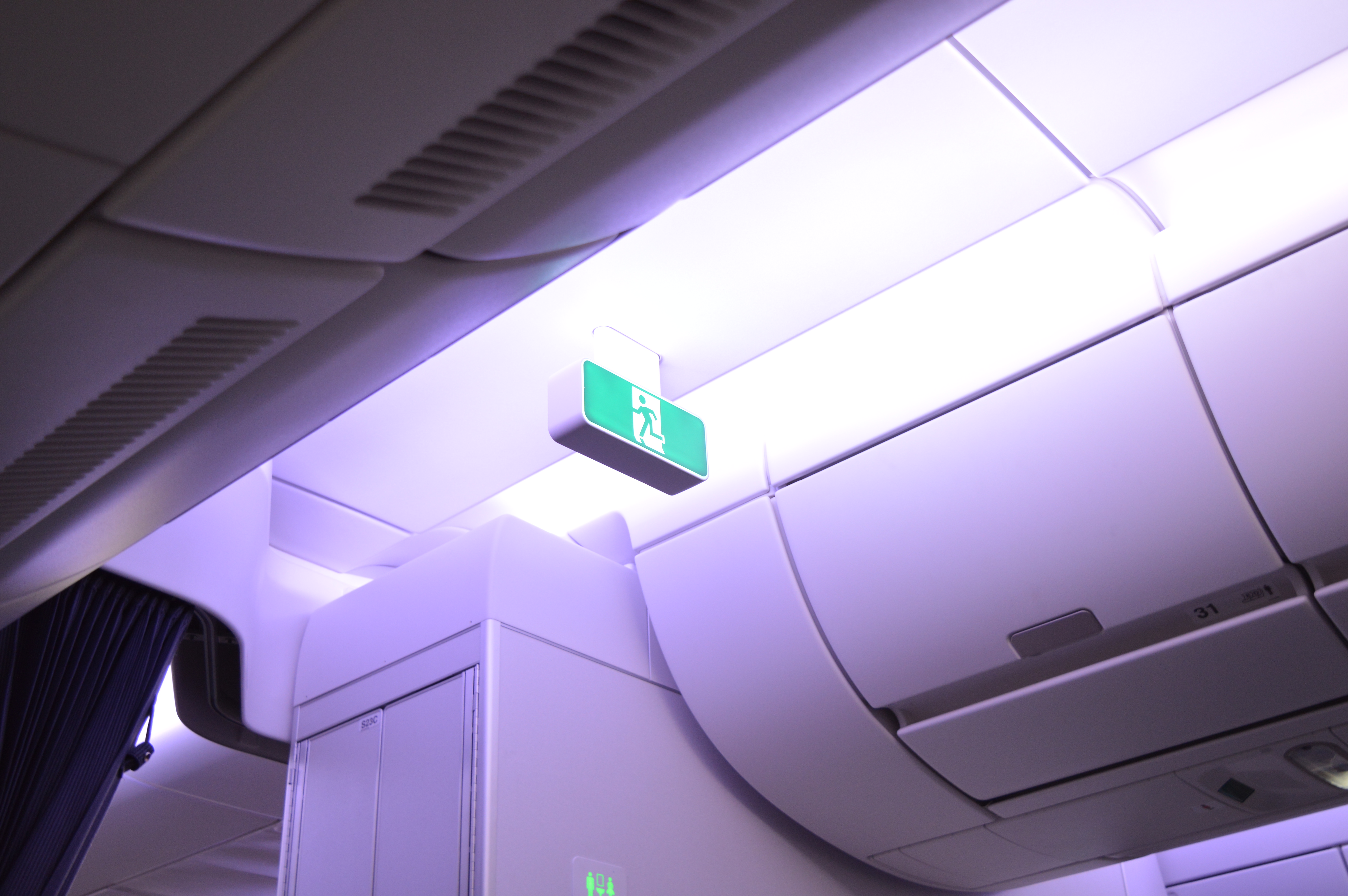 The A350 exit signs take the form of conventional signs, as opposed to the white and red “EXIT” that is displayed on other aircraft. This also doesn’t feature the cabin indicator lights (for internal calls, seat call buttons etc.).

The seat itself follows a very similar to design to those seen on the A380 and 777-300ER aircraft, offering ample legroom, adjustable reading lights, a cocktail tray, generous recline, a footrest calf-rest and plenty of storage. 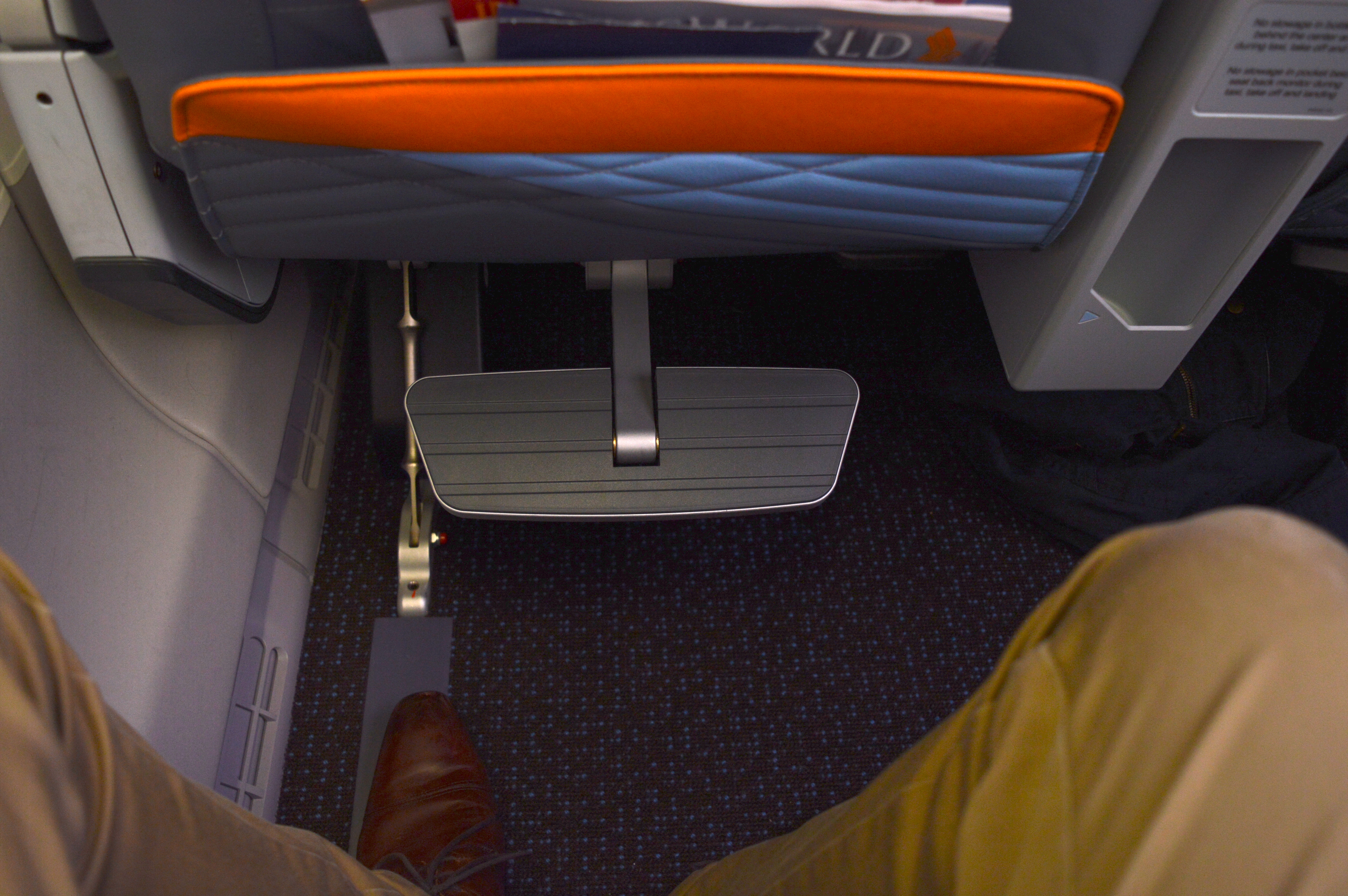 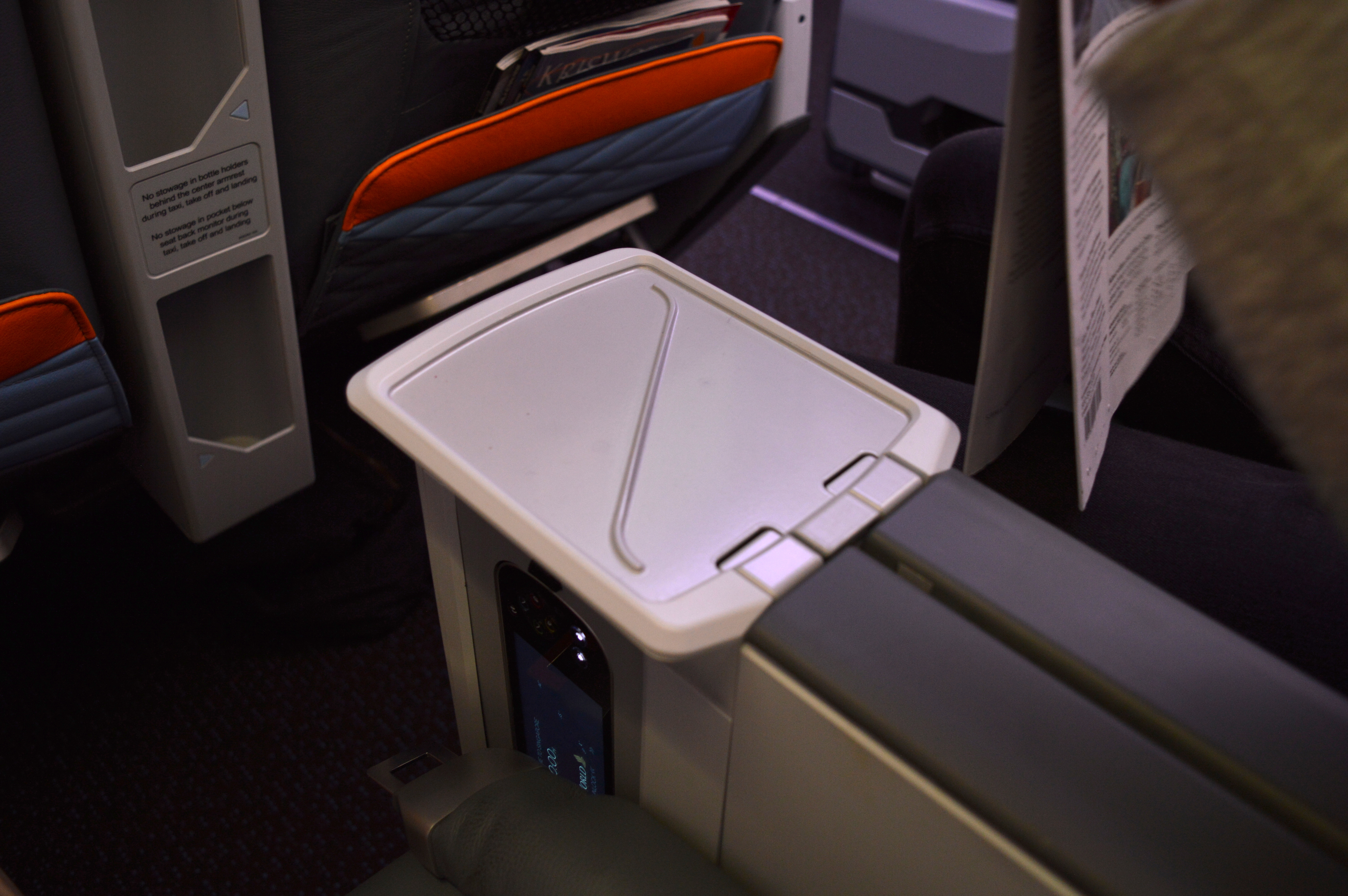 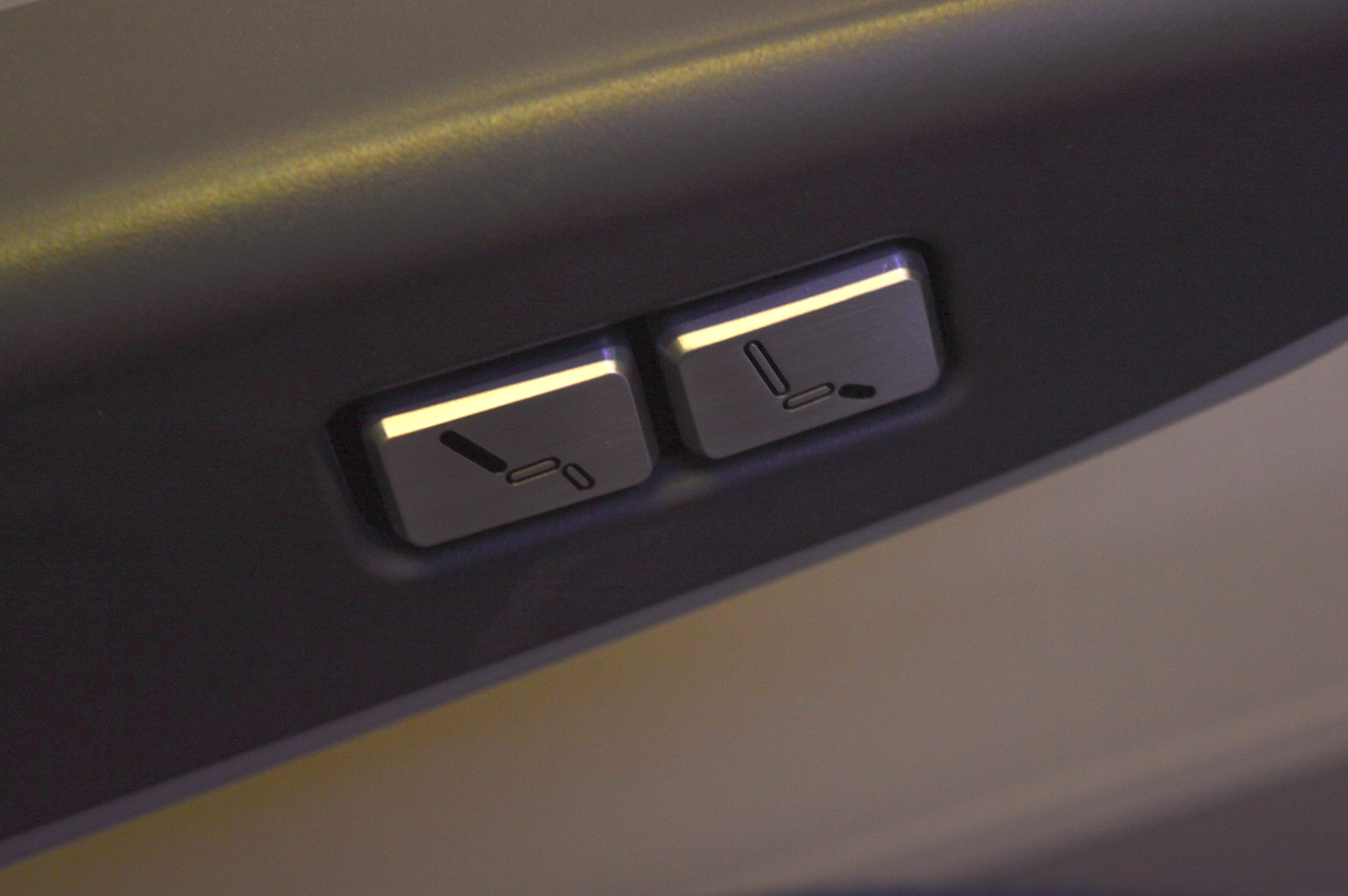 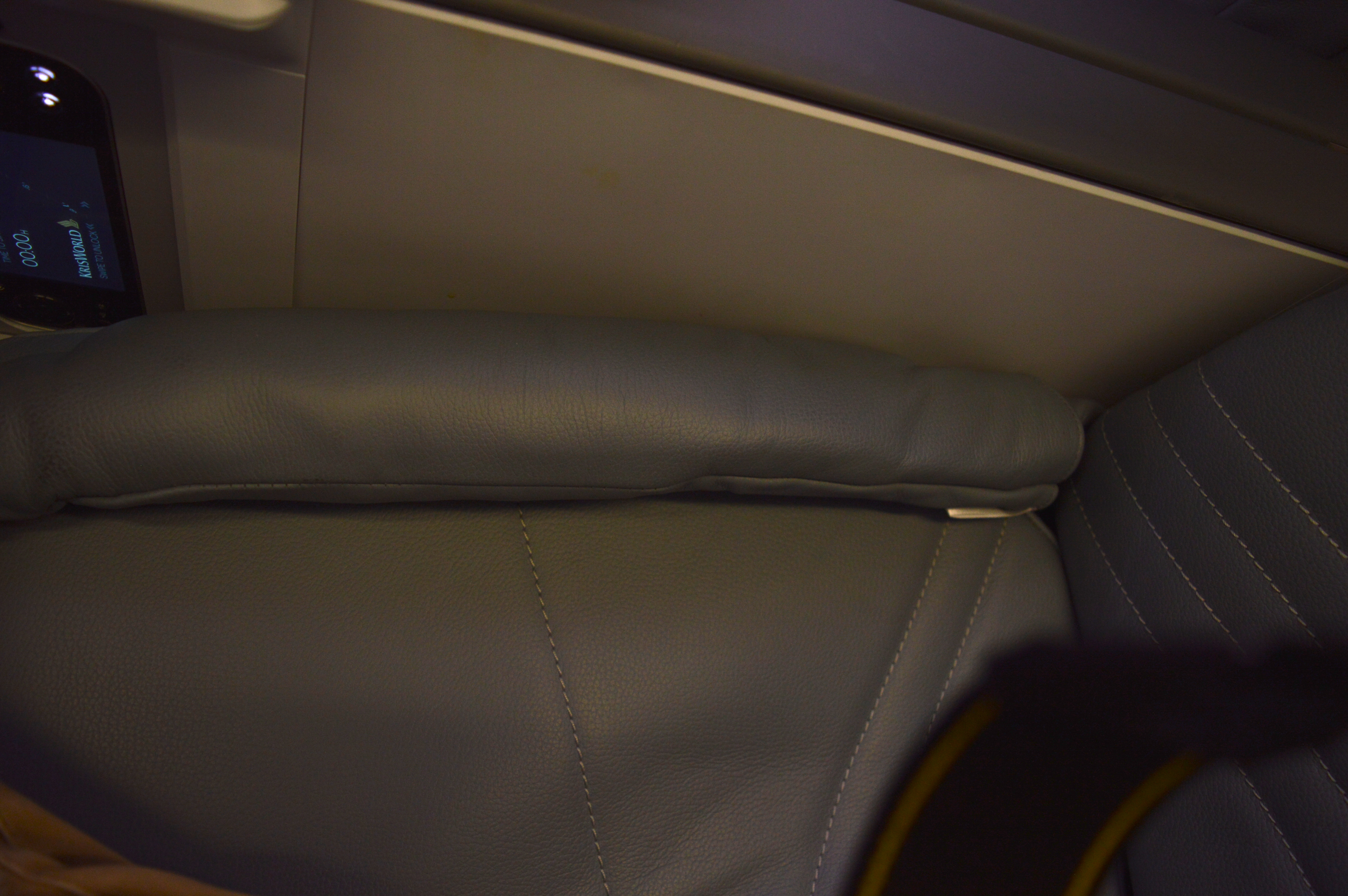 To comply with regulations, airbags were installed with all the seat-belts, similar to what is fund in the Business and First Class cabins. 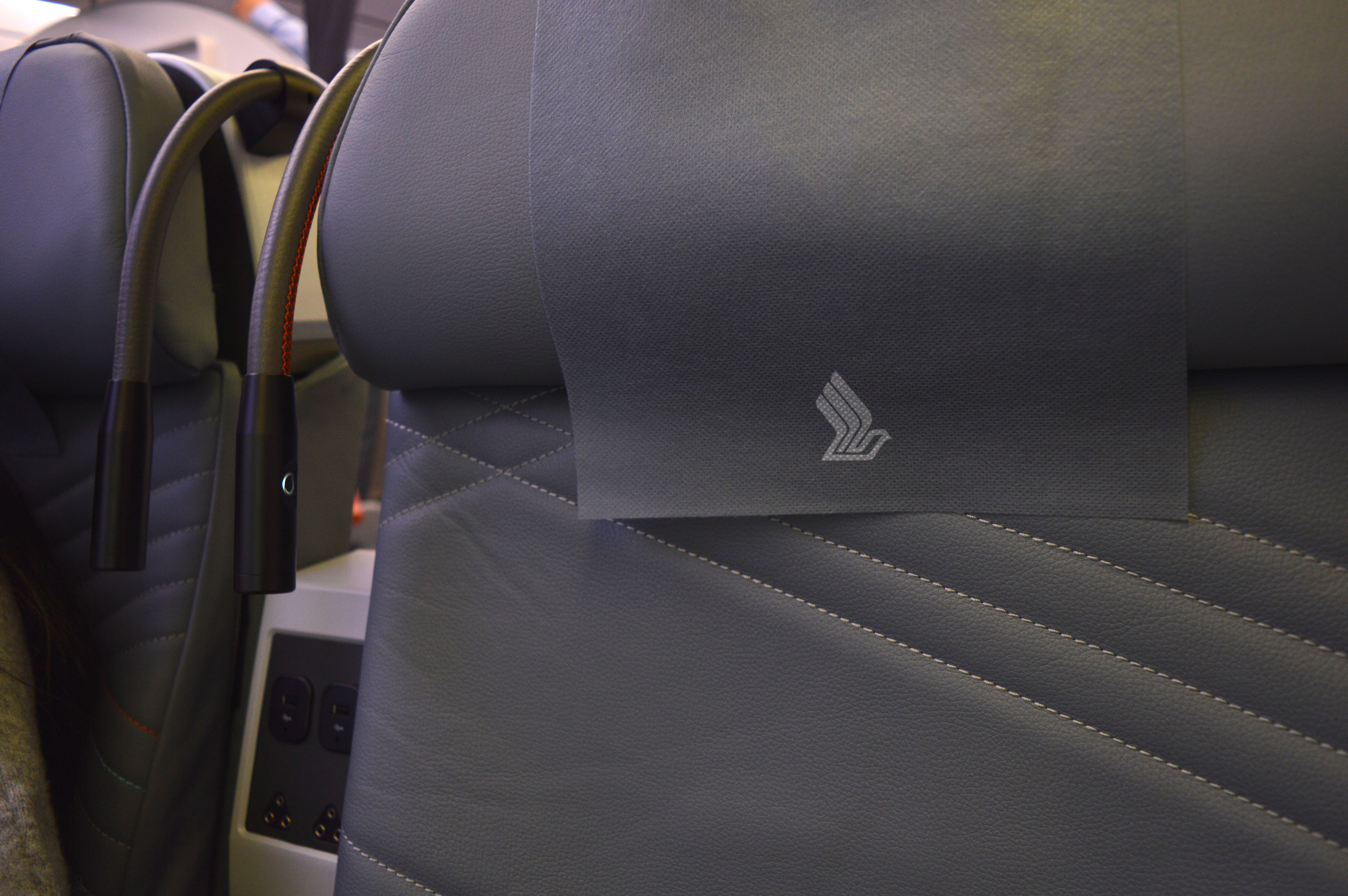 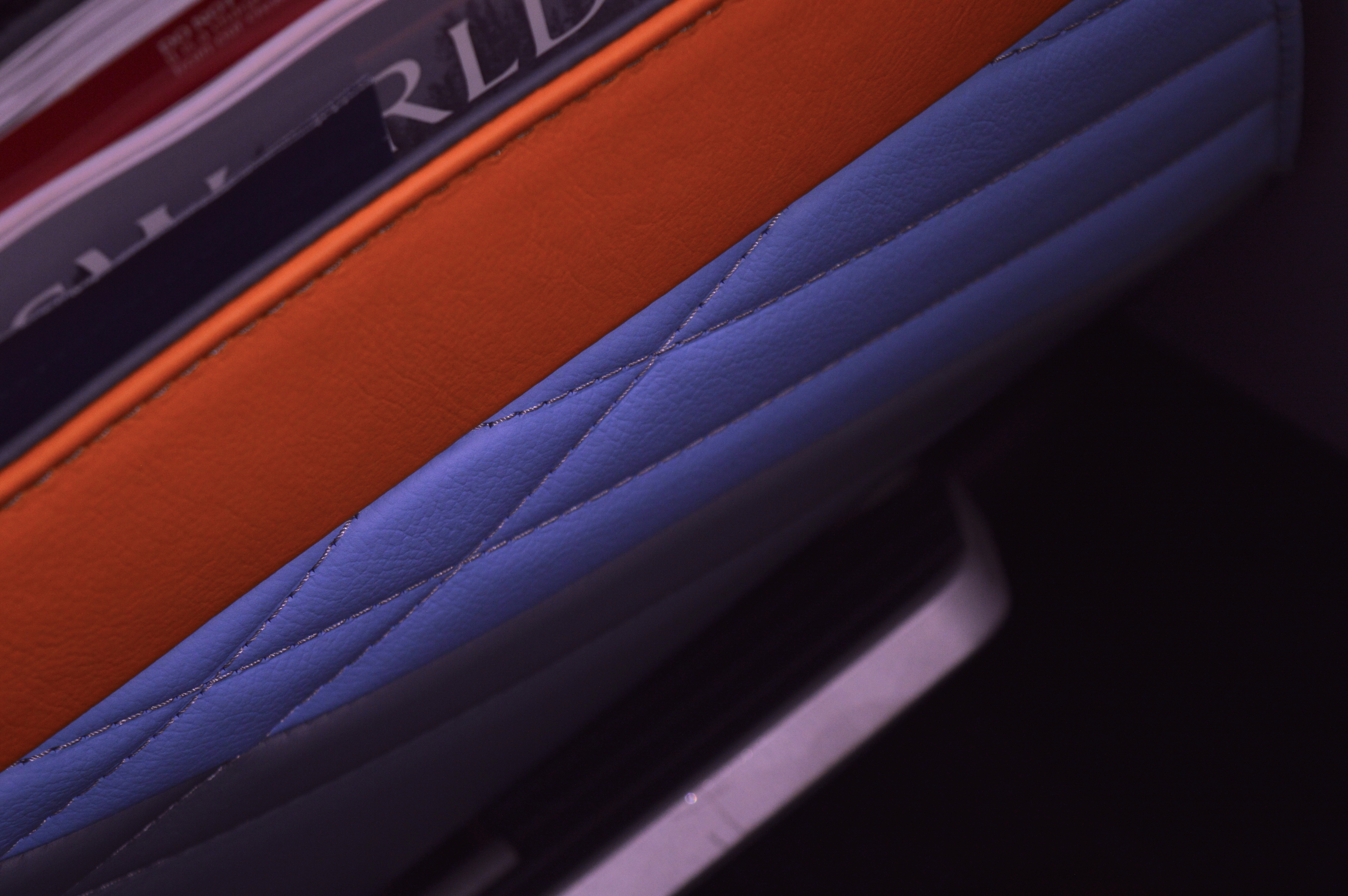 Following take-off, a drinks serviced commenced (only drinks, no snacks) for the Premium and Economy cabins, which was just wrapping up as we commenced our descent into Singapore. The tray tables are located in the armrest, and can be used either in full or half-size, both of which have an integrated cup-holder. 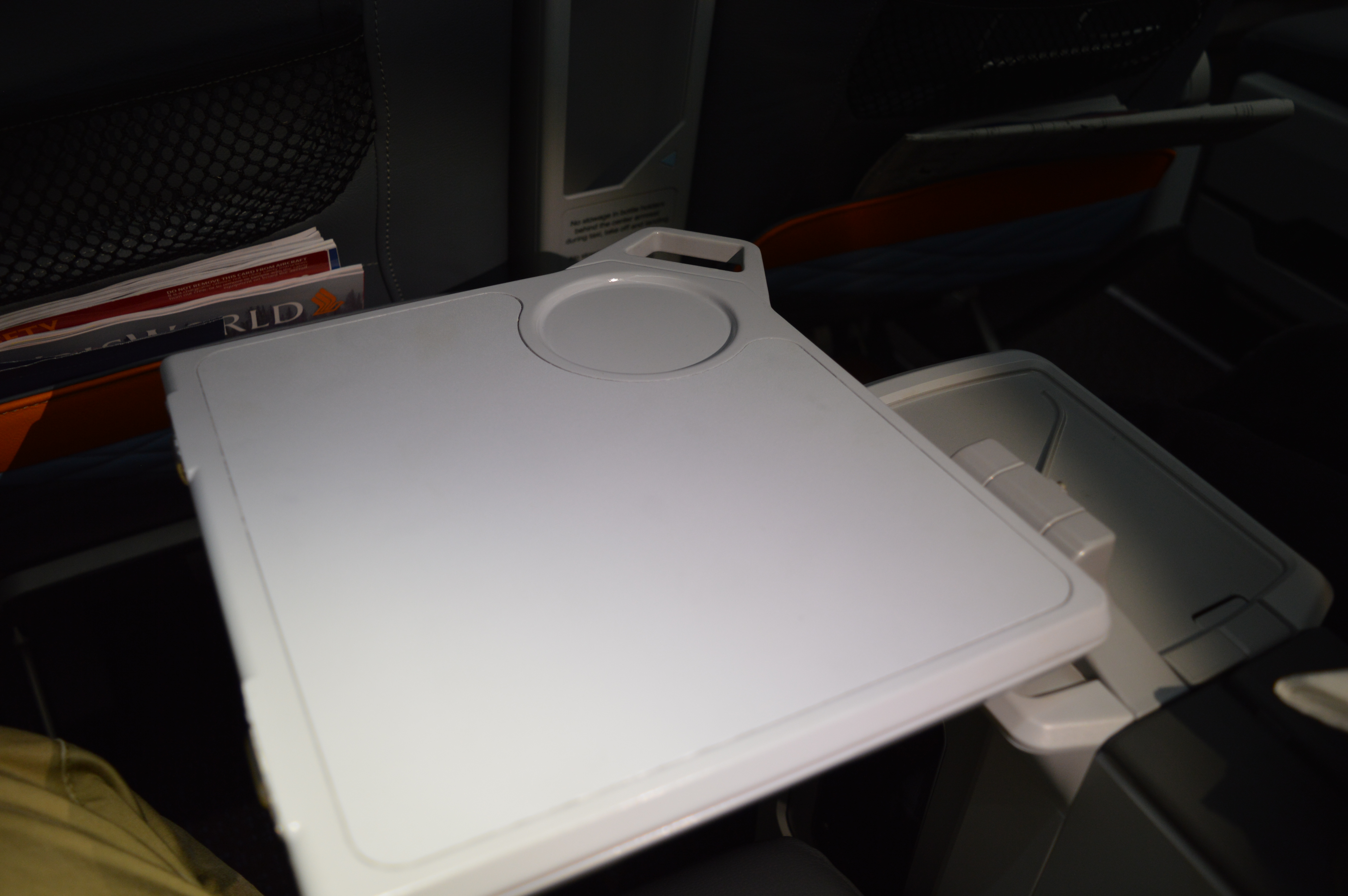 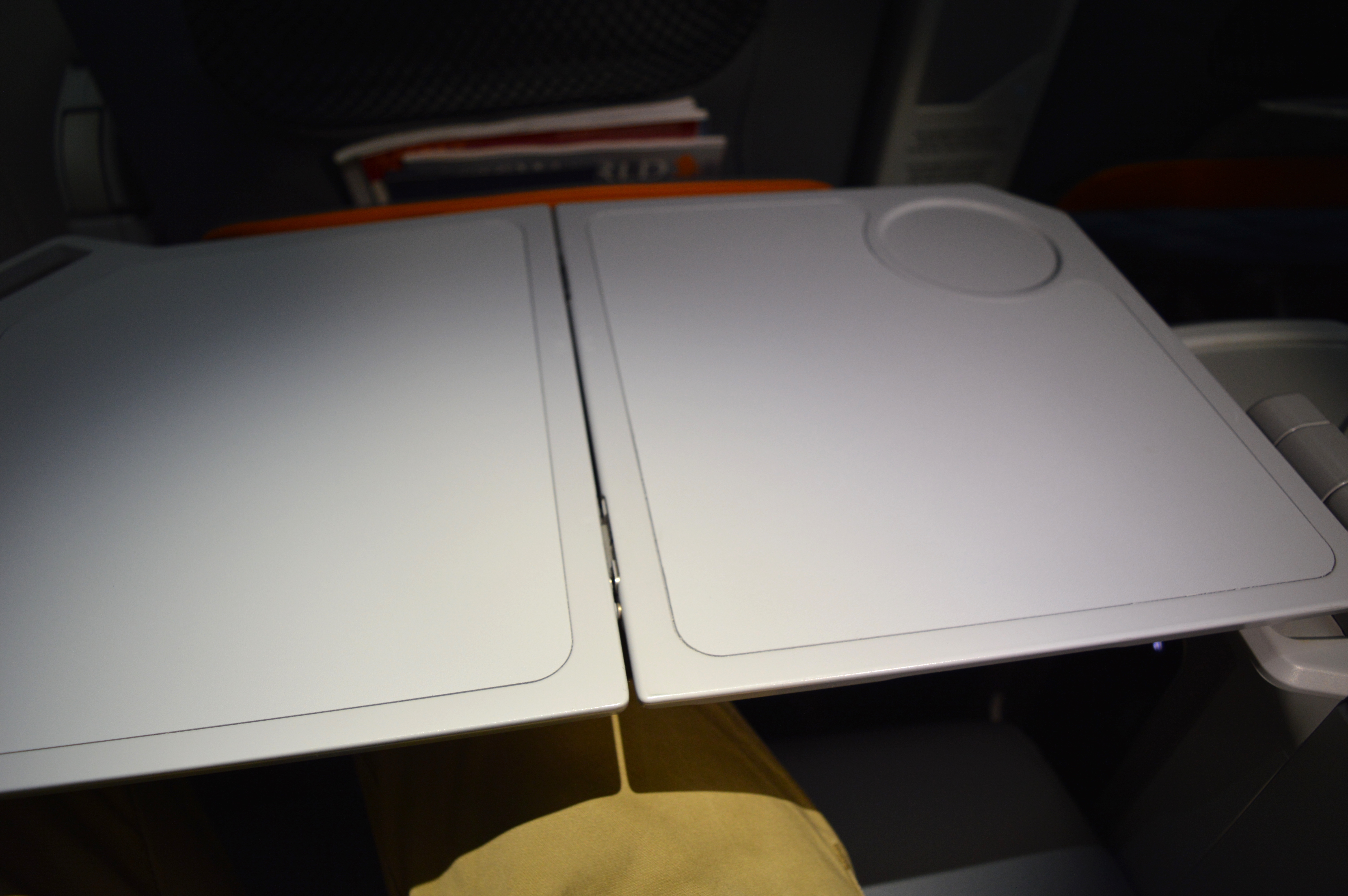 Once again, the landing was very harsh for some odd reason, but I suppose it is to do with the crew figuring out/ testing the automated landing systems..

Flying up to KUL and back on the A350 was an absolutely unforgettable experience, and I really look forward to flying the aircraft on longer routes in the future!