After an amazing day at the Melbourne Gran Prix, I made my way back to the airport, with my Dad. The taxi dropped us off right outside the terminal. A day prior I had selected my seat and was pleased to find row 4 had a single seat free! Row 4 is the front row of economy, which has extra legroom, thanks to the business cabin in front of us, as well as a feeling of exclusivity because the seats are usually reserved for gold and above frequent flyers. These seats are released to regular passengers 80 hours before departure. I was also excited to see the new online website which is a huge improvement from the old clunky and rather visually poor website, which now follows the same design elements to the new desktop site.

I had checked in online for myself and my father and had downloaded our mobile boarding passes for the flight, meaning we could walk straight through security having the no bags to check in. 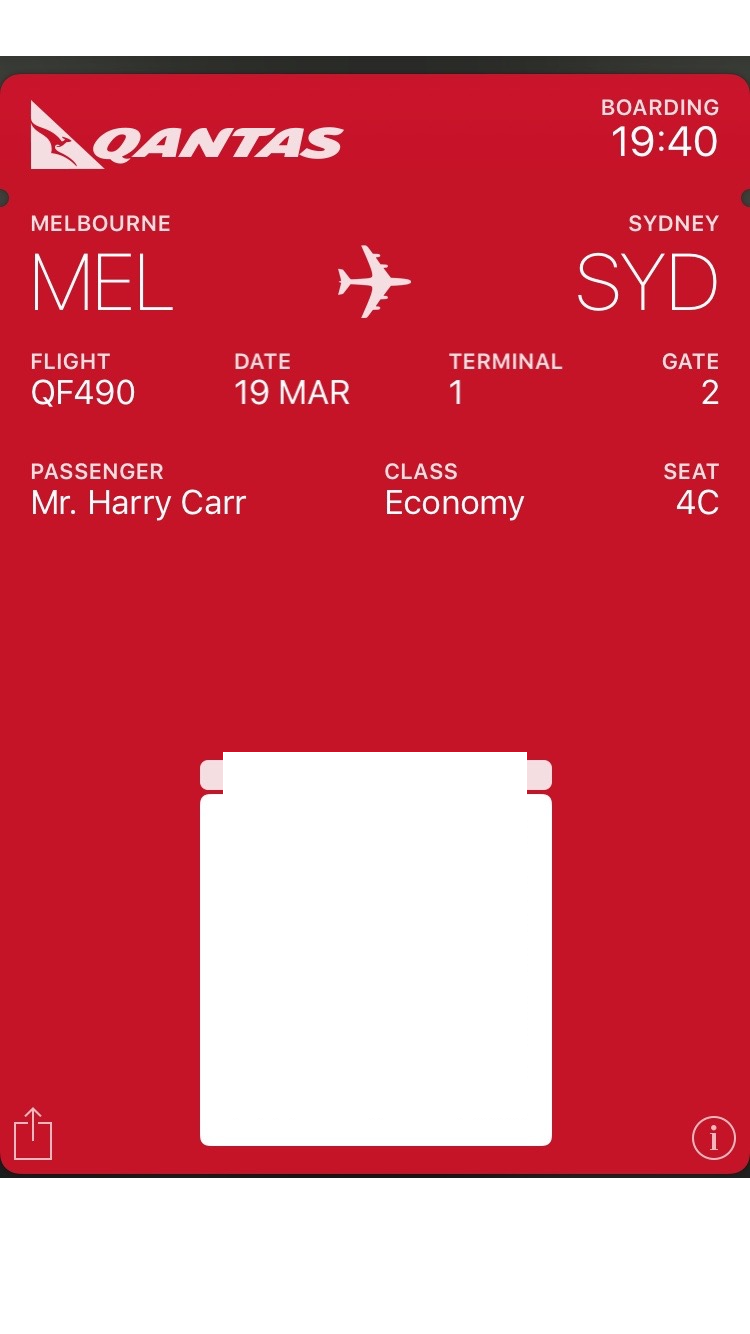 Security was super quiet, and within seconds my items were into a tray, and I was through security.

We then made the walk to the lounge, the lounge holds both the club lounge and the business lounge. The entry is just like the Sydney lounge, with an escalator up, and a convenient sign showing the new “controversial” dress attire rules. The friendly staff member at the entry counter was stood on our side of the counter rather than hidden behind a huge desk, which was more welcoming. She scanned my Dad’s boarding pass, and after a quick glance at the screen, she let us in. The lounge has a club lounge area and then a sliding door into the business lounge. We found some seats to put our things down before heading to check out the food options for the evening. They were as follows:

The curry and the rice were both fantastic and satisfied my hunger. Dessert included a biscuit and a few jaffas taken from the coffee station.

The lounge was quite large and was relatively empty. Most of the regular services, like a barista until noon and a bar noon onwards, weren’t operational, there were plenty of self-serve options to compensate. The lounge seemed a bit older than the one in Sydney and the buffet and bar areas seemed ready for a facelift. 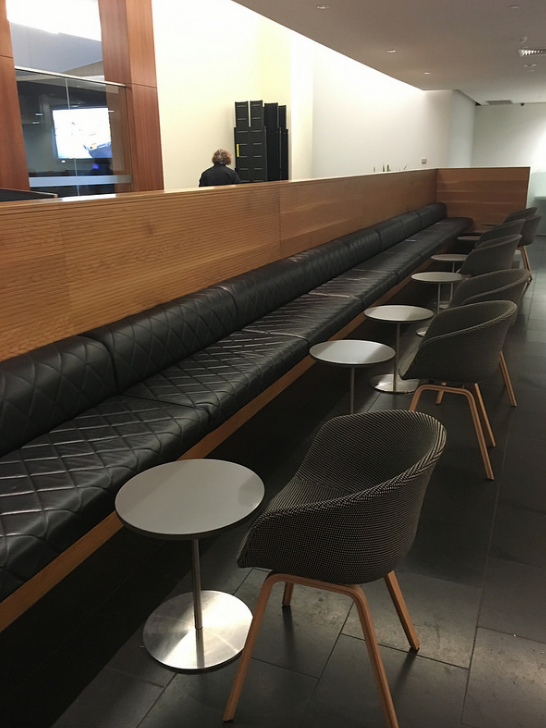 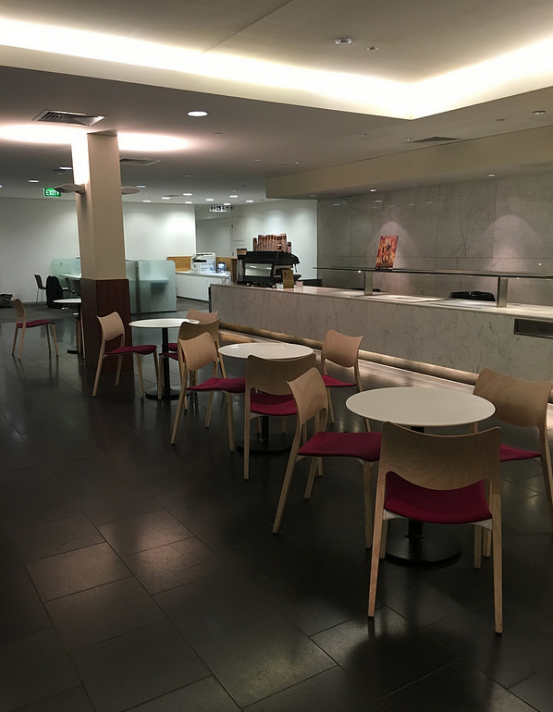 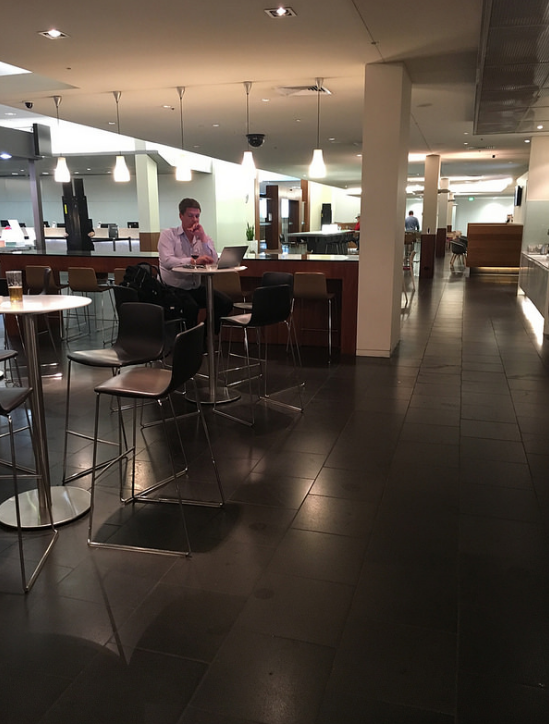 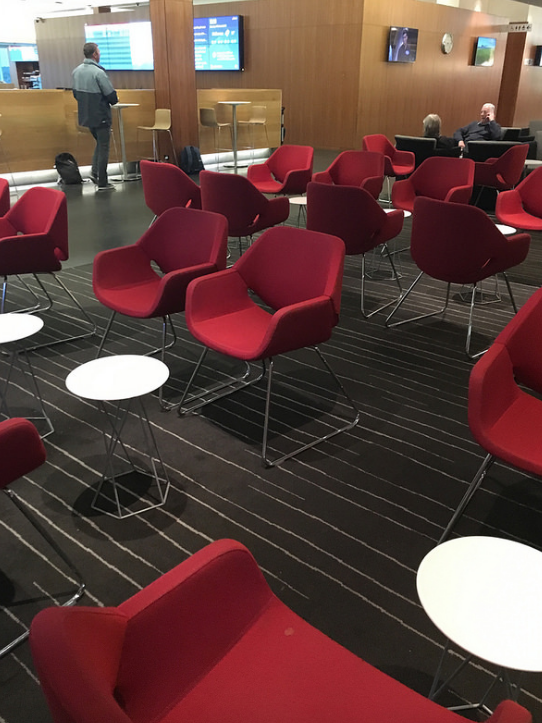 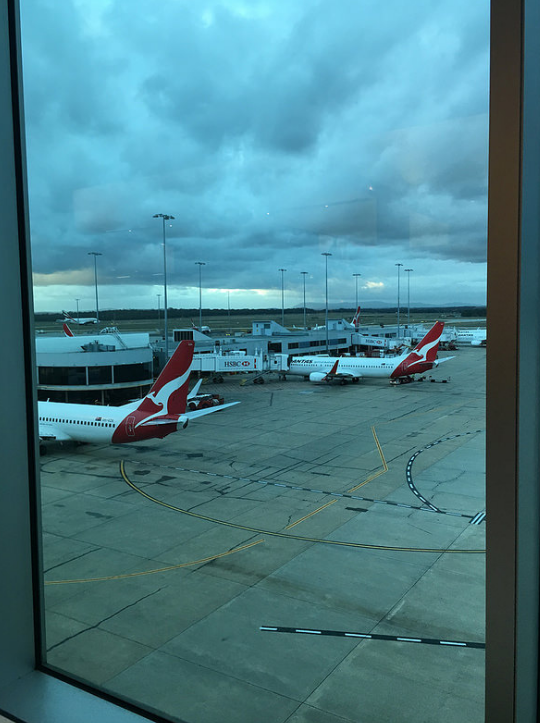 After collecting a towel bag, which includes a floor mat, full-size towel, and face towel from the reception desk I made my way to the showers. I had to then wait 10 minutes for a free one. The woman at the counter proactively offered my a toothbrush, which was nice. Once I got in the room it wasn’t as pristine as I expected, with water on the floor and the room wasn’t particularly clean which was disappointing. Once I had finished, I proceeded to use one of the charging stations in the lounge, before being sent a notification by Qantas, saying that my flight has started boarding 5 minutes prior. We packed up our things, left the lounge and made our way to the gate. 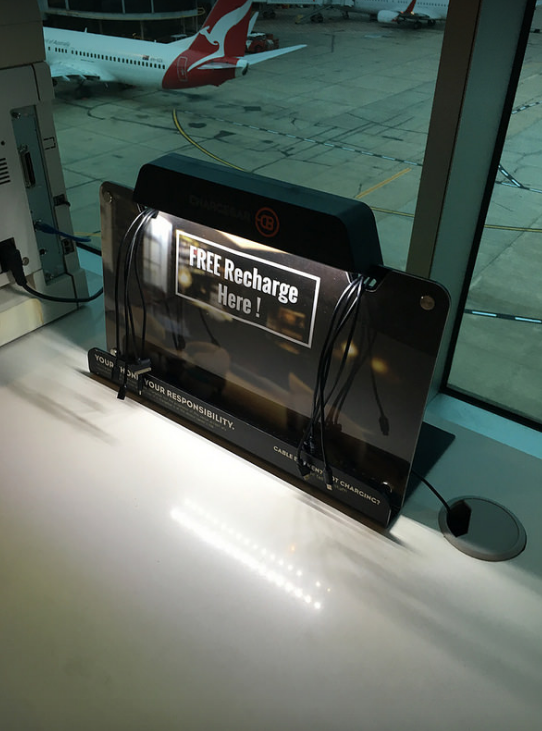 A brief and leisurely walk meant we arrived at the gate as they were beginning to complete boarding. There was no line this time, and using my mobile boarding pass, I made my way to the aircraft. There was a short line in the aerobridge, but it moved quickly.

The Cabin Service Manager welcomed me onboard, and I made my way to my seat. I was super excited because I had a very special seat today, which is normally reserved for Qantas top tier frequent flyers, but 80 hours prior to departure, they release these seats for regular passengers and I was able to select the first row of economy class in the left aisle seat.

About five minutes after being seated, we pushed back on time and with a take-off only a few minutes later. The seatbelt sign was switched off 3 minutes after take-off and the service promptly began. Qantas offered two menu items and a selection of soft drinks offered as complimentary items while alcoholic beverages could be purchased. I had the Asian chicken and glass noodle salad, which was served cold. The service was super warm and friendly and this time, I felt like I was getting the Qantas service I expected. There was a hot option of a creamy pasta, which didn’t sound or look appetising in my opinion. The salad I chose was  delicious, slightly spicy and very flavorful, though the chicken was a little bit dry. Not bad for a short domestic flight. I also had a ginger beer, since iced tea wasn’t available. C’mon Qantas, even Virgin Australia offers an Iced Tea! The meal was super filling and hit the spot, my seat neighbour, a friendly Sydney local lady who had headed down to Melbourne with her partner also loved the salad. 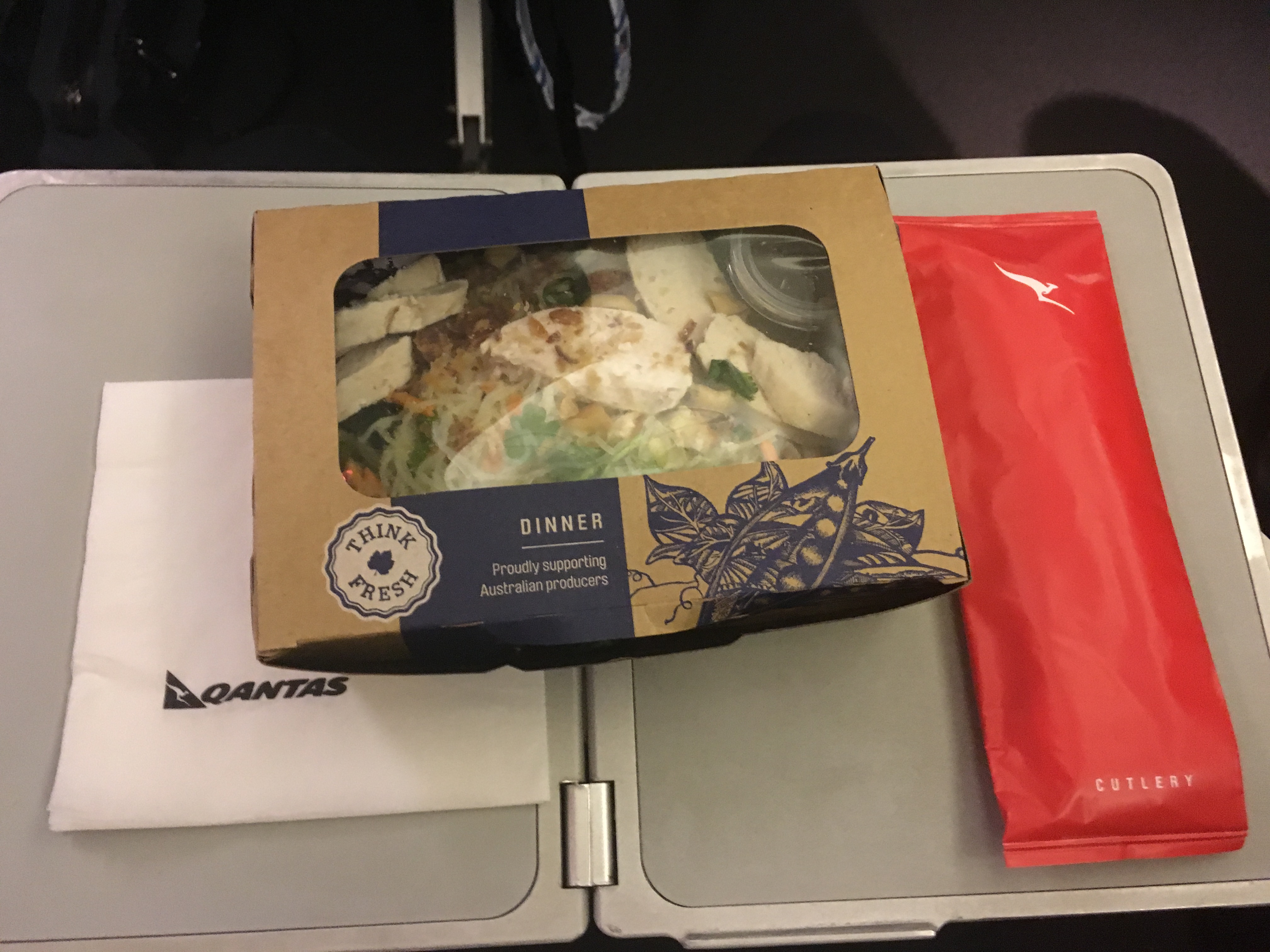 Despite not being one of the new Boeing Sky Interior fitted 737s, which features the same high ceilings, LED lights and larger drop down overhead bins which fit more bags, (and prevent locker wars) as a 787, it was to my excitement one of the newly refurbished 737s which features new seats and the new smaller lavatories which give the space for an extra row of economy seating. The seat was very similar to the one on the new A330. You can read a review of that here. The seat was very comfortable and I had the room to stretch out my legs being in the first row. The only thing that divides the business and economy cabin is two overhead screens that hang from the ceiling and cover the gap between the roof and the top of the business seat, which gives the cabin a very open feeling. This meant that I had a view into the Business cabin, and from what I could see and hear, it looked like they were getting what they paid for! The Cabin Service Manager seemed an awesome guy and sure made it a great experience for the customers. Being the front row my tray table was in the arm rest, reducing the seat width slightly and making the armrest immovable, but I prefer trays like this, as they can fold in half.

Qantas provides Wi-Fi to be used for their entertainment app available to download onto your own self-provided device. The app was the same as the one that is on the A330 iPads. The flight time remaining seemed to be a bit dodgy, telling us it was 5 minutes to arrival when it was more like 35! My neighbour seemed confused too, and after checking our boarding passes we came to the realisation that it was a fault in the app. On each seatback, there was a slot for an iPad to be hung. There were also Foxtel TV shows playing on the fold down screens overhead. 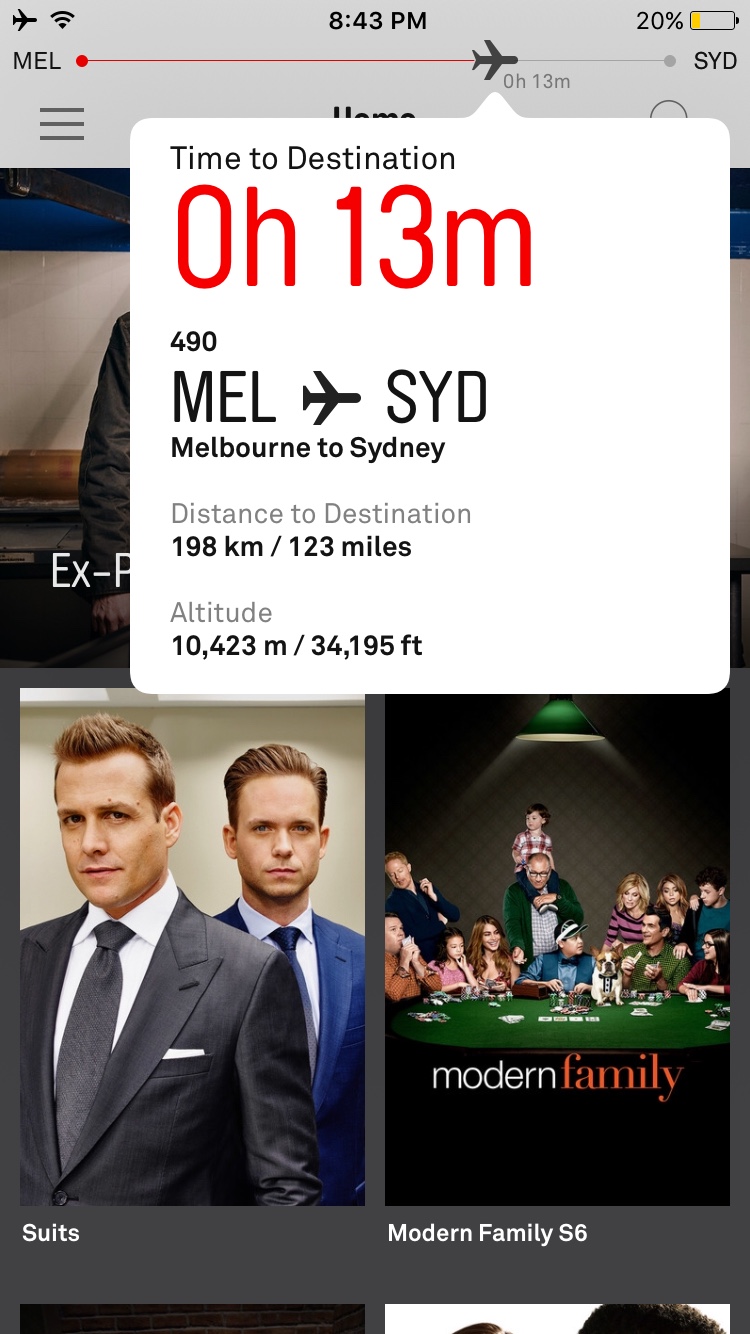 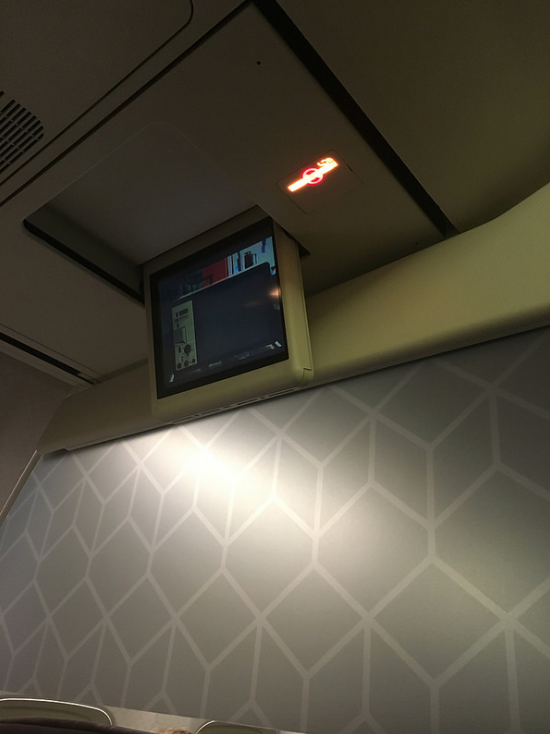 I then got up for a quick walk and to check out the lavatories, and ask for the Pilot’s names plus the aircraft registration. Walking down the aisle I realised how tired I was, but also noticed a whole heap of passengers with Lindt balls, how come I didn’t get a Lindt ball! I guess they mustn’t have had enough for everyone and they would rather give them to the passengers at the back rather those at the front, to stop the awkward apology to those seated in the last rows. Oh well… The new lavatories have an extremely thin design, saving as much space as possible, and it was pretty cramped. I then asked one of the crew who seemed to be really enjoying her salad for the pilot’s names and the aircraft registrations. 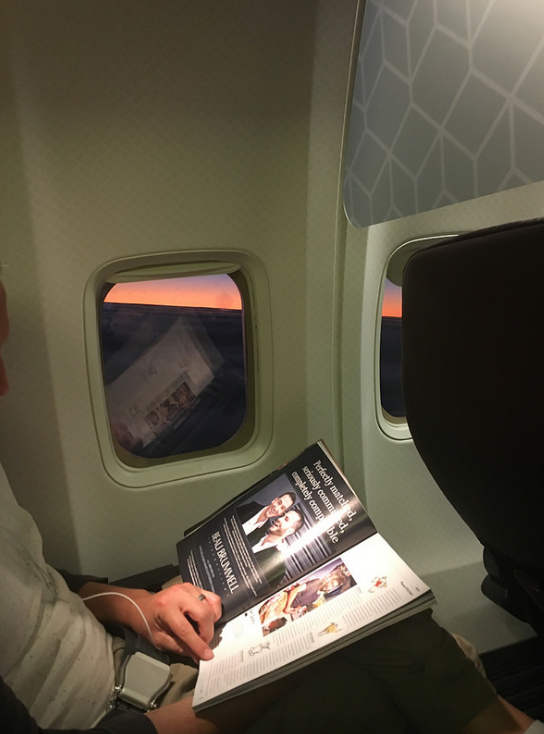 The rest of the flight was pretty uneventful and as usual. After landing on the main runway and a short taxi, we were at the gate.

Soon I disembarked and was welcomed back home! Our arrival gate was the furthest from the exits which was a little annoying especially when the travelator was broken. Our flight was the second last to arrive for the evening so the terminal was pretty much closed. A short walk took us to the exit and ended an awesome day. The flight was short but enjoyable, and the first row was a pretty cool experience.