Just a quick trip with a new (for me) and reputable airline.

NOTE: Many of the pictures/ details about the Business product have been left out, as they are available in the more comprehensive outbound report (Singapore – London)

Before I begin, I’d like to touch on an issue with SIA. Now, just like almost all other Asian carriers, SIA does not offer a chauffeur service for Business/ First/ Suites. Now what disappoints me is that carriers like Qantas offer this for both Business and First, complimentary. I understand it is a high expense for the airline and may not be viable, however, I think they can innovate in some situations. For example, for flights in and out of London, Business and First/ Suites passengers should be given a complimentary ticket on the Heathrow Express’ Business First section. Sure, it’s only a 15 minute ride, but by adding this to the ticket, there’d be just that little bit of competition with regards to chauffeur services. Hmm…

Anyway, after quite an incredible trip, it was finally time to head back to Sydney. The journey commenced with check-in at London Heathrow’s ‘Queen’s Terminal’ (T2), a spectacular new space exclusively for Star Alliance passengers. Economy passengers for all airlines are directed to self-service kiosks, while Business and First Class guests are invited to normal check-in areas. At the SQ premium desk, a lovely Heathrow Airport staff member was on hand on the passenger side to assist with luggage. He was warm and friendly, and happily placed luggage onto the scales, as well as removing old luggage tags. I had never seen such a thing carried out anywhere, and was astounded. What a great start!

The fault with T2 is that there is often an incredibly long walk from the security checkpoint to the gate. The duty free shops are located just near security, however it can tae around 15-20 minutes to walk from there to the lounges and gates for Singapore Airlines, Air Canada and other carriers. I don’t see why they don’t, like other airports, implement a skytrain system. It must be quite a pain without lounge access, as you’d have to be well away from dining and shopping for a significant time, to ensure you’re not late to board.

The new SilverKris lounge is beautiful, and has the same decor style as the new lounges in Singapore, Manilla and Hong Kong. A generous buffet is on offer, as well as a tendered bar. Shower facilities are available, however, at the time many were out of order and it was all very busy. I ended up on a ‘shower waitlist’ and was given a buzzer that would ring when a shower was ready. However, the list had barely progressed by the time boarding was called. 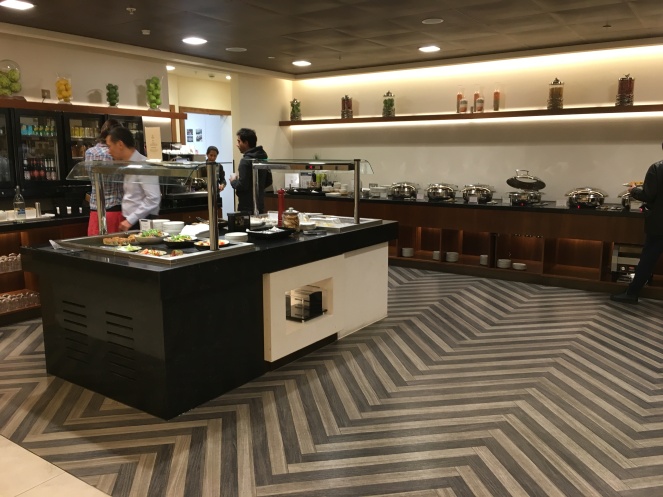 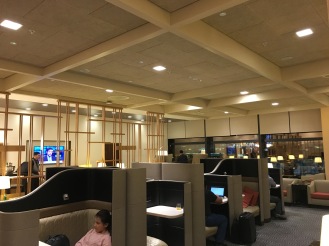 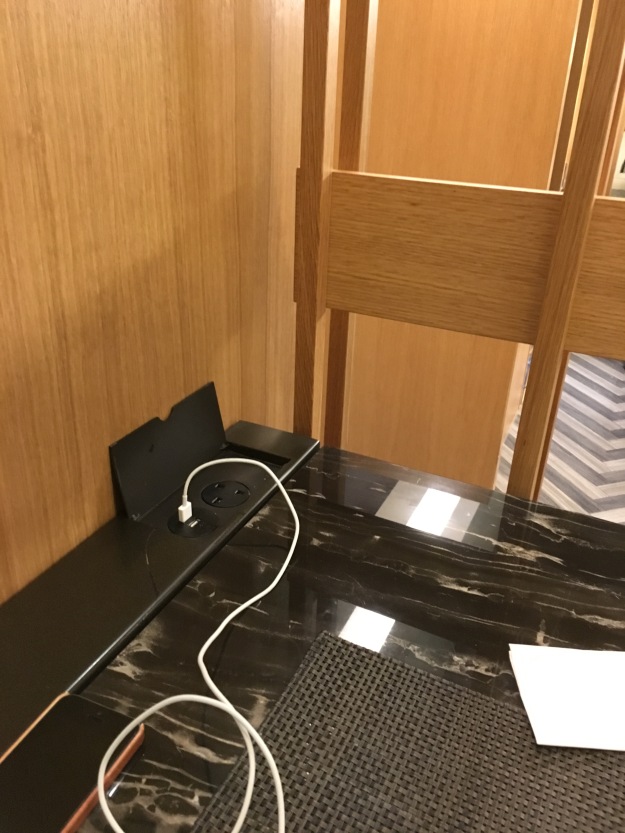 After boarding towards the end, even after all of Economy had boarded, we were welcomed aboard and took our seats. I was once again seated in 96K, in my opinion the best seat on the upper deck. The stewardess then came over and asked whether I would like to move, because the galley noise can sometimes be a bother, but having had a great experience on the last flight, I declined. The whole of row 96 was empty, and the rest of the rear cabin was fairly clear. In the pre-flight duties, the crew took orders for supper, served a welcome drink and introduced themselves.

Following a little extra time on the ground, and a few conversations with the crew, we pushed back and took off. Some more drinks were served along with warm nuts, after the seat belt sign had been turned off. 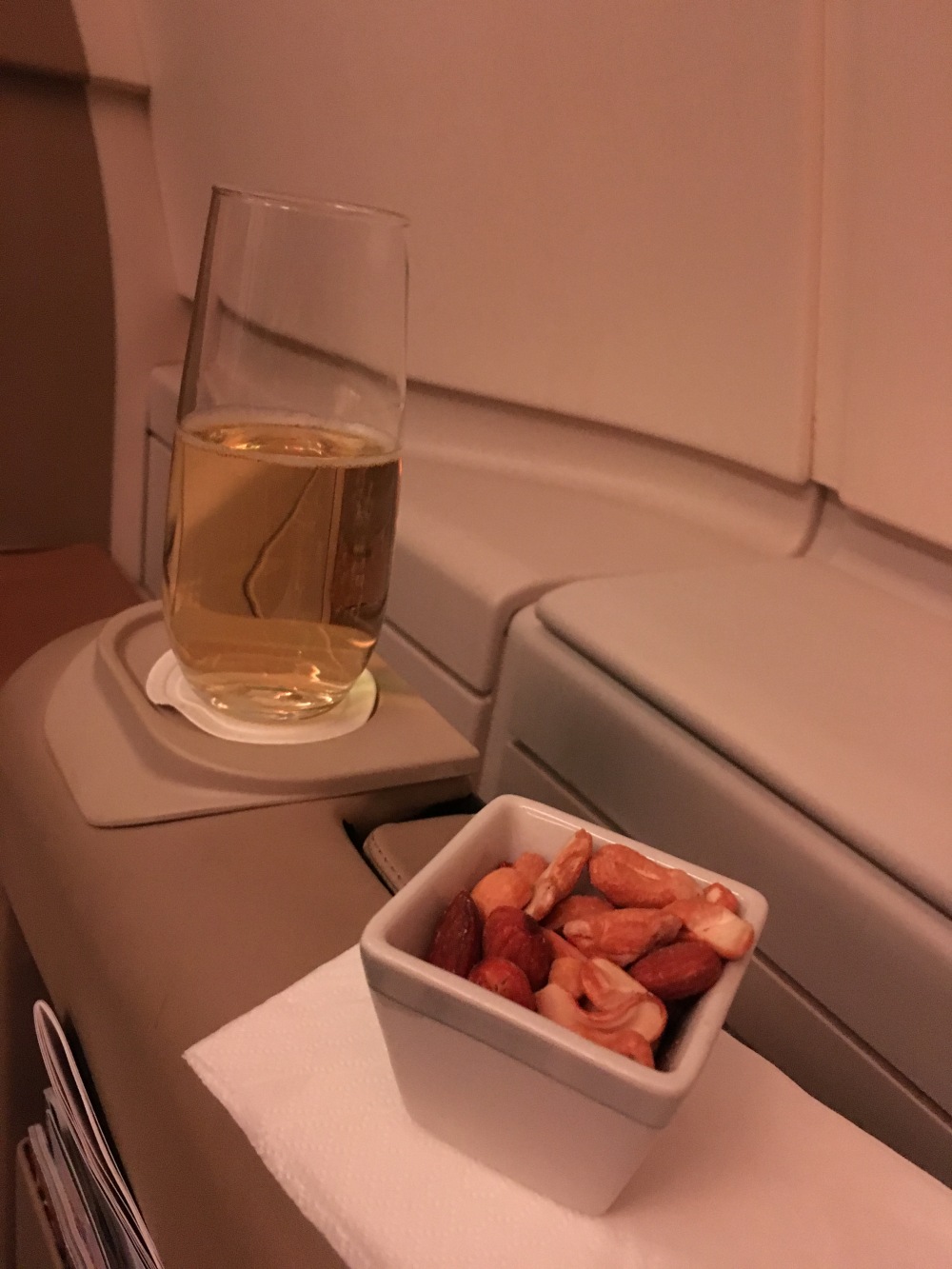 In a little while, the supper service began, and was actually a lot more wholesome that I expected. Despite the somewhat late at night departure, a full 3 course meal was served, as opposed to the express meals served on really late, red-eye flights. 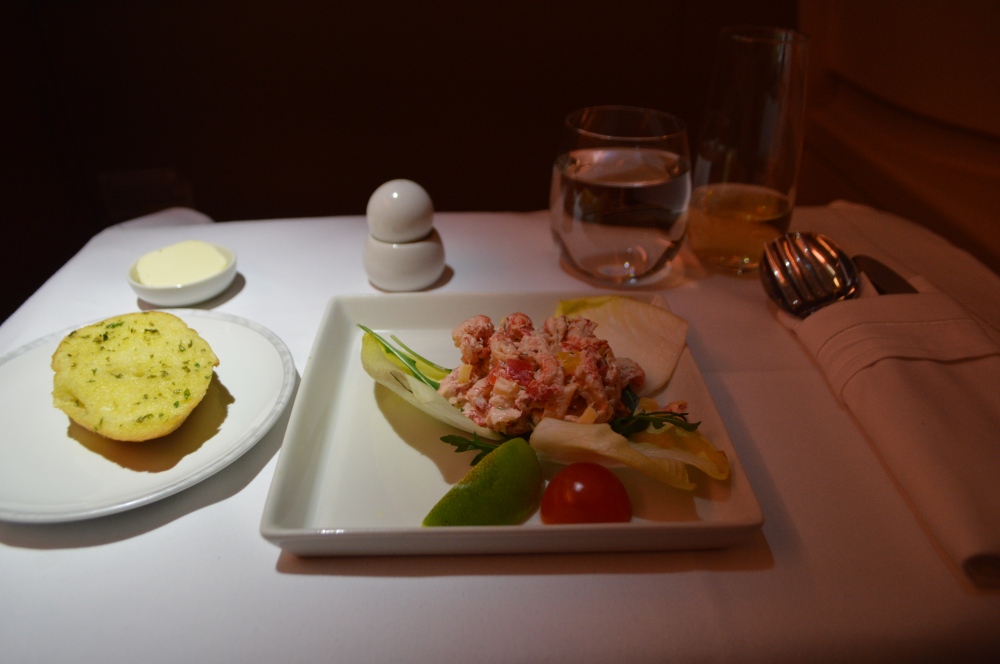 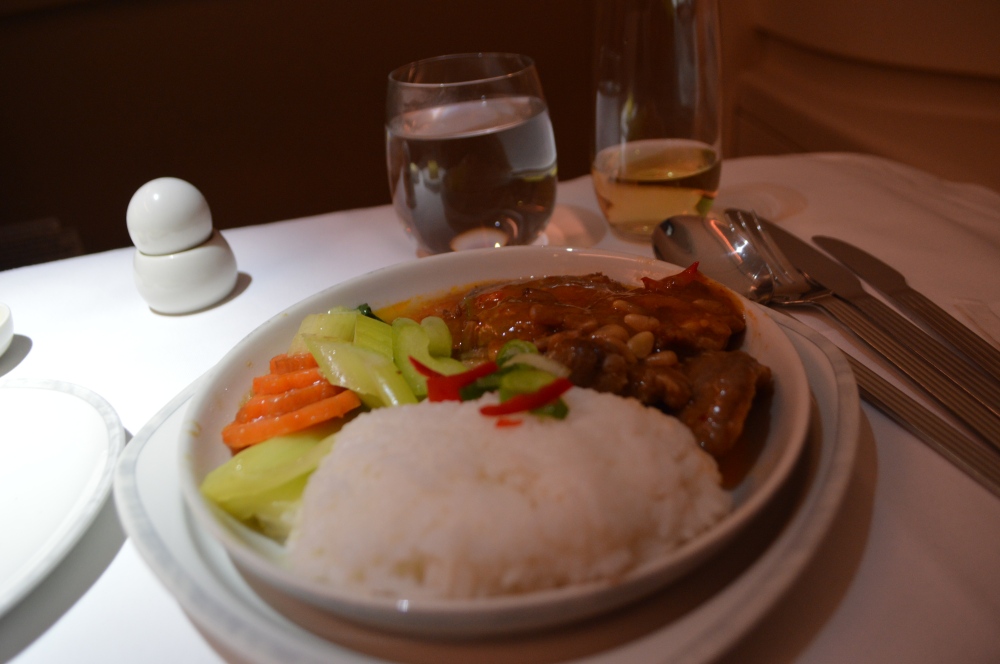 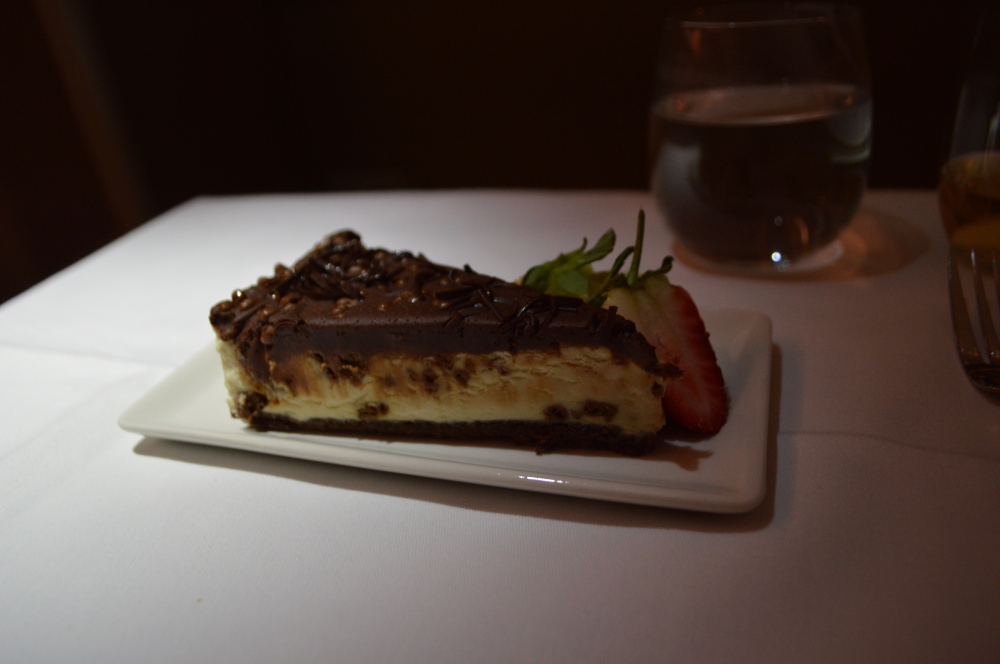 Following dinner, 3 crew walked through the cabin, almost in a line, and each served a ‘Charbonnel et Walker’ chocolate box, a bottle of water, and finally a hot towel (I can’t imagine how many hot towels are loaded on SIA aircraft!).

On the outbound flight (SQ308), a meal was served straight after take off and then again about 7 hours before landing. This was because of a really long duration as well as daytime flying. On this route, however, supper was served straight after take off, and breakfast served 2 hours before landing, leaving the bulk of the flight for rest. This is understandable, given the night time departure and the much shorter flying time (this flight was more than 2 hours shorter than the outbound).

Breakfast was pretty wholesome, and served along with some annoying turbulence. 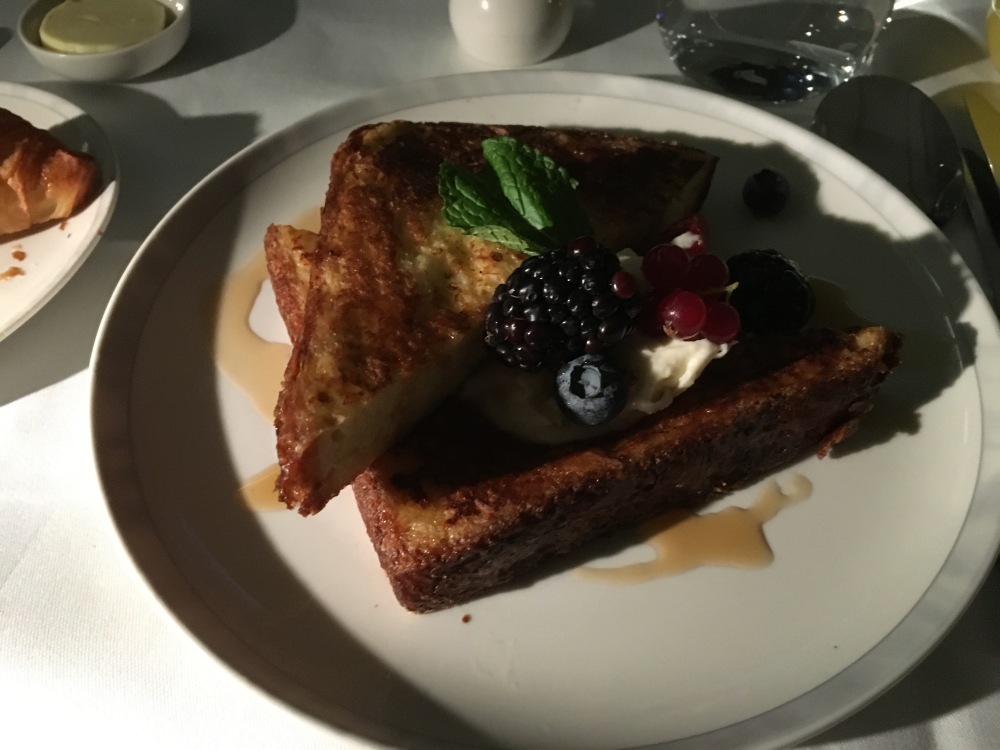 After this, I spoke to the crew for a while, and asked about the changes to the Economy Class amenity kits. It’s been a little while since I flew long haul SQ economy, so I was surprised when the crew came up and gave me a blue amenity kit with dark blue socks. Quite a change from the stylish beige Givenchy kits from the past! Being SQ crew, they were also kind enough to stock a bag full of eyeshades, slippers and teddy bears before we landed.

Well, it was yet another incredible flight in SQ business. I have to say, this route felt incredibly short, despite being 12 hours long. Looking forward to more!