Exciting times are ahead, with SIA scheduled to reveal all new cabins at a media event in Singapore on November 2nd. The new cabins are intended to be delivered on 5 factory-fresh A380’s that will replace the first 5 A380’s the carrier received (these are leased capital). There have been rumours and speculation for months about what will be in store, with much of the discussion surrounding the development of the new Suites on the A380. It’s clear now that they will be relocated to the forward section of the upper deck, and are suspected to feature just 6 Suites in a single-aisle configuration, an astounding use of space given Etihad places 9 Apartments and The Residence in the same area. There is also talk that SQ will make use of the Etihad model and introduce something to compete with The Residence, or perhaps just a two-person super-suite. Whilst the rest of the upper deck will be configured in Business Class, the main deck will be predominantly Economy, with a Premium section.

Economically, this is a much more logical way of laying out the Super Jumbo. Placing the Suites on the main deck was an inefficient use of space, given the width of the cabin. Yes, it made the Suites feel more airy and spacious, however the loss of Economy/ Premium seats was just too great. Having a premium-only upper deck will also be of benefit from the perspective of boarding and passenger handling.

In the lead up to the media event, several things have become apparent.

The new product will first fly to Sydney

The choice of Sydney comes as no surprise, given it was almost 10 years ago to the day that the carrier flew the first ever commercial A380 service on the same sector. Per Singapore Airlines, the new cabins will fly onboard the brand new A380 operating SQ221  (SIN-SYD) and SQ232 (SYD-SIN), commencing on 18 December 2017.

Grabbing a seat on the new Suites seems to be challenging. At the moment, for the weeks following the inaugural, ExpertFlyer shows F0A0 for availabilities on SQ221/SQ232, meaning it is not even possible to purchase a commercial ticket, let alone make a redemption booking or upgrade. This is unsurprising given the number of Suites is expected to almost half to 6, and so capacity controls have been in place. As the product enters more of the fleet, it will become evermore difficult to book Suites with points.

The new regional Business Class has already been ‘revealed’

As per Australian Business Traveller, sources within the airline have confirmed that the Stelia Aerospace ‘Opal’ seat has been selected for use as regional business class on the 787-10 aircraft to be delivered next year. 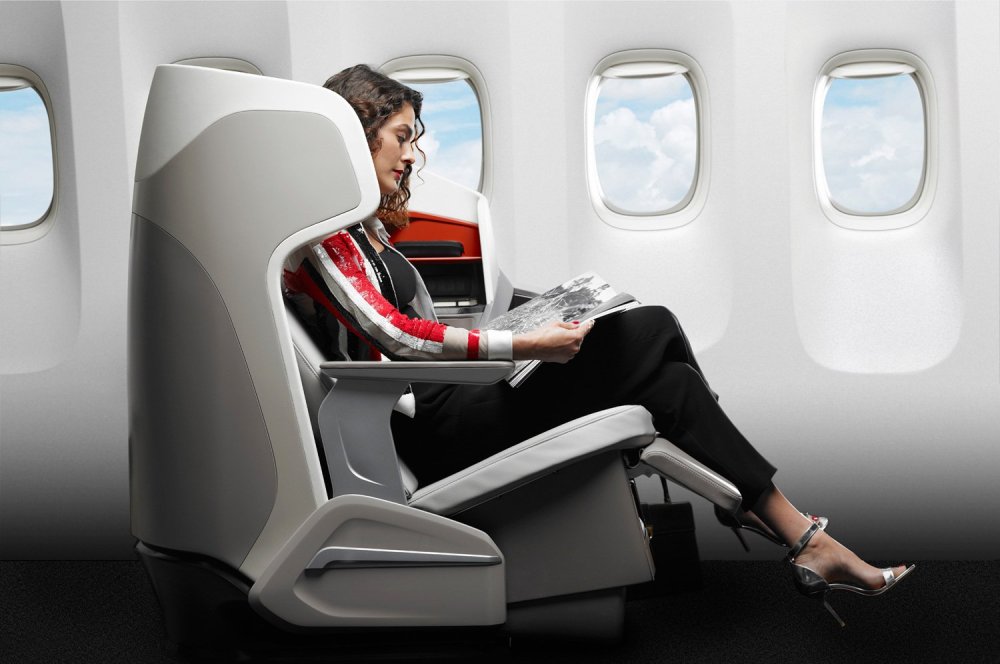 Of course, these pictures display only the shelf-model of the seat, and SIA will certainly customise them in terms of colour palette and other features to match their aircraft and brand. The seats will be laid out in a staggered 1-2-1 configuration, similar to those very commonly used on Emirates, Thai Airways, Etihad, United….etc. etc.

Whilst staggered seating provides direct aisle access for every passenger, it is far from a a true 1-2-1 configuration, as there is a significant compromise over seat width. Emirates’ A380 Business Class seat, for example, is 18.5 inches wide, only half an inch more than their Economy Class (and less than Singapore Airlines’ Economy seat). Nonetheless, these seats will operate on regional/ medium-haul routes and should really not be expected to fly longer than 8 hours. This means passengers will have a fully flat bed with direct aisle access, eventually on all flights, even those 45 minute hops to Kuala Lumpur. This is a nice step up from the current angle-flat 2-2-2 seats found on older 777 and A330 aircraft. Nice as these seats are, the beds are uncomfortable, and 33% of seats lack direct aisle access, a serious no in today’s era.

That’s what we know so far! Standby for the big reveal next week.