When it comes to redemption tickets, one of the biggest hurdles we encounter are the taxes.

Sure you can consider it a “free flight” at first, but once you add on several hundreds (and possibly in the thousands) of dollars worth of taxes, you’re paying a hefty share for the otherwise ‘free’ fare.

Singapore Airlines KrisFlyer is one of the most rewarding systems out there, as it provides very affordable redemptions with pretty decent availability. Qantas, on the other hand, has a very comprehensive Frequent Flyer program, although redemption prices and availability are much poorer.

People redeeming flights with other airlines will accept paying their fare share of taxes and duties, many of which are unavoidable and mandated by law. The “Airport/ Government Surcharges” are generally identical, regardless of the airline you choose (so long as departure and arrival airports are common). They include things like security, ground services, logistics and duty, all of which go into making the airport actually run. So, yes, you are actually paying the security agents, border control officers and even the cleaners, all through these taxes.

What varies more are the “Carrier Surcharges”. These are specific to each airline and even each class, and consistent mainly of a ticketing surcharge, insurance levy and fuel charge. Whilst the first two are understandable the fuel charge is something many carriers either do away with completely or charge just a small amount. Qantas, for example, has NO carrier charges, and just hits you with the Airport/ Government surcharges, a surprisingly generous move.

This is where SIA really gets you. They basically make you pay a whole heap extra for the fuel used to fly you from one point to another. For a flight from Sydney to London and back, they charge as much as $733 per person on top of the regular fare/ redemption cost. The funniest thing is that this cost varies depending on your class of travel. A First/ Business Class passenger pays up to $100 more than an Economy passenger, presumably because of the significant extra weight they contribute. Those Suite doors, fold-down beds, caviar and numerous bottles of Champagne significantly add to the weight of the aircraft, and as such the airline charges you more for it. 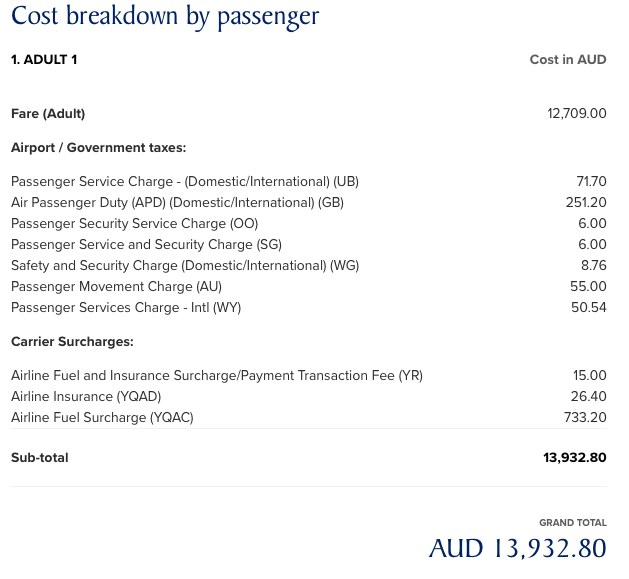 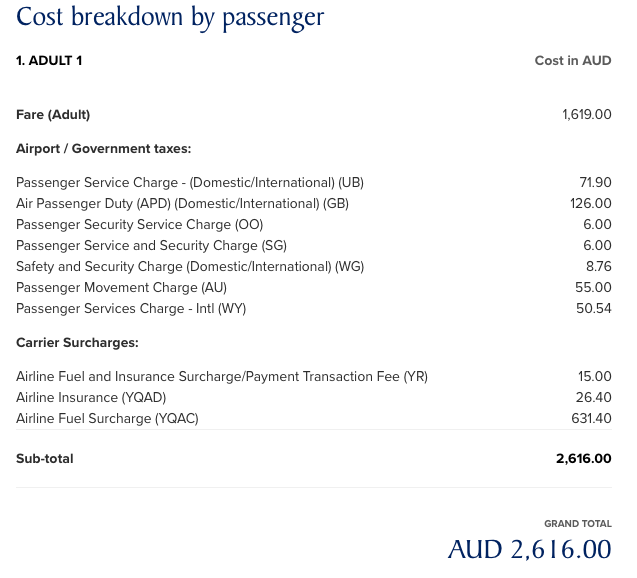 Having said all this, when booking a commercial flight, none of these charges are ever noticed, as they are included in the displayed fare, which is often in-line with the competitors. Furthermore, even when factoring in these taxes for redemption bookings, the value you receive can be up to 7.5CPM, which is far greater than the usual 4-5CPM that other airlines have. By charging a little extra for things like fuel, they’re able to drastically reduce the redemption costs, providing excellent value.