We arrived at Sydney’s Terminal 1 at 7:50 in the morning, and made our way to the Business class check-in counter since we have Silver Status with Qantas. The line took about 10 minutes and we were greeted by an extremely friendly check-in attendant, who quickly checked in our bags and made conversation while we were waiting.

Once we had our boarding passes, we asked if there was any possibility of grabbing some express path passes, which entitle the holder to access to the express security line in Sydney. Unfortunately, because of an audit, where the airport was trying to crack down on the handing out of the passes, she couldn’t give them to us.

After completing our departure cards we walked through immigration, where there were only short lines. We used the new electronic passport control gates, which were quick and simple to use. The system scans your passport and takes a photo which is looked over by an officer. The gate opens automatically once your photo has been verified. Security was a pain, as usual.

Once through security and into the sterile area, we took the short walk to the Qantas business lounge, located past the main duty-free store and up the escalators leading to the lounges. There is a short walk back along this mezzanine level to get to the lounge entry.

The attendant at the lounge checked our boarding passes. She did so quite resentfully and didn’t even say welcome. As we did walk in a few of the staff did say hello and welcome. The lounge is a long strip with a series of different zones. The entry is in the middle of the lounge. To the right, there is a buffet and drinks station, seating, showers, and a quiet zone. A left turn takes you to the work area where desks and computers are set up, a printer and more relaxing chairs, as well as another buffet area and more toilets.

At 8:30 AM the lounge was very busy, and with little seats available, we set up ourselves near the main entry, where there are tables designated for eating, a barista, juice bar, and ice cream stand. We sat at a tall table with stools and helped ourselves to breakfast from one of the buffets.

Periodically, a staff member would walk around offering a plate of food, and today, they were offering both pancakes with maple syrup and a cheese and spinach quiche. 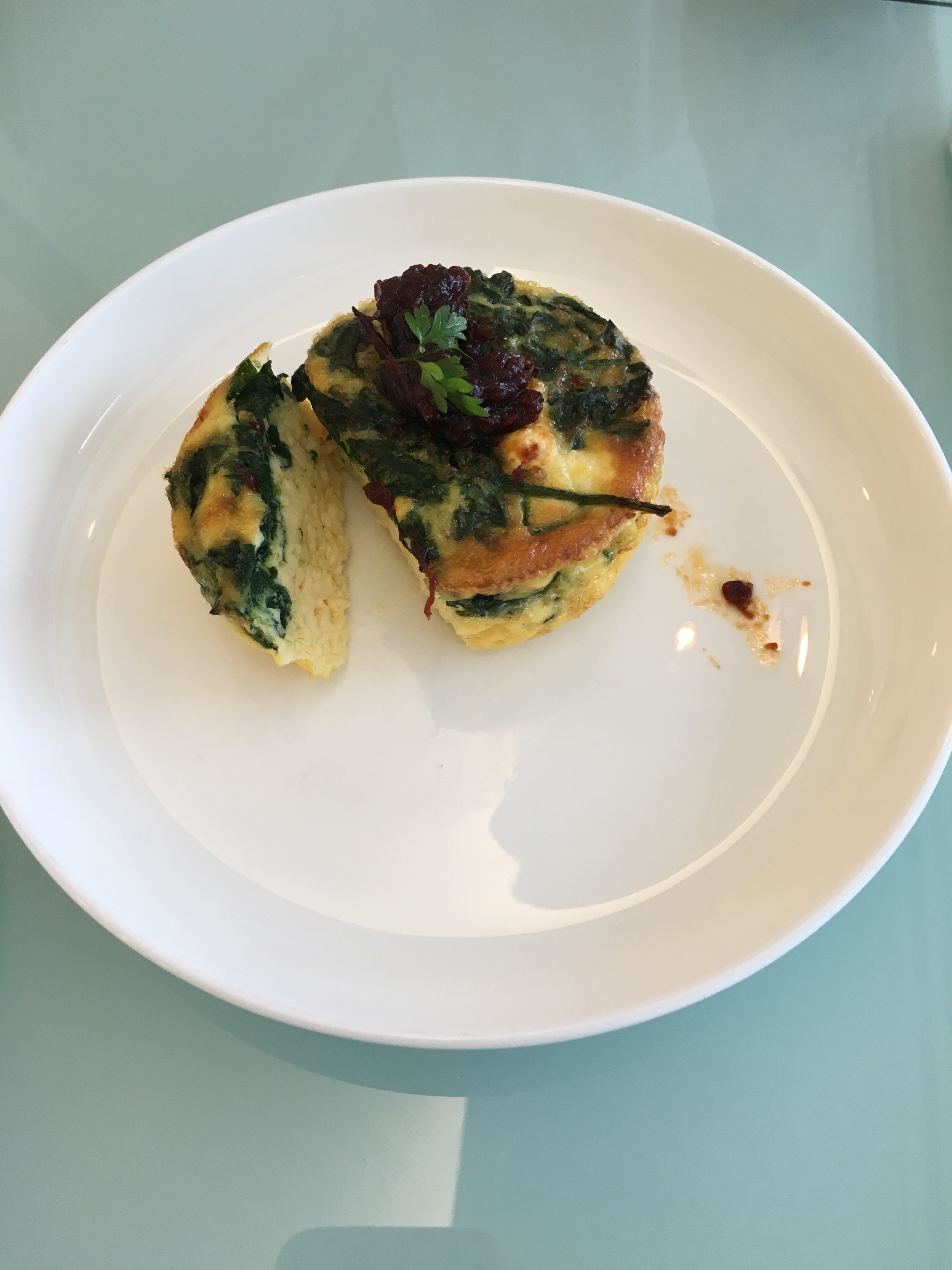 A barista was on hand and was making coffee to order, however, I found the barista quite rude and careless, which was a shame. 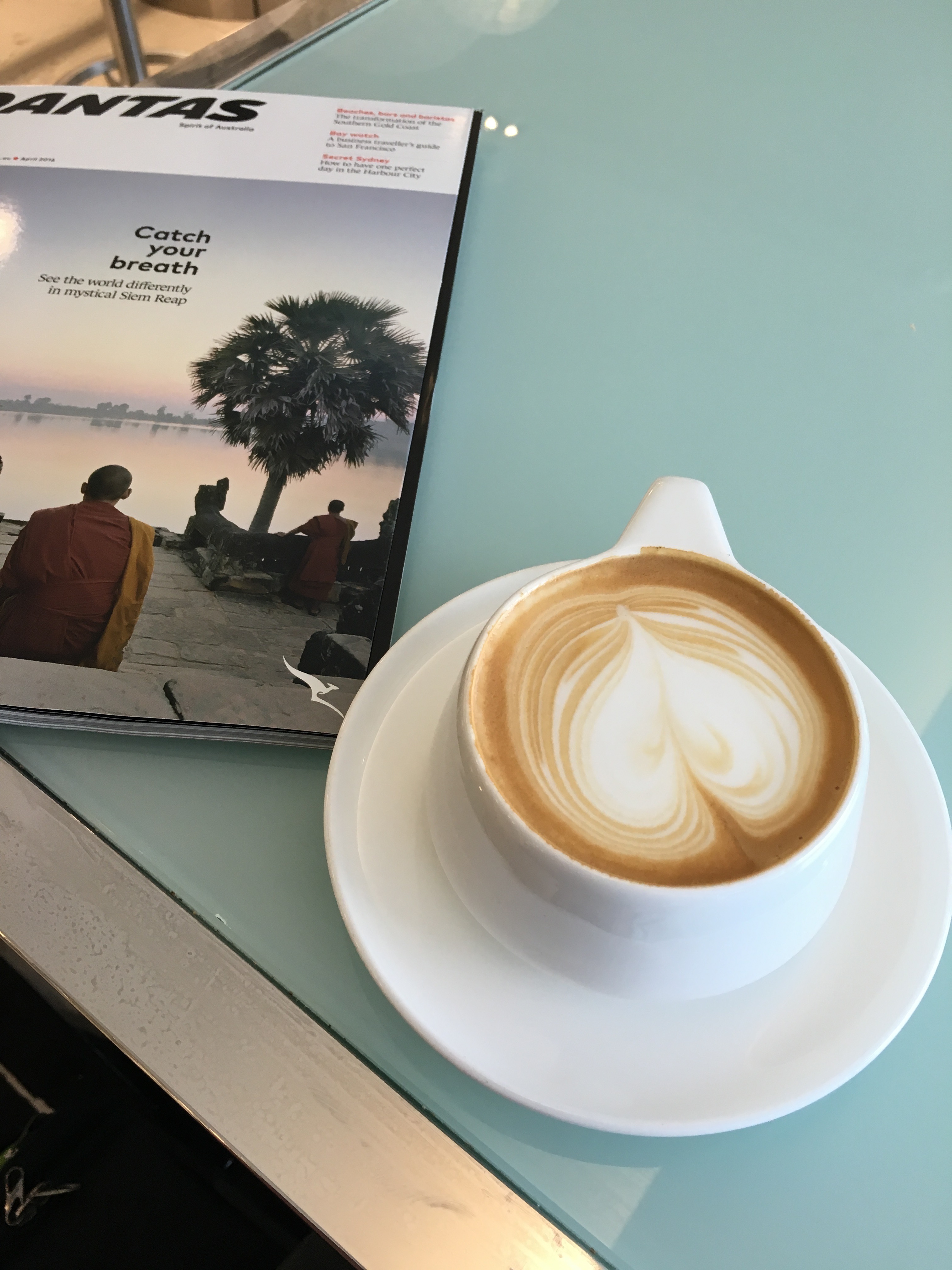 Coffee aside, there was free flowing champagne and other drinks available including beers and wine, soft drinks and two specially mixed cordials. Here is a gallery of images from the lounge.

Overall the lounge is pretty average, its styling is great and so is the food and drinks selection. Staff were mostly friendly but the lounge itself is lacking space, and starting to get a little old. It was busy, but a decent lounge experience. There was no boarding call in the lounge, so we began to make our way to the gate once the screens showed boarding had begun. Our gate was the furthest in walking distance from the lounge and it took a good 10 minutes to get there and even when we did, the line was still running a good way down the corridor. While waiting in line, we noticed the Qantas CEO, Alan Joyce was making his way to our gate! We got to the front of the line and had our boarding passes scanned by an agent and then walked along the aerobridge to the aircraft. The aerobridge was particularly long and had a great view of our beautiful 747!

We were one of the last few to board, but overhead locker space wasn’t an issue since Qantas have retrofitted most of their 747’s with A380 style interiors including larger overhead bins. I took my seat in the 12th row of the 36-row economy section. Our seats were in the 2nd economy cabin, the first being where there are two rows of seats ahead of the forward toilets. The seats are very comfortable, and the legroom was great. Recline is good too, as the seat back not only moves back but the seat cushion also moves forward to give a feeling of even more recline. Our departure was scheduled to be at 10:05AM, however due to the combination of a maintenance and baggage loading issue, our pushback was delayed until 10:30. Our taxi to the runway took a good half hour and we weren’t taking off until 11:02, almost an hour late.

The seatbelt sign was switched off at 11:08 and the crew quickly made their way to the galleys to begin their meal preparations. The first thing that was handed out was a bottle of water to every passenger. At half past, the service started. As it is with all international Qantas flights, the service begins with a signature Bickford’s drink, and today this was a “lemon and elderflower” juice. Crew would walk down the aisle with a jug of the drink and a stack of cups. The idea is that the passenger grabs and holds the cup for the crew to pour into, however, I have seen on multiple occasions crew spill the drink on passengers. It’s a great idea and not using the cart is a much more pleasant experience for passengers (kind of business class like), but maybe pre-poured glasses would be better.

Qantas gives all economy, premium economy, and business passengers the ability to pre-order their meals online, selecting from three onboard options as well as an online special. This service is only available on flights leaving Australia. Because we took advantage of this service, we were served our meals 20 minutes before the crew came around with carts giving a full service. The menu consisted of the items shown below and I chose the Asian chicken and vegetable salad with vermicelli noodles, ginger, chilli and lime dressing on QEat online. It was served with a piece of garlic bread and an apple crumble accompanied by a variety of alcoholic and soft beverages. 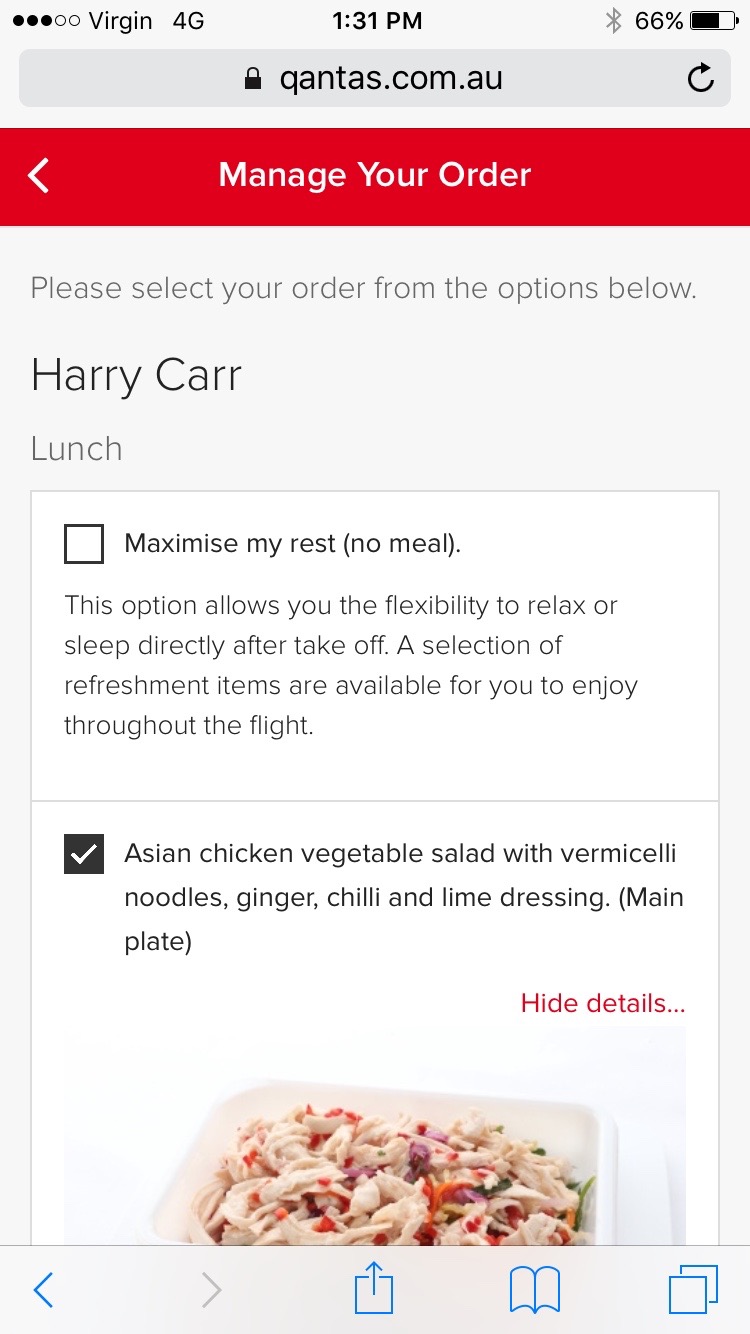 The salad was fresh, cold and delicious, however, I have found the chicken in Qantas salads to often be quite dry, and today that was the case. The bread was warm and the apple crumble was good too. 3 hours into the flight, the crew came around for a hot drinks service, with tea, coffee and hot chocolate available. Qantas hot chocolates are insanely good and far surpass the quality of the tea and coffee that they serve. The hot drinks were accompanied by a Lindt milk  chocolate ball.

After the rubbish was cleared, the lights were then turned off to allow passengers to sleep. I continued to use the in-flight entertainment system enjoying the recent Star Wars film as well as some TV shows. The entertainment selection is plentiful although, the system is beginning to show its age, and has recently been surpassed by the Panasonic system installed on the new Qantas A330s. I brought my own headphones to use instead of the supplied headsets. Qantas also supply a blanket and pillow for each customer on the flight.

At 12 past three, the seatbelt sign was switched on as we flew through some minor turbulence, however, not long after it was switched back off again. It certainly wasn’t the worst turbulence I’ve experienced.

The crew came around offering water, in the same way I spoke about above. An hour later they handed out Weis bar ice-creams. 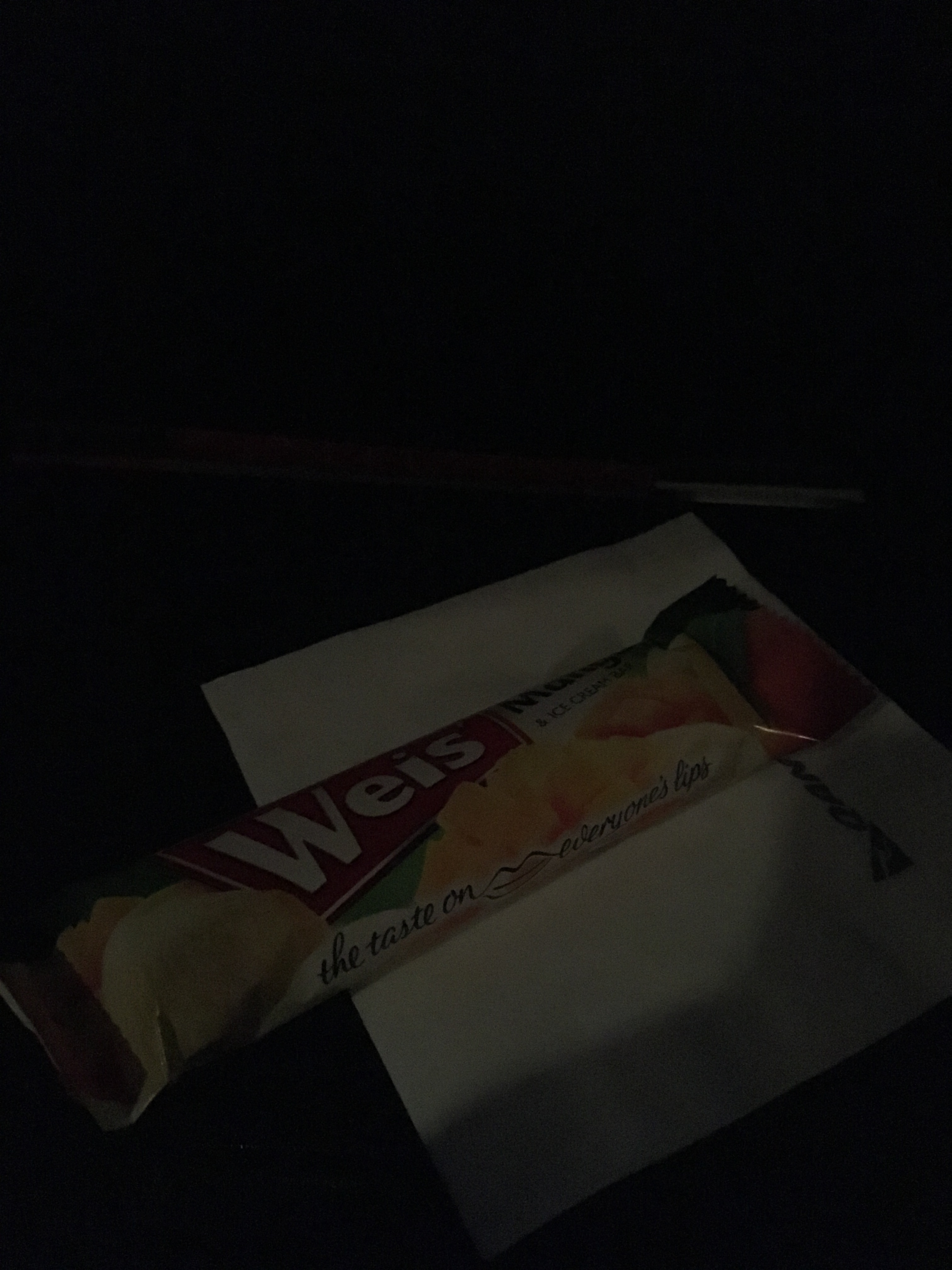 About two hours prior to landing, the lights were switched on and a final snack was served a toasted chicken panini before the cabin prepared for decent, the sandwich was warm but quite small, but was good enough for a “snack”.

Crew took their seats 7 minutes before landing but I was surprised to see none of the crew walked down our aisle to check seatbelts were fastened and other safety matters, rather, the crew member at our exit seemed to walk from the premium cabin and take his seat. Interesting, when Qantas has an excellent safety record to see something like this.

We landed at 7:19 and were at the gate by half past. As usual the unloading of such a huge plane took quite a while and we did have quite a wait before we made our way off the flight.

Overall, the flight was the usual Qantas standard, the service was friendly, the food was great and the seats were comfortable. There was nothing notable to mention. Apart from the drink serving issue that I mentioned, it was an excellent flight.  Again and again I am impressed with the Qantas service.