An extraordinarily empty flight and yet another wonderful experience with Etihad! Once again, the crew made an Economy flight seem like Business.

At the conclusion of an incredible stay in Abu Dhabi, it was time to head back to Australia. Etihad’s Economy check-in in Abu Dhabi is surprisingly nice! Incredibly modern and stylish. We were departing in the evening of the 24th, however, very early that morning, a thick fog forced AUH to close for almost an hour. This delayed, diverted and cancelled flights in and out of Abu Dhabi. As a result, the airport was very empty this evening! So many passengers had missed connections or had flights that were cancelled. As we approached the check-in line, there were about 3 non-uniformed staff (Etihad brought in a large number of extra staff to help with the delays), who all checked their iPads to confirm our flight was operating as scheduled. As we checked in, I asked the agent about Etihad’s instant upgrade system. For this flight, the upgrade from Economy to Business was set at US$1300. Much higher than I expected, so I decided to stay with our group in Economy! Anyway, following check-in, while we were waiting for the others to complete check-in, I spoke to one of the other agents about an exit row seat. She very happily moved me to the forward row, and was incredibly courteous.

The airport seemed so deserted. We very quickly passed through immigration and security formalities, and were soon in the departure hall. It is ridiculous how SMALL Terminal 3 is! There are a few duty free shops and restaurants, but it is actually a very, very small area. One of the wonderful things about the airport was the “CNN Traveller” café. It is the first one in the world, and caters to business travellers. The place is designed well with swivel and fold down chairs, providing the option to stand or sit. There are universal power points and USBs at every table, and most tables have a parabolic overhead speaker that plays the audio from CNN, which is displayed on incredibly large, high-definition screens around the restaurant. They offer a wide range of good quality food and drink as well. When we were at the café it wasn’t officially opened, and only properly opened on the 8th December.

As we proceeded through into the gate area, and past another bag-check, it was clear that this flight was to be incredibly empty. Boarding commenced, and all passengers were onboard very quickly. As I was seated in the exit row, I was speaking to one of the crew (who manned door 4R), and she said that because of the fog and missed connections, the flight was incredibly empty with just 120 passengers onboard a 777-300ER which accommodates up to 330! That’s a 36% occupancy of the whole aircraft! The captain then announced that we had been given a later departure slot, due to the fog issues, and we sat on the tarmac for over an hour.

Once we were airborne, the seat-belt signs were switched off very quickly, and the crew began preparing dinner. Because of the timings on this flight, the two meals were BOTH dinner!

I chose the meatball dish, one of 3 options, which was very average. No where near as excellent as the outbound flight. I soon went and spoke to Hersham, one of the stewards. I found that it was only his 5th operational flight! He was very new as crew, and it did show a bit, because he displayed a bit of shyness. Nonetheless, he was incredible! He was far more courteous and helpful than many other more experienced crew I have met. As it was an empty flight, he said he would walk around the cabin to try and find me a row of free seat to sleep! After returning to my seat, he came back and said that unfortunately nothing was available, but I really appreciated his efforts!

The cabin lights were soon dimmed to a lovely blue, and then switched off to allow passengers to sleep.

Blue lighting. The cabin also changed to many other colours during the flight.

Position soon after dinner service
I decided to get some rest, and also watch some TV. Etihad offers Live TV for a few news channels. I caught up on the news inflight, and followed the breaking news of Chuck Hagel’s resignation from 40,000ft! 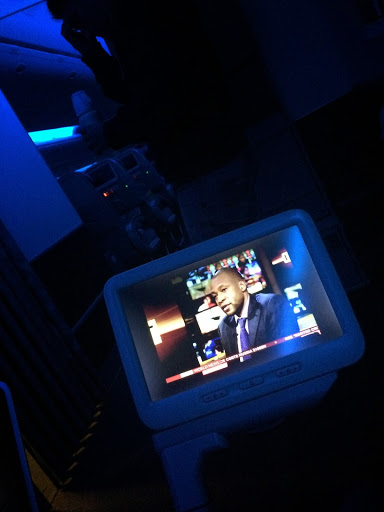 I usually take photos with my DSLR, however, I didn’t bring it onboard for this flight. I find it more useful in Business and First Class, so just rely on my iPhone for photos here.
So after a few hours rest, the sun had risen and I went back to the rear galley to speak to the cabin crew. Two stewardesses and one leading stewardess (Lynn) were in the galley. I was travelling to Abu Dhabi for a special Formula 1 competition that I was involved in, and Lynn and the other crew were very interested to hear about it and see pictures. It’s always great when crew take an in interest in passengers’ travels. i also spoke to her about being cabin crew for EY. She said that when applying, you really need to sell yourself. Take professional photos of yourself in a suit, and present yourself well at the interviews. I hope to be cabin crew for a couple of years, and she said that she may be my interviewer in a few years! We talked for a while, and then she gladly made me hot chocolate and biscuits so I could rest. Excellent crew!

It was soon time to prepare for arrival. After a quick dinner, window blinds were raised, lights switched on, and passengers began getting up. I really felt sad to leave these crew and never see them again! They were so wonderful, and really show how amazing Etihad is.

Here are a few photos from the evening approach into Sydney: 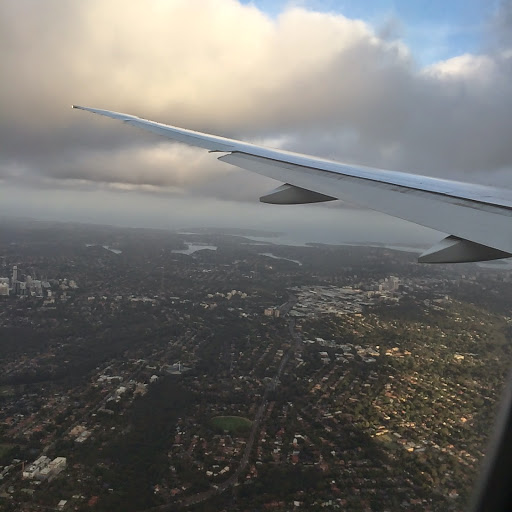 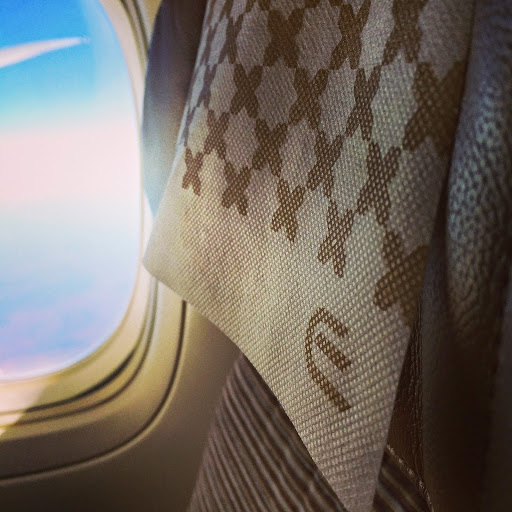 After landing, I went to the rear galley to say a proper thank you and goodbye to Lynn. I also made sure to tell her and the cabin manager how excellent Hersham was on such a junior flight. I know comments from passengers go a long way, so I hope that my compliments benefited Hersham well. Lynn gave me a little card to provide comments to the airline, and said goodbye, and “hope to see you soon”.

Etihad provided yet another incredibly experience. Like I said earlier and in my last report, the crew made an Economy flight seem like Business. I would certainly recommend the airline for any future flights. They are new, modern, stylish, sleek and simply wonderful. Thank you, Etihad!

FOR MORE INFORMATION ON ETIHAD, AND A REVIEW ON THE 777’S GALLEY/SOCIAL AREA, PLEASE VIEW THE REPORT FOR THE OUTBOUND FLIGHT (CLICK HERE).

Here are the final ratings:

Stay tuned for my next report.