July 21st, 2016: The day I was eagerly looking forward to had arrived. Today would be my first inaugural flight experience, to Düsseldorf, Germany (DUS). This new destination was a milestone for Singapore Airlines, its first since March 28th, 2011 when it launched thrice weekly flights to São Paulo, Brazil (GRU) via Barcelona, Spain (BCN), which will be suspended from October 20th, 2016, following a recent operational review.

0744hrs: roughly 15 hours prior to departure, my phone beeped, signalling an email delivery. Warm bubbles fizzed inside me as I read the simple but sincere memo from Singapore Airlines’ Senior Vice President, Cabin Crew. What a wonderful morning this was turning out to be…. Wow!

“Good morning BK, I will be at the gate hold event for the above (“DUS Inaugural Flight”) and hope to catch you there. You should be looking forward to the flight and DUS. It’s a quaint city and offers good beer if you are up to it. Best Regards.”

Excitement built. Without doubt, this was going to be a special flight, one that as with all other inaugural parties, would kick-off to a pre-flight celebration, prior to SQ338’s acceleration down the runway, getting airborne.
Time passed slowly. Since re-joining the aviation scene, this was to be my first big vacation, away from the Singapore desk. Along with the carrier’s new destination launch, I took the opportunity and booked myself with Insight Vacations’ 10 day Germany Spectacular.
SQ338, scheduled to depart at 2335hrs, would be operated by 9V-SMA, for her DUS inaugural. This was the carrier’s first Airbus A350-900, a four month old aircraft, and the “big Sister” of what is to be a fleet of 67 such airframes for the airline.
The avid aviation fan arrived at Singapore Changi Airport at 2000hrs, slightly under 4 hours prior to departure. All proceeded as usual – luggages were tagged, boarding pass issued. The bonus invitation to the pre-flight party was then presented. Gate B8, assigned for SQ338, was to open at 2130hrs, for the fun flare, some 2 hours prior to going wheels-up. 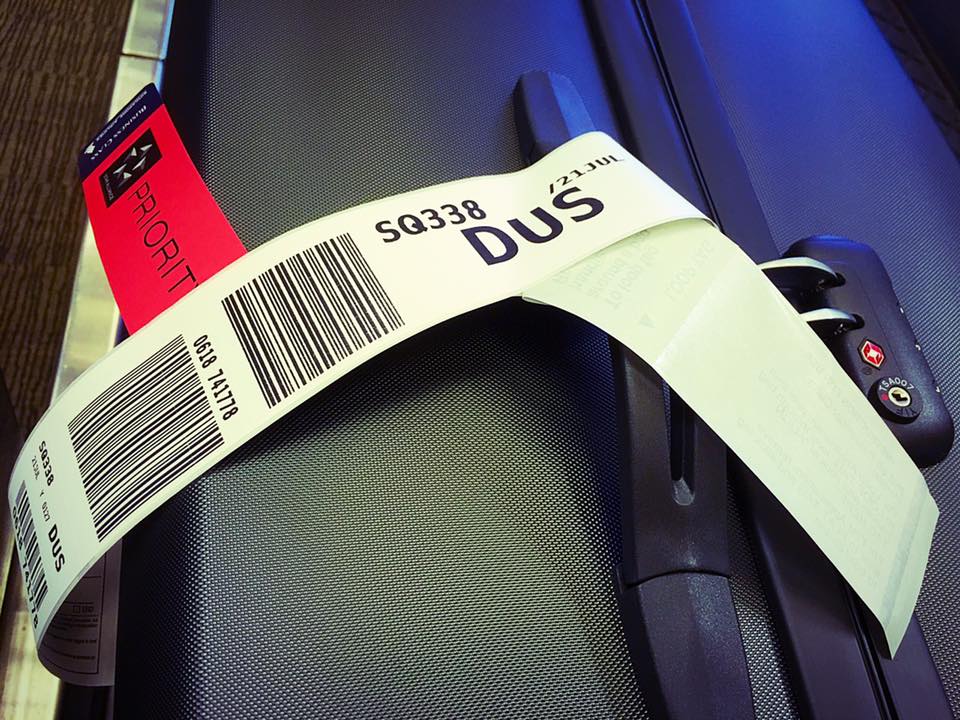 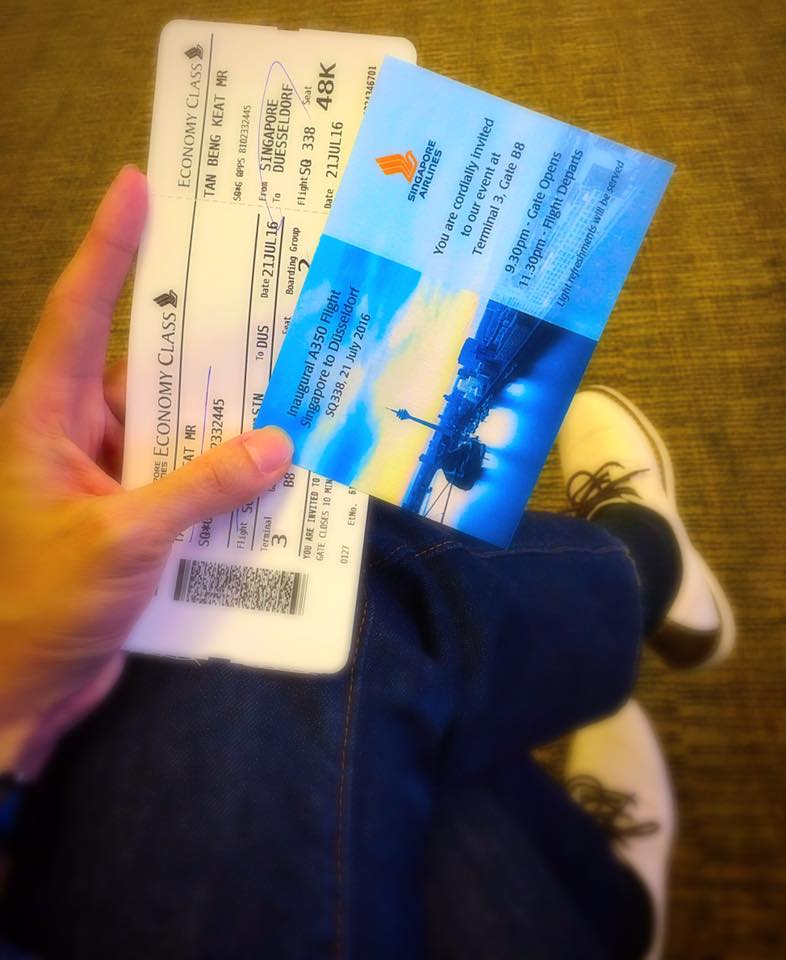 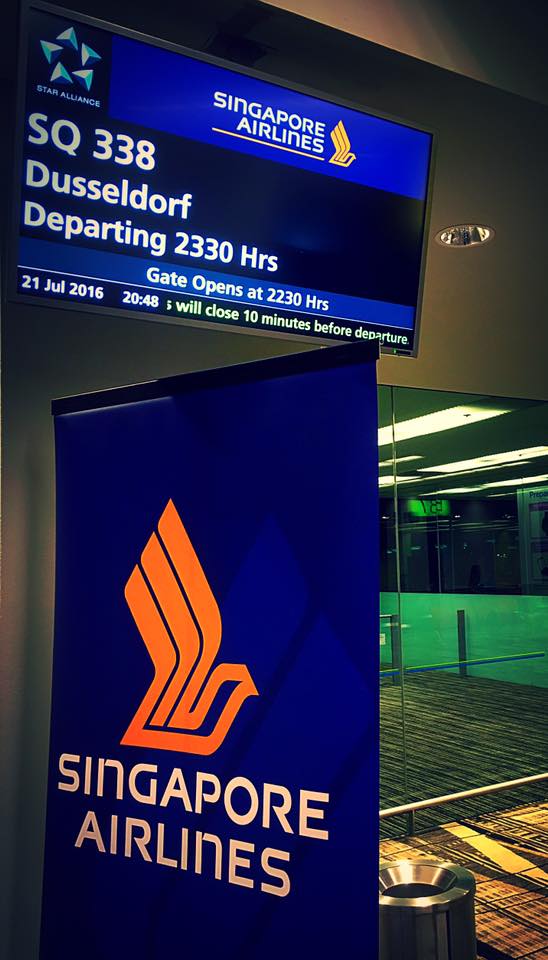 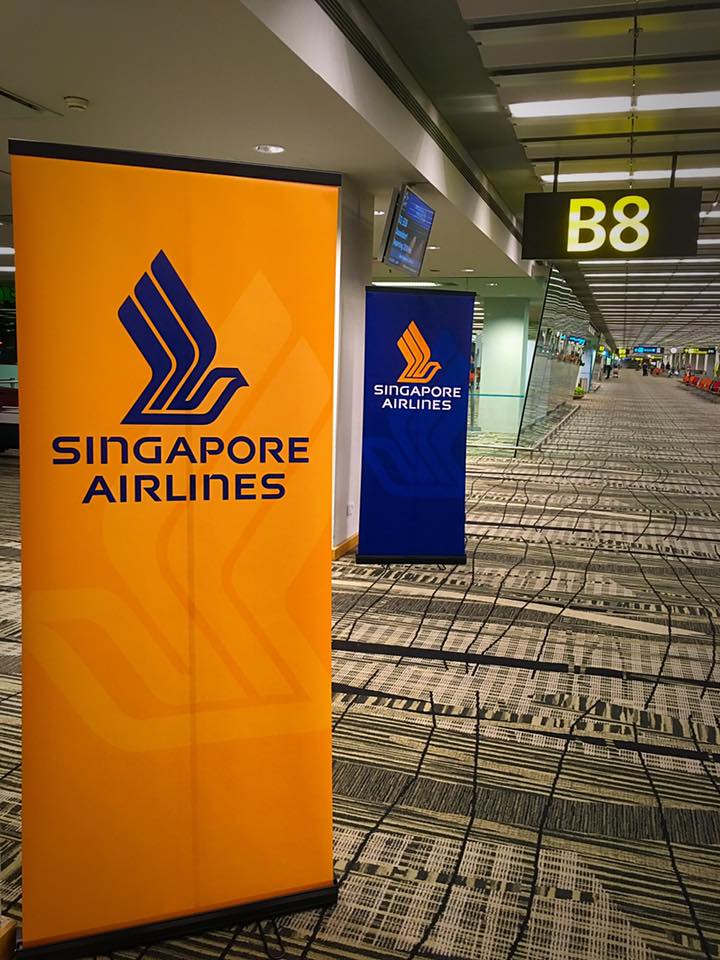 Thanks to Chefs from Singapore Airport Terminal Services’ Catering arm, the party at Gate B8 had a culinary flare of both local and German delights. 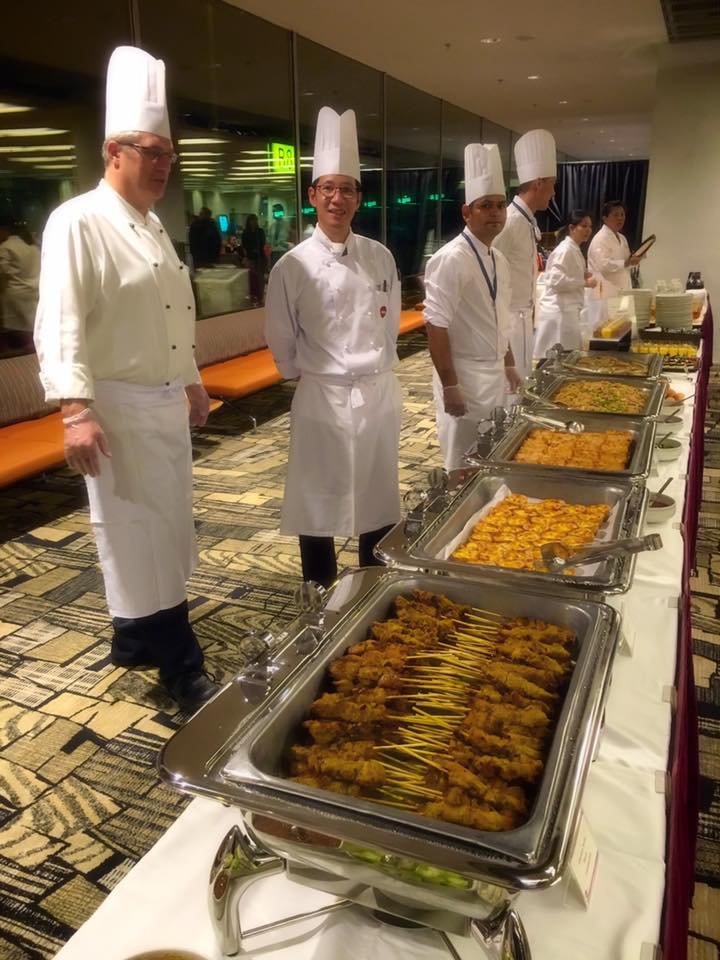 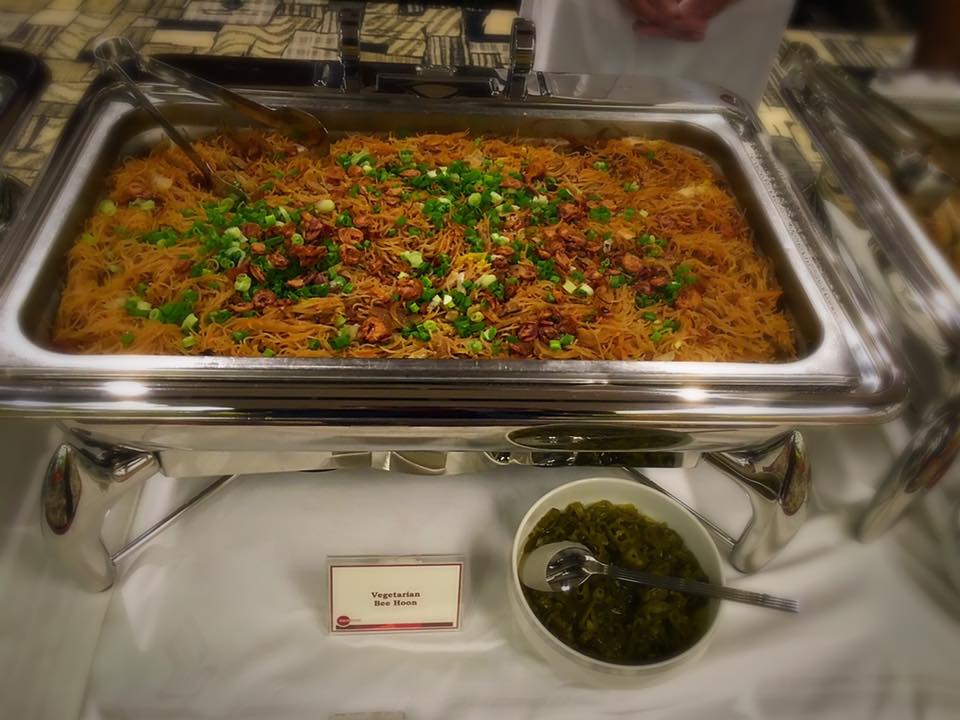 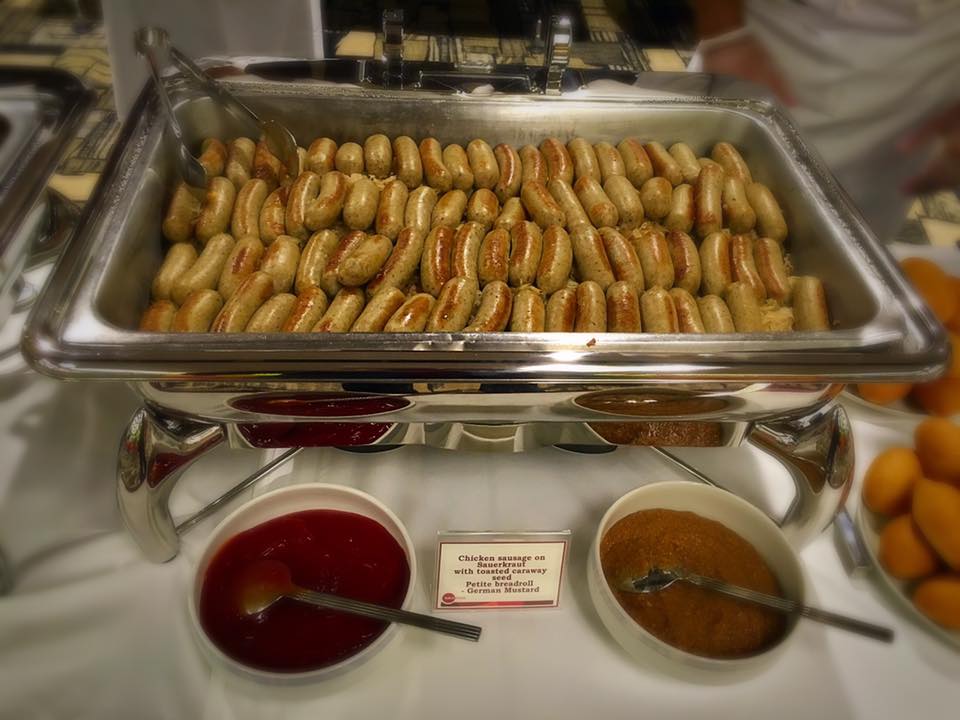 Champagne – Ernest Rapeneau, was available for all to enjoy, free flow. 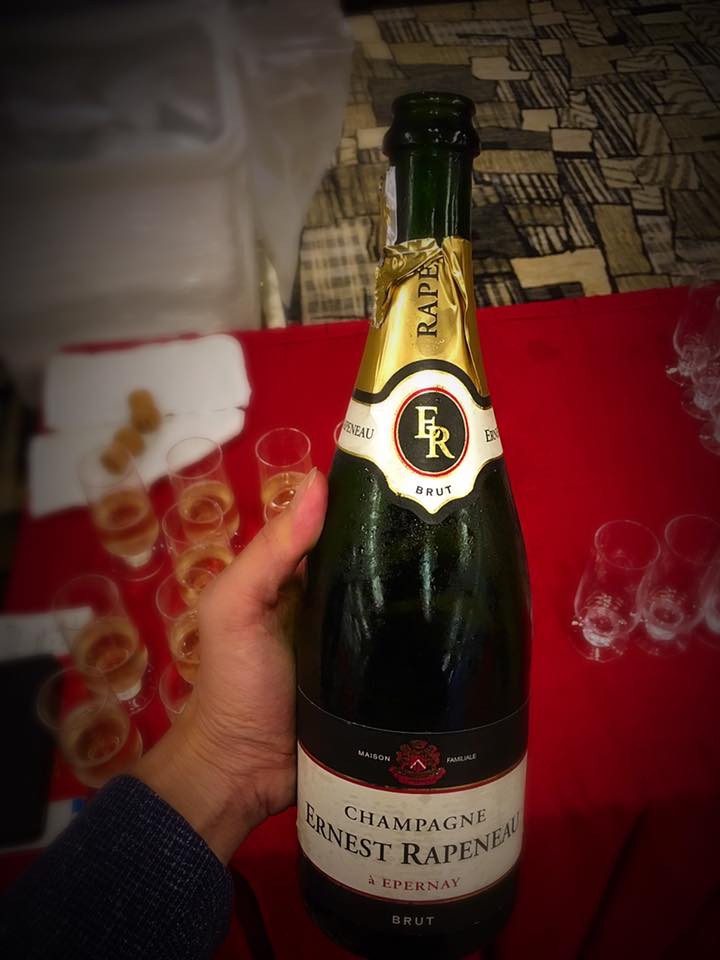 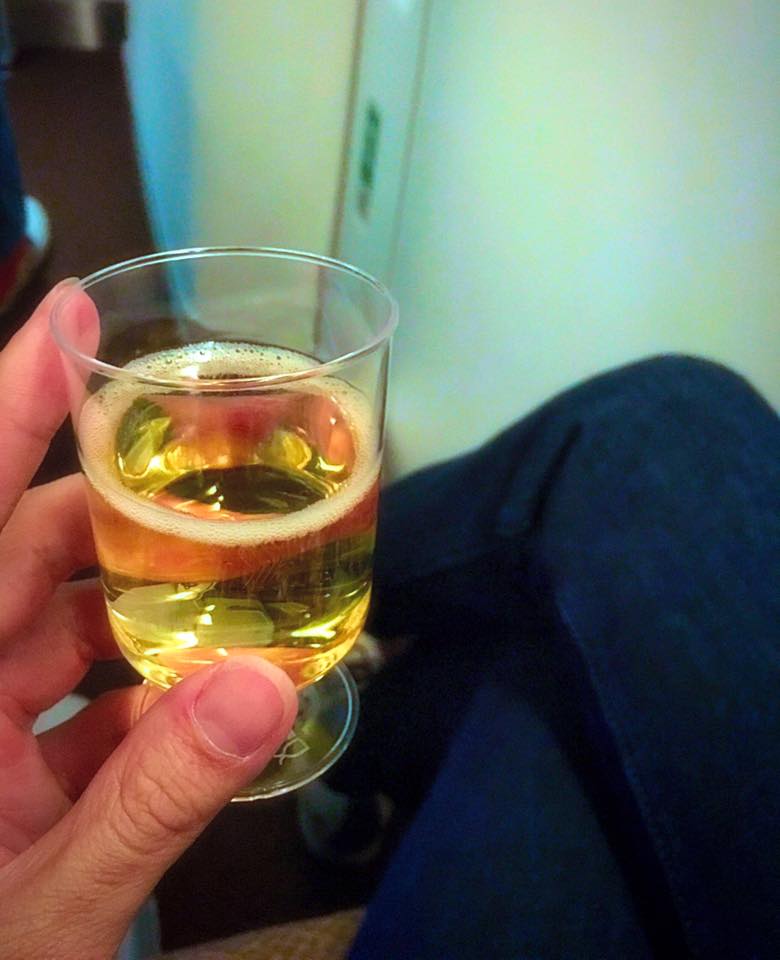 Polaroid photos, could be taken against a backdrop of the Düsseldorf skyline, with Singapore Girls in their award winning Pierre Balmain Sarong Kebaya. Senior Vice Presidents – Marketing (Wen Fen Lee) and Cabin Crew (Pee Teck Tan) graced the event. The emcee, a current flight crew with the airline and proficient in German added much zest and energy to the party. Prizes were gifted to those whom were able to respond to quiz questions on DUS; and of the carrier’s brand new sparkling Airbus A350-900 aircraft.  Journalists from SilverKris were also present, and whilst SQ338 was cruising at 40,000 feet, towards DUS, had published an online feature of the inaugural. 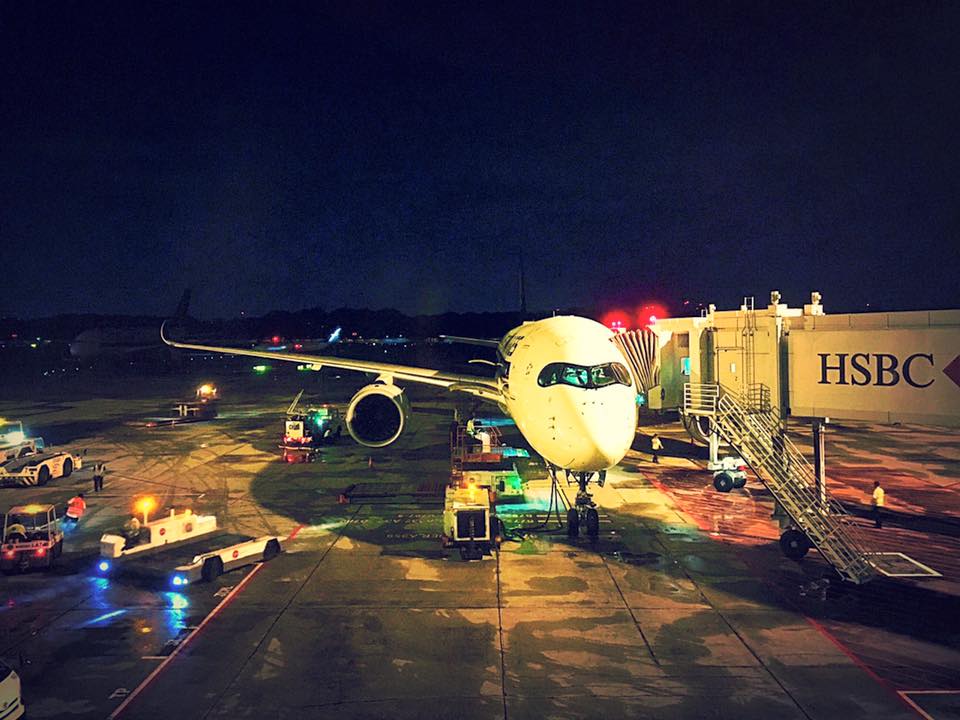 2245hrs: Boarding commenced for Singapore Airlines’ inaugural to DUS. Passengers were presented with memorabilia to celebrate the airline’s first flight to a new destination. These keepsake mementos included a certificate initialed by the flight commander: Quay Chew Eng; a matchbox sized carved skyline of Düsseldorf, Germany; and a luggage strap with a handheld weighing device. These were all thoughtfully contained in a beautifully designed Pierre Balmain Sarong Kebaya bag. 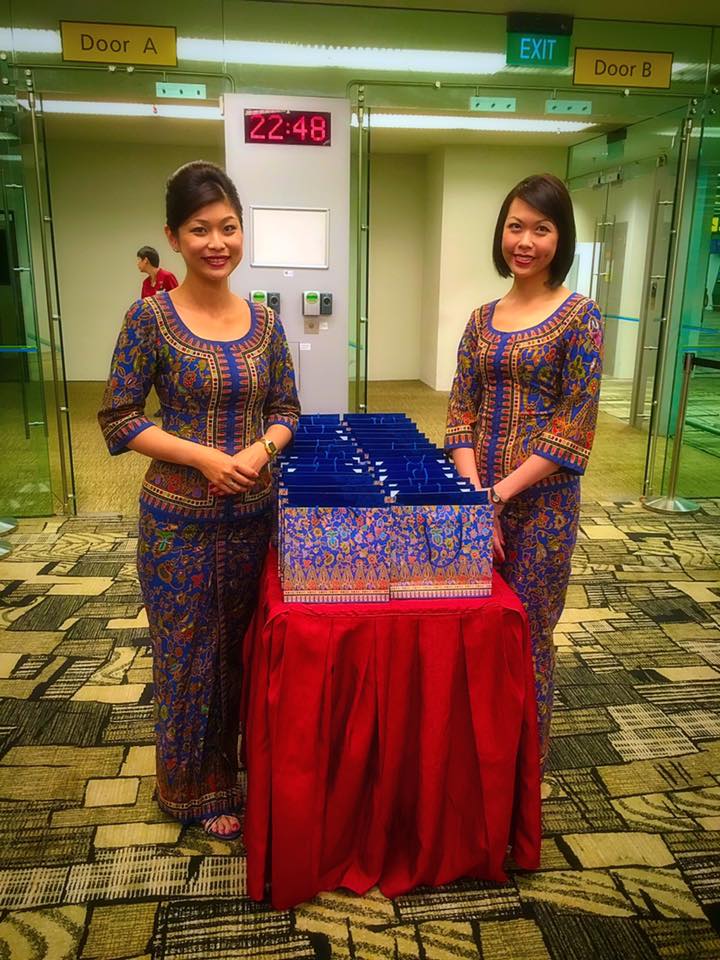 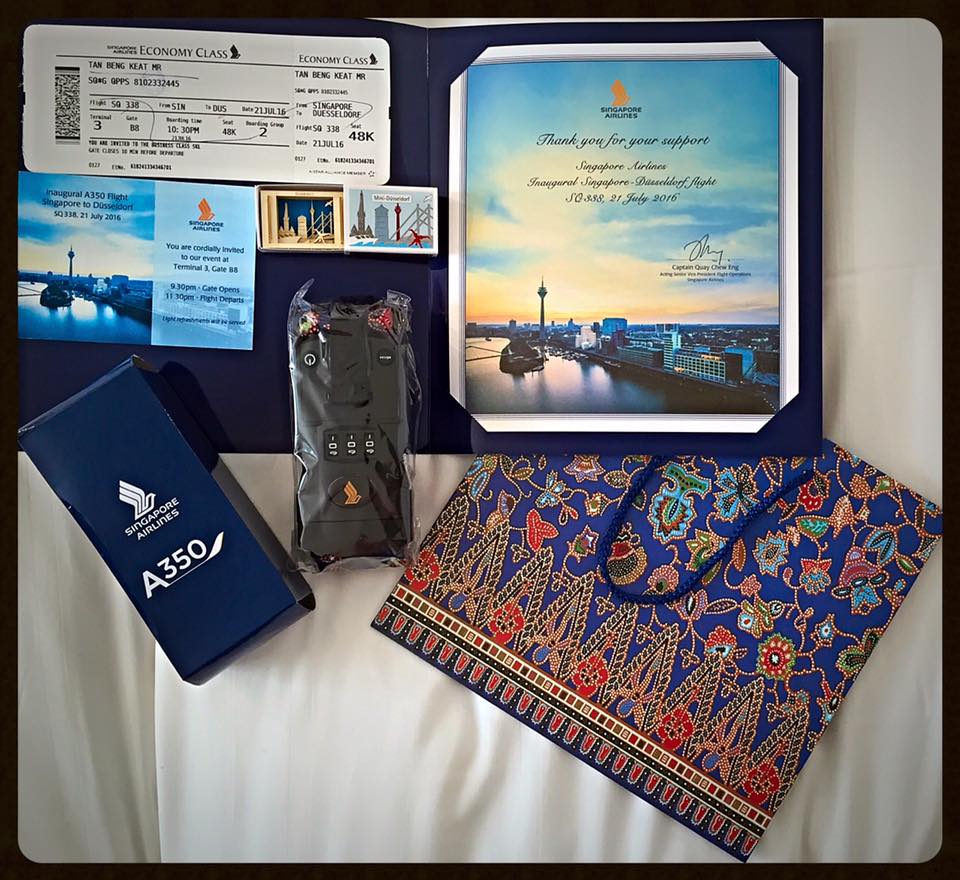 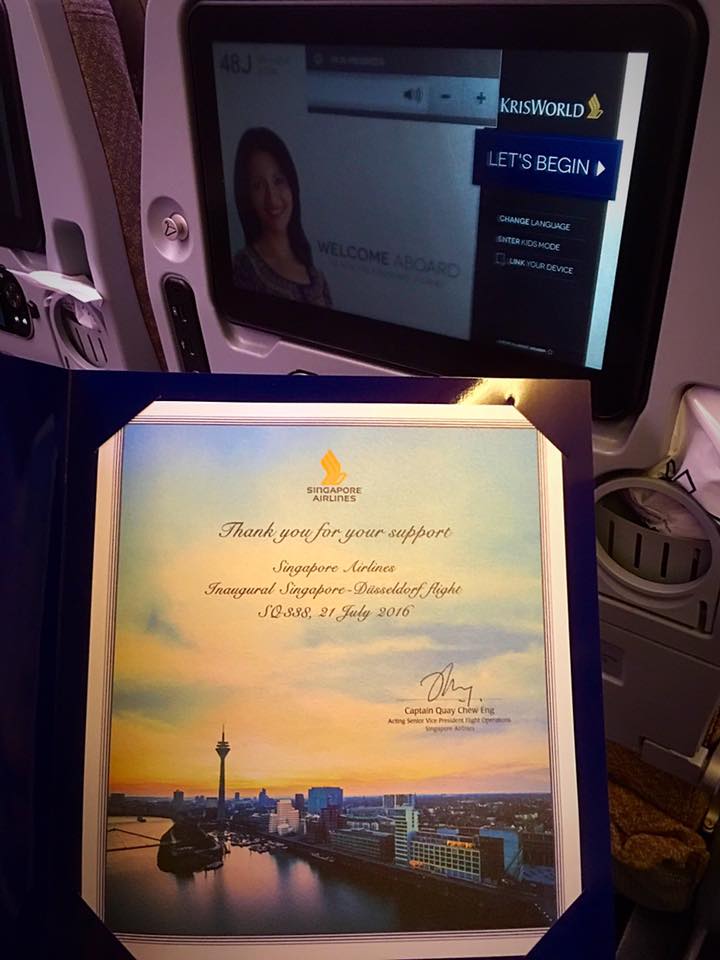 Upon entering the aircraft, I walked up to my pre-purchased Preferred Seat at 48K of the Economy Class cabin. The crew beaming with smiles, were busily attending to passengers who were streaming into the cabin, which for the Economy Class seats were decorated with specially designed head rest covers. 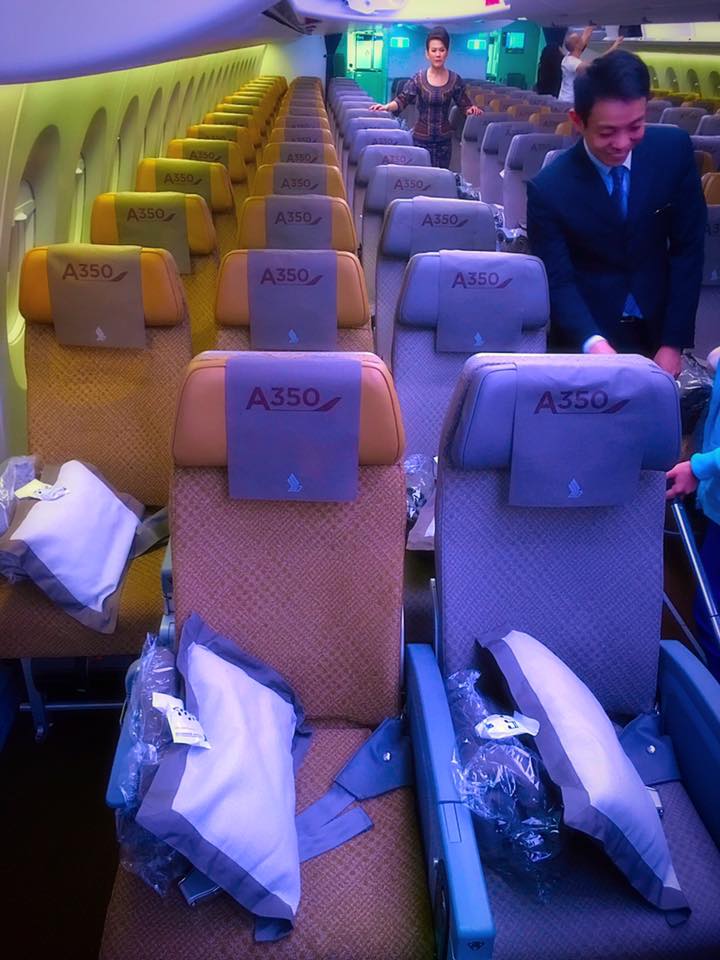 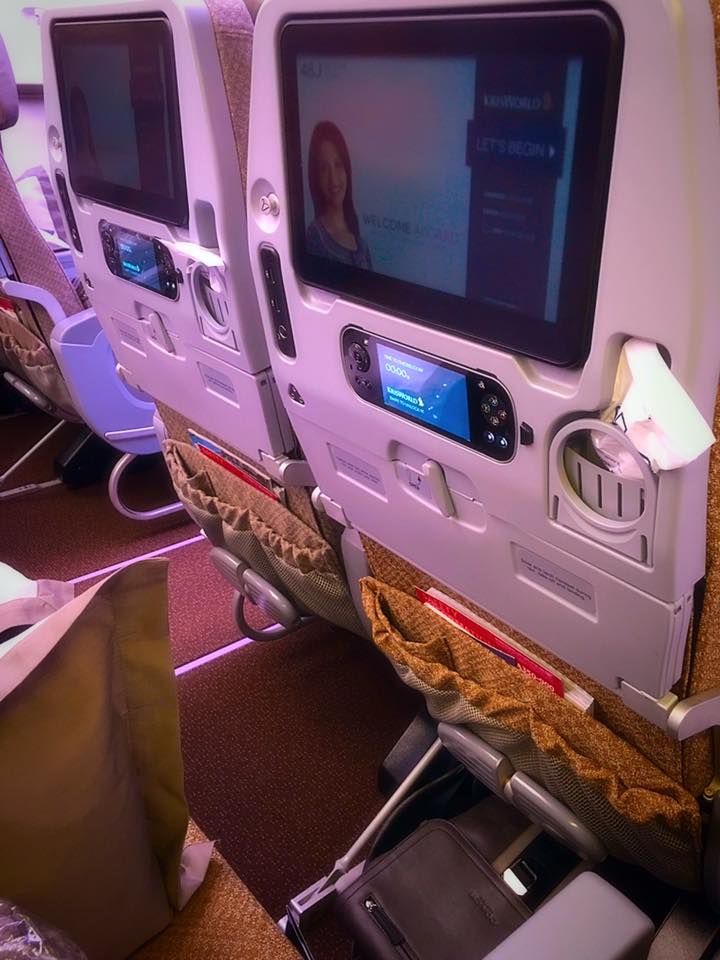 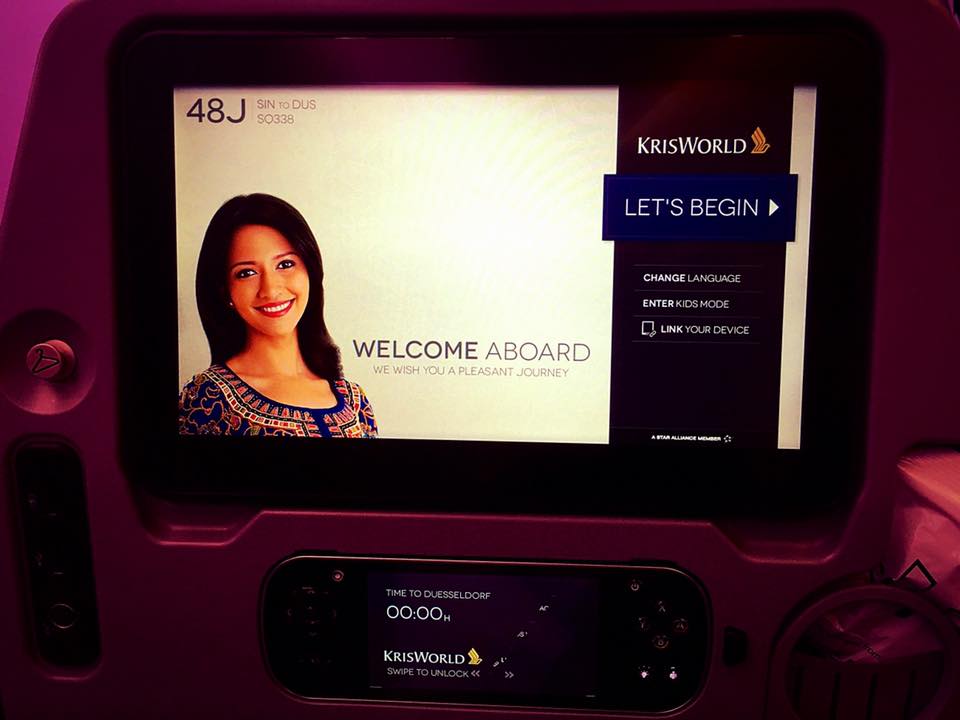 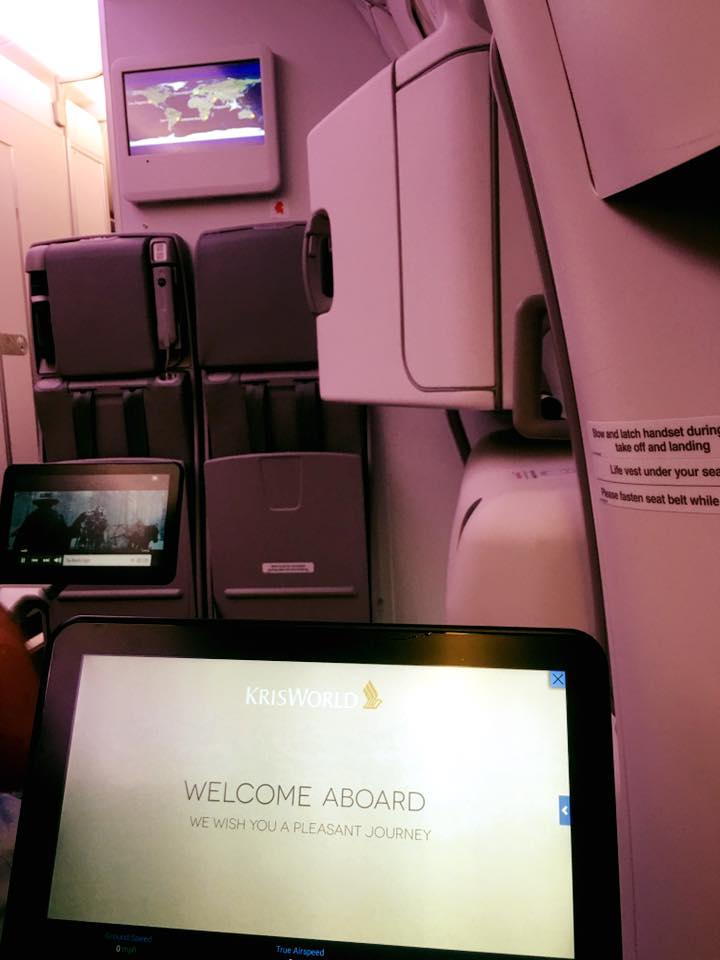 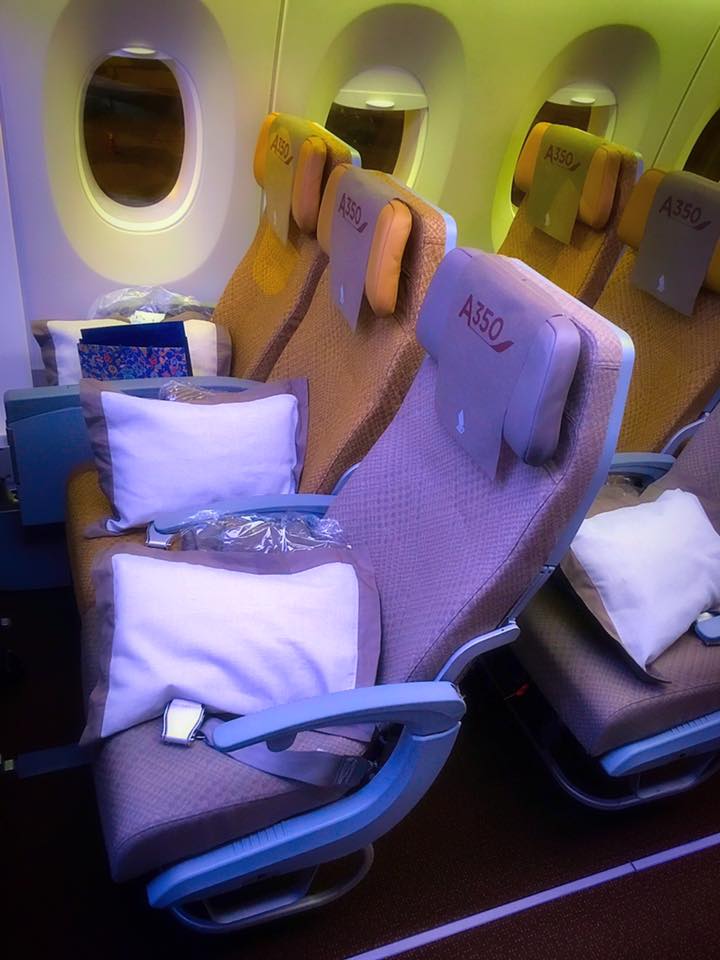 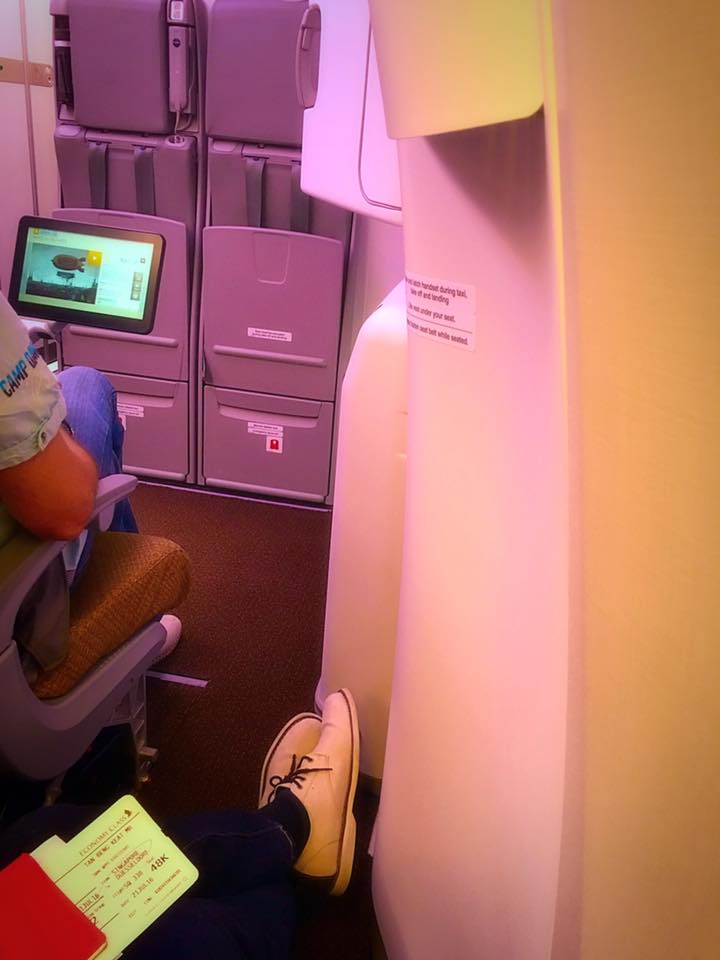 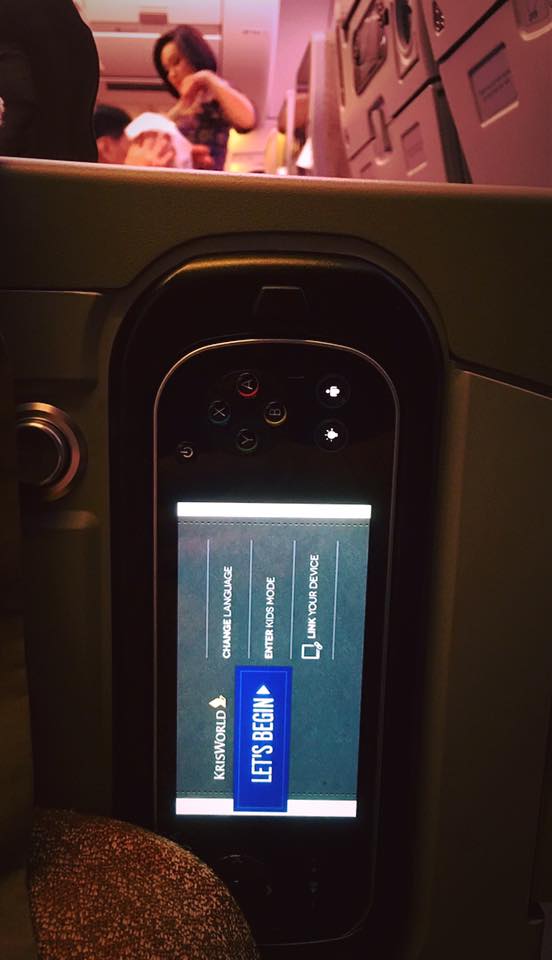 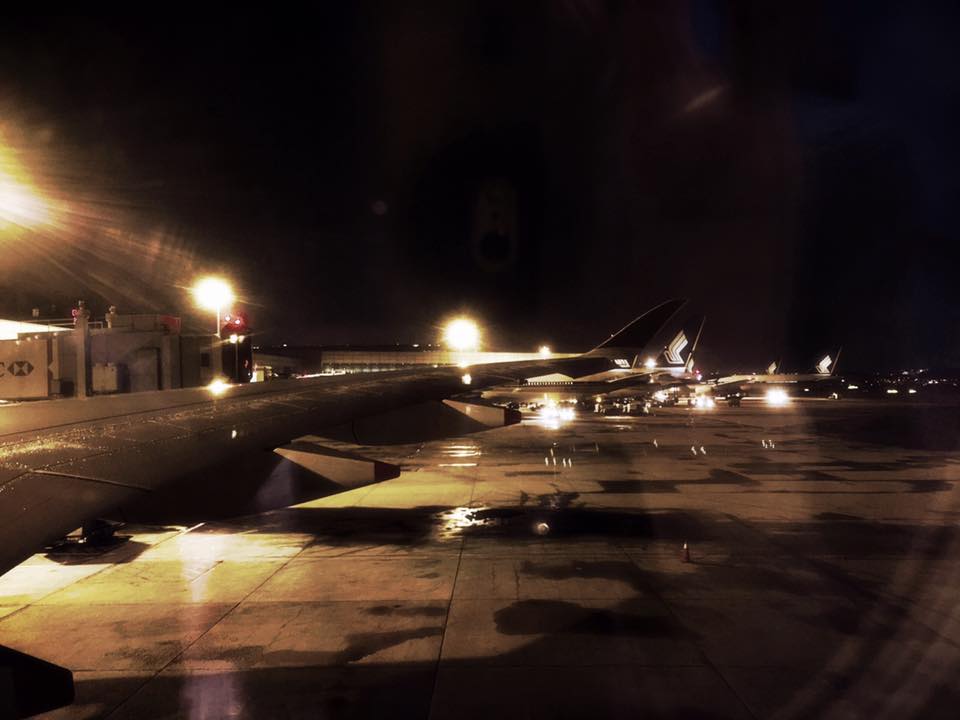 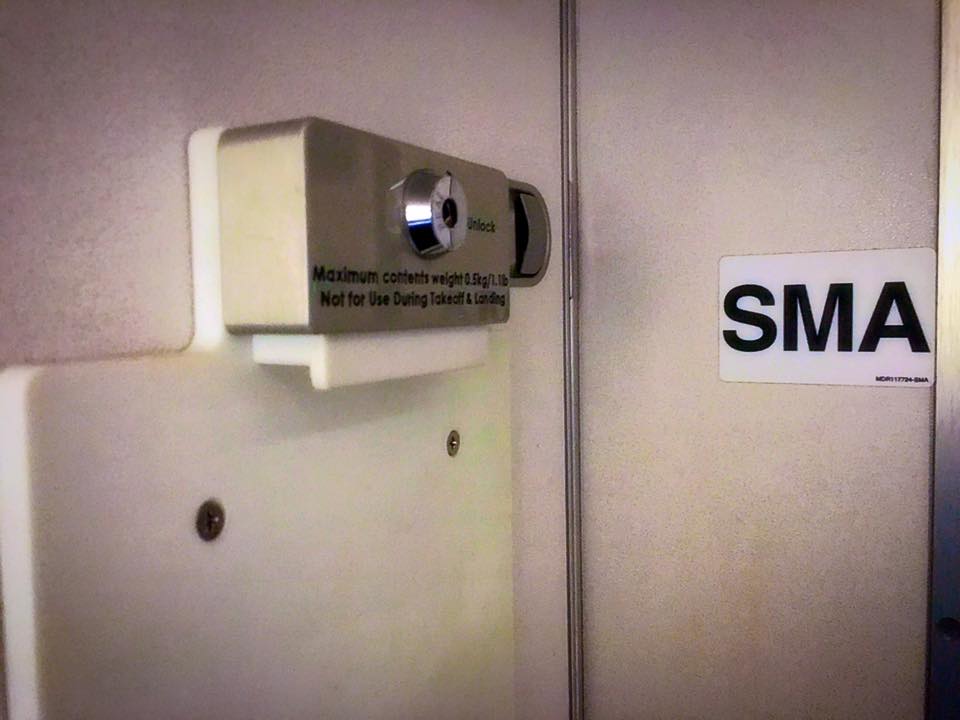 * Captain announcement *
“Ladies and Gentlemen, Captain Quay Chew Eng from the flight deck, wishing all a warm welcome aboard this Airbus A350-900 inaugural flight, to Düsseldorf, Germany on SQ 338.
Joining me in the flight deck today is Captain Magrumalvan and First Officer Melvin Goh. Your Inflight Supervisor is Mr. Chan Chin Leong,  who, together with his team will ensure that you are well looked after.
Our flight today will be 12 hours and 10 minutes. We are expecting some light to moderate turbulence enroute, so please observe the seat belt signs and buckle up for your own safety when not moving about the aircraft.
For those of you who wish to follow our flight progress, this is available on Krisworld.
I will now leave you in the hands of my capable team as we make final preparations for departure, and will update you with the latest weather and arrival information prior to our descend into Düsseldorf. Once again, thank you for choosing to fly with Singapore Airlines.” 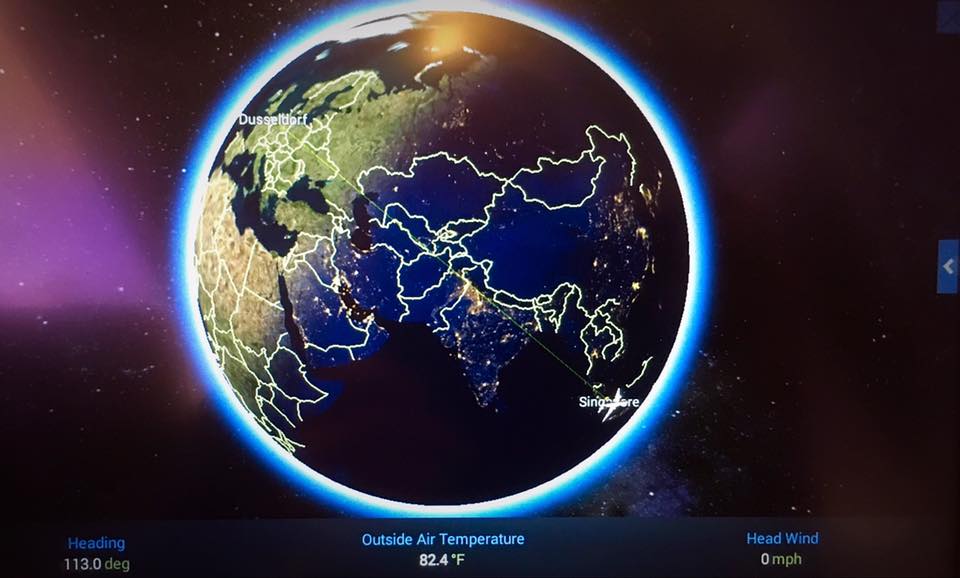 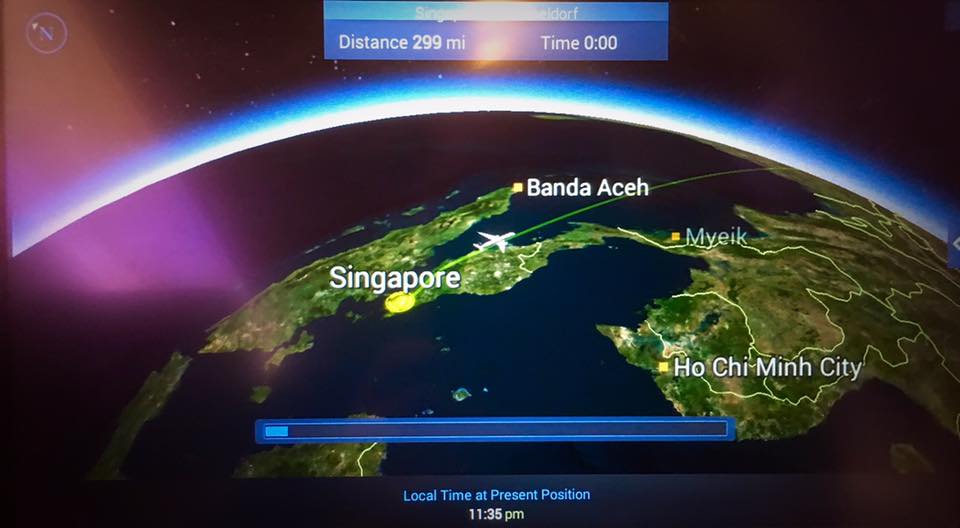 Push back, aileron extended, flaps locked at 30 degrees. This was followed by a short taxi to runway 20C. 9V-SMA rolled down the runway and gained speed. Positive climb, wheels up. We were airborne. Heads above the clouds, my physical being was now soaring towards DUS at 500 miles per hour!
The action began once the aircraft attained its initial cruising altitude. Seat belt signs were switched off. The crew started their duties. Window shades were lowered as we would be flying into sunrise. The Chief Purser came forward and introduced himself, spontaneously handing me two bottles of mineral water, to keep me hydrated through the flight. Flight crew came around to distribute specially designed amenity pouches which pictured its new pride of the skies, the Airbus A350-900. Supper was also served. 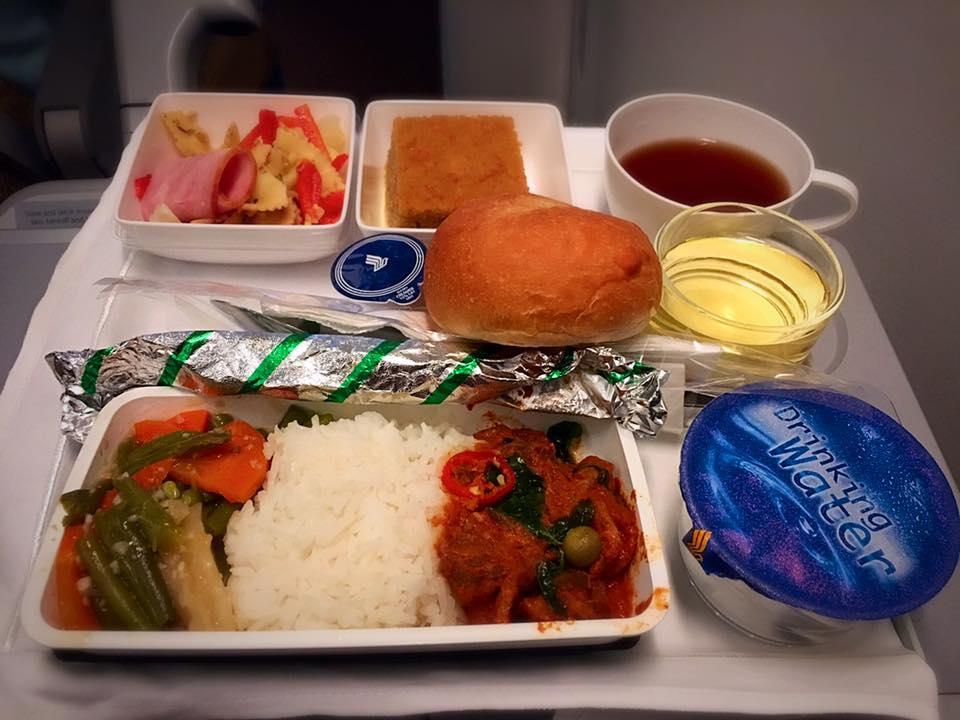 Post-supper service, lights were dimmed. Much of the flight went about as normal. After all, it was already late, and inflight products, services and entertainment onboard Singapore Airlines was already top notch, versus other airlines’ offerings of today. For all their longer flights, SIA always places baskets of snacks in the galley for passengers to self-indulge throughout the journey. 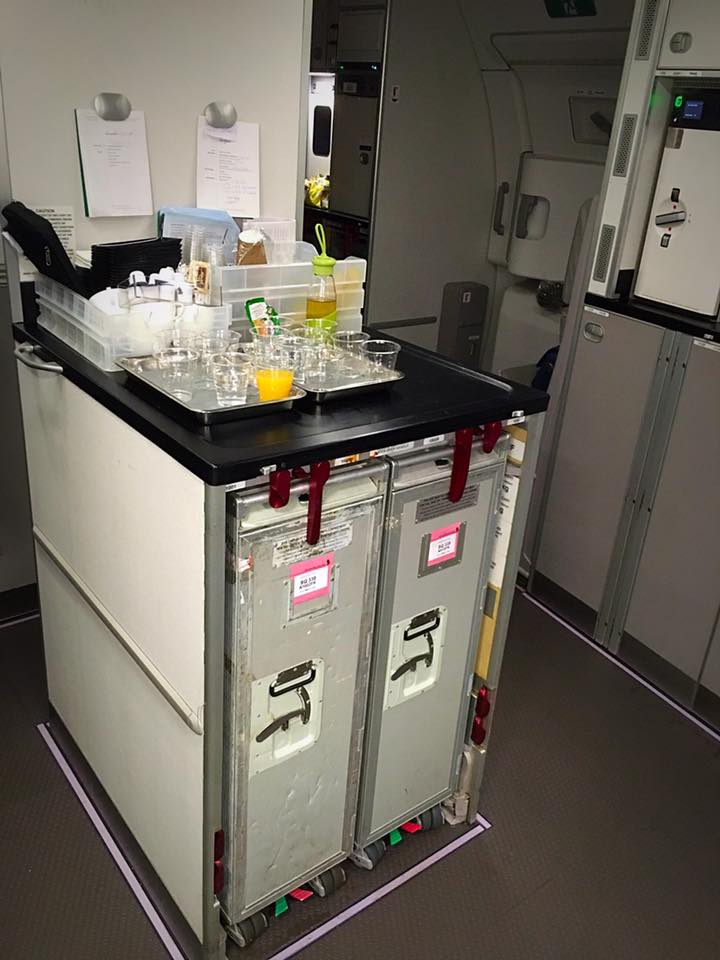 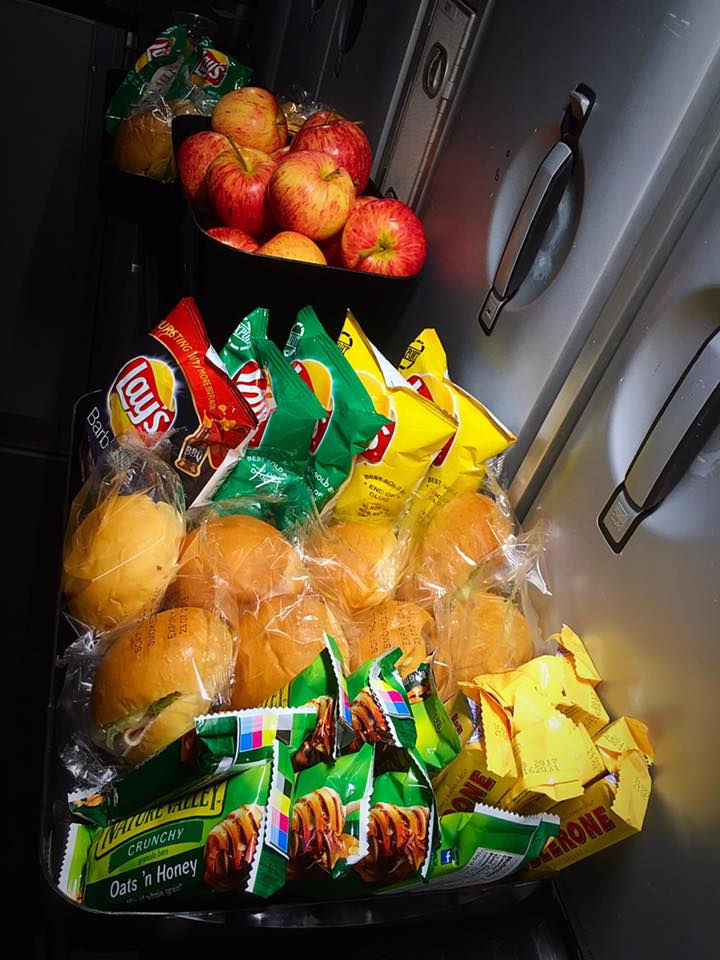 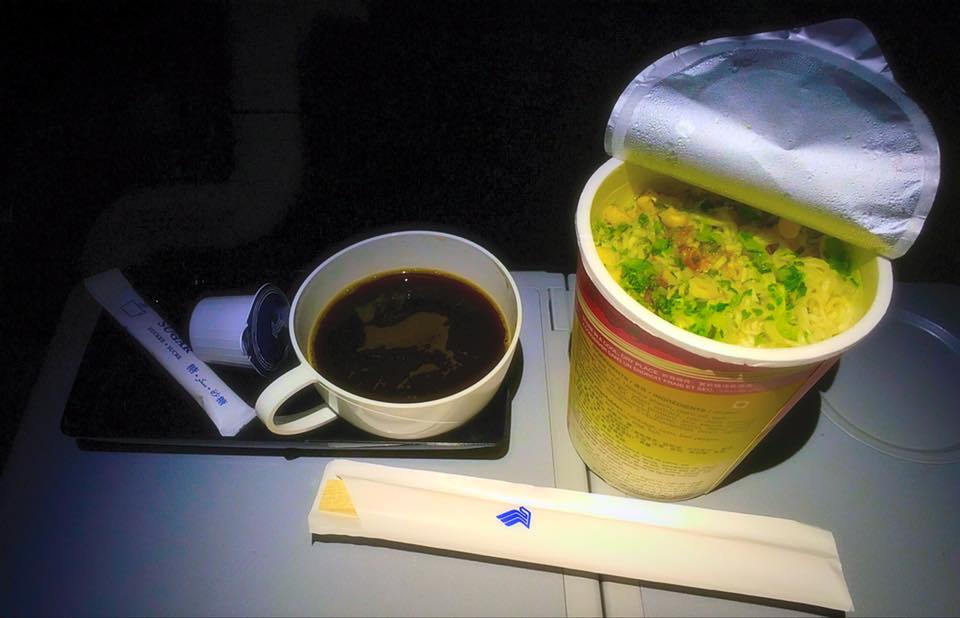 Breakfast was served just prior to arrival. 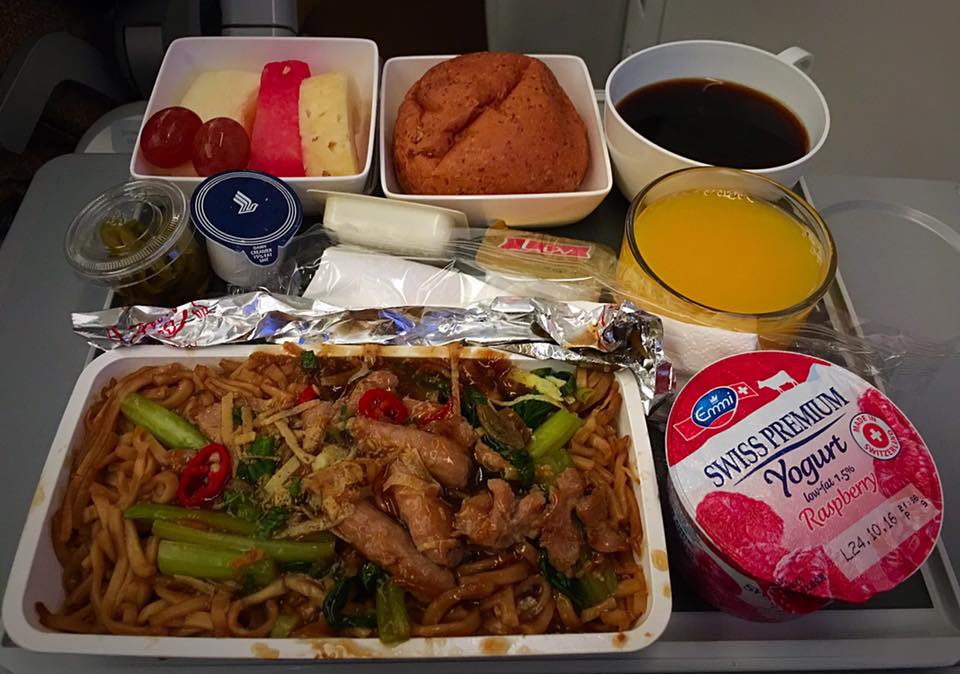 Following a 12 hour ride, the Captain came on the Public Announcement system, informing us that we would be commencing our descent into Düsseldorf, Germany.
Crew commenced their pre-arrival checks. With our seats placed upright, foot rests and meal trays stowed, window shades raised, and seat belts fastened, we all waited enthusiastically for the wheels to make contact with the ground.
At 0610hrs, we had landed, and following a short taxi, the pilot made that announcement we were all energetically peeking out of our windows for – the water cannon salute to welcome our inaugural flight. Düsseldorf Airport Fire Emergency services had positioned two fire vehicles at Gate A79. 9V-SMA positioned herself near the gate, and paused for the golden shower blessing, before continuing slowly towards the gate.

Doors opened at 0618hrs, 12 minutes ahead of her scheduled arrival time of 0630hrs. Ground staff entered the aircraft, and welcomed us to Düsseldorf. Baggage collection information details were provided, along with information of onward connections for passengers like myself. 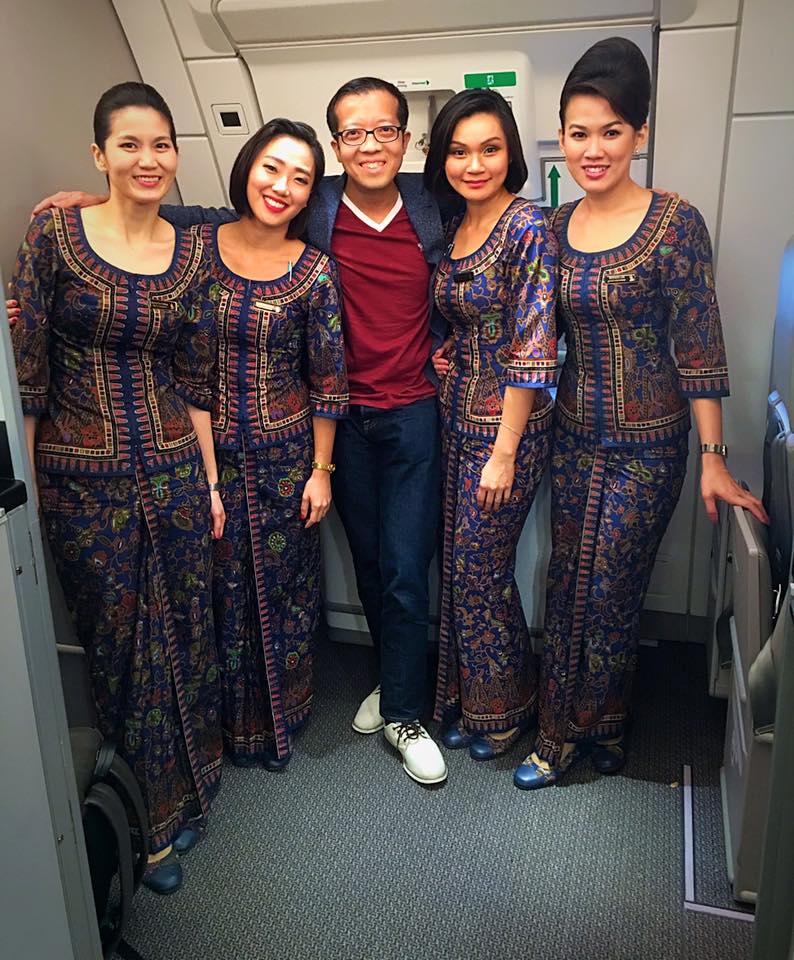 My two week vacations in Germany had commenced!! Midway in the trip, I wrote a mail to the airline Management, thanking the team for the great services as always, experienced with Singapore Airlines, and to award deserving recognition to the crew of my flight.
A few days later, Management responded,

“Most importantly, we appreciate your kind words regarding the crew on SQ338. As you rightly pointed out, it is their soft touch that makes all the difference. I am sure they would be greatly heartened by your strong words of encouragement.” – SVP, Marketing

“Appreciate the compliments on the crew service which I will certainly convey and recognize.  I expect they were pretty hyped up for the first flight too :)” – SVP Cabin Crew

The best memories are captured through pictures and prove why Singapore Airlines is an all time absolute great way to fly. She is an icon of Singapore 🇸🇬. With humble beginnings since 1947, post-MSA era, Singapore Airlines and her team at large, have contributed to much of her success through the years, with excellence going at full-throttle, “full-speed-ahead”. Here’s why: http://youtu.be/dAFHH3seBBU
Singapore Airlines is today, more than just a great way to fly. It has become the way to fly, for an experience that showcases warmth, hospitality and grace of the true Asian spirit, that world-renown service delivered by the Singapore girls, in their award-winning Pierre Balmain Kebaya uniforms.
Singapore Airlines, a carrier that boasts of inflight service that other carriers talk about. That pledge remains true to this day.
As a Singapore Airlines Super Fan, July 2016 is special for one reason alone: #UltimateA350Experience – not just once, but four times….. ✈️🇸🇬
July 2nd, 2016: CGK-SIN / 9V-SMB / SQ957
July 18th, 2016: SIN-CGK / 9V-SMB / SQ956
July 20th, 2016: CGK-SIN / 9V-SMB / SQ957
July 21st, 2016: SIN-DUS (inaugural flight) / 9V-SMA / SQ338
Check out my past article on Singapore Airlines First Class by clicking here.
Browse through our wide collection of airline reviews here.
Read a review of the return flight in Business Class here.