On a recent trip, I decided to burn a pile of my Singapore Airlines KrisFlyer miles to upgrade my mother to Suites all the way from Sydney to London. It was to be a belated birthday present, and served as her gift in January, despite her actual birthday being in September.

Secrecy was the key, here, as I had to be absolutely sure that no emails or calls regarding the upgrade were sent to her. This meant I had to log in to her KrisFlyer account and change all the contact details to mine (temporarily). This way, any communication or itinerary updates would come to me, and she wouldn’t be prematurely surprised to see “Suites” on the booking confirmation.

Whilst Singapore Airlines’ KrisFlyer scheme is relatively limited in benefits (points expiry, no family pooling, no online redemption store etc.), they are incredible when it comes to award availability and cost, as well as ways to earn miles. A one way upgrade from Business to First Class from Australia’s East coast all the way to Europe (including London) came in at 77,500 miles on the upgrade chart. However, these prices are almost never paid, as online bookings receive a 15% discount, bringing this down to 65,875 miles and no taxes.

Next came the booking challenge. I often find the online upgrade services to glitch at some point, and in this case it did just that. So I called up the KrisFlyer contact centre (the first of MANY, MANY calls) and tried to process the upgrade. To my surprise, availability on the Singapore – London sector was wide open, and they were able to confirm this immediately. However, as is almost the norm for Sydney flights, the Sydney – Singapore sector was on waitlist… damn! SQ offer three levels for redemption: Saver, Standard and Full, and in this case all were on waitlist. Keep in mind this was several months out from the flight. Like most airlines, months before the flight, only a tiny amount of space will be released for redemptions, as the airline would rather sell commercial seats. They will often then release more award space in the weeks leading up to the flight. So, you can be placed on a waitlist and have it confirmed almost instantly, or be forced to wait up until the day before the flight.

However, there ARE ways around this! Agents have power to either chase, push or confirm a waitlist from the call centre. So, if you have certain circumstances and the agents are happy to, you can often find a confirmed waitlist after a great deal of work.

So, over the next few months, I made several calls to the call centre to check the status of the waitlist and see if they could chase or push it. Each time they said they would send a chaser request, however nothing much came of that. Within a week of the flight, nothing had happened, and this is where I got annoyed.

Singapore Airlines are renowned for very poor complimentary upgrade procedures. Whilst other carriers will op-up guests to higher cabins even if they have no status and are booked on a redemption ticket, SIA is so incredibly strict on this matter. I have had countless friends and relatives receive completely random complimentary upgrades on all sorts of other carriers, yet in all my years of loyalty, and the loyalty of my family (all of whom are/ have been Silver/Gold), we have never received a complimentary upgrade on SQ. Now, I wasn’t asking for a complimentary upgrade, as I understand why they do this. It’s all about keeping their premium space for true premium customers, and I respect that. What bugged me was that, whilst other airlines were so liberal with FREE upgrades, SQ was so strict and limited with PAID upgrades. Here I am trying to PAY MILES for an upgrade from PAID BUSINESS CLASS to SUITES, yet nothing happens.

I made a call to the airline, and was straight with the agent. I told her it was a birthday gift, that my family and I are all incredibly loyal to the carrier, and basically spat out the rant I wrote above. In response, she said she would do whatever she could from her end to confirm the waitlist. So I ended the call and waited. Much to my delight and surprise, just a few hours later I received the always exciting text saying that the waitlist was available for confirmation! This was even more of a surprise as the flight ended up being full, and there may well have been paid commercial demand for the Suites. Wow, thanks SQ!

Anyway, after calling the airline one more time, confirming the ticket (and paying an extra 10,000 miles for the stopover fee), both sectors were ticketed. Even though my mother’s birthday was many months before, I also requested a birthday cake, which they happily loaded onboard.

Then came the fun part! I can’t express the joy when we walked up to the Suites counter in Sydney, and the First Class reception at Changi, and my mother just smiled with disbelief as she was handed the golden boarding card. And it got a whole lot better onboard eating cake and sipping Dom and Krug in the Suites! 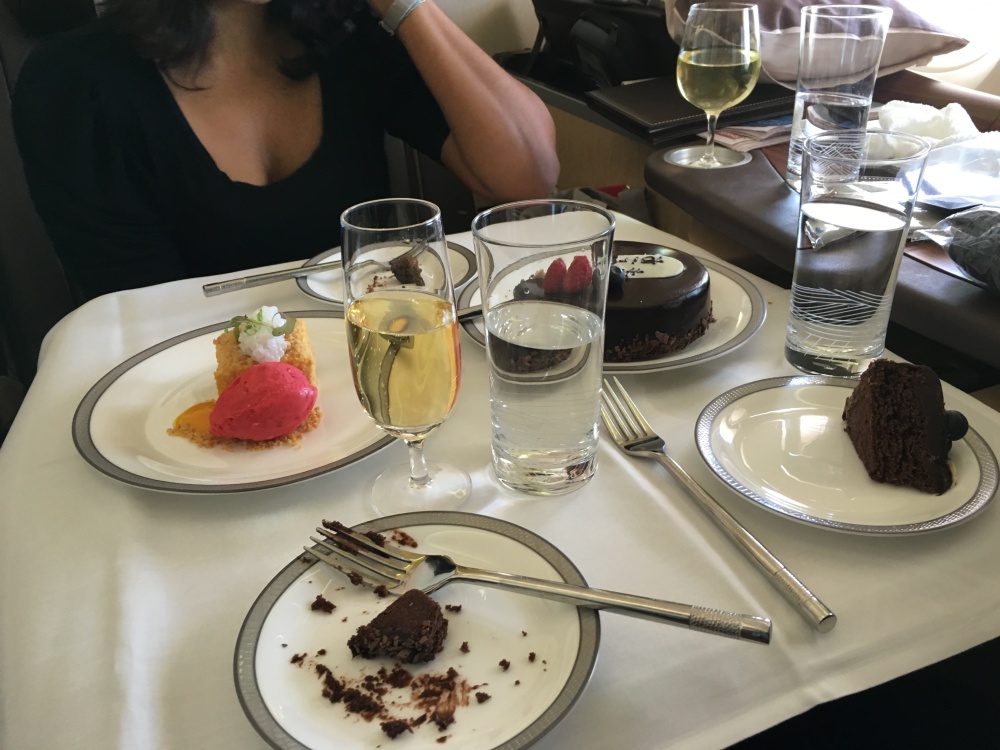 Hat’s off to SQ for making it all happen! If you’d like to read about the Business Class components of that trip, click here.