Progressively, most US airlines are focusing on premium cabins onboard narrow-body A320s for the medium haul route across the American continent. After United and American both introduced new cabins (Including American’s 3 class A320), JetBlue, which is seen as an all economy, low fare airline has surprisingly introduced a First Class Suite to compete with the bigger airlines.
In the second quarter of 2014, JetBlue will progressively introduce the new cabins on 11 A321 aircraft. These aircraft will be used solely for the transcontinental routes, in particular for flights from New York JFK to Los Angeles or San Francisco.
Despite being an all economy airline, JetBlue passengers have said that they would much prefer a premium cabin, and some even say that they would fly with JetBlue for the longer routes in a premium cabin, rather than in a premium cabin on one of the major airlines.
The cabin itself consists of 16 lie-flat seats featuring a high degree of control and massage functions. Each seat has a 15 inch HDTV. The configuration of the seats is interesting, and does not make a lot of sense. The odd rows (1, 3, 5) feature 2-2 seating, with more of a Business Class feel. The two even rows (2, 4), however, are far more ‘First Class’. These rows feature a 1-1 config, with each seat having a sliding door and converting to a private suite. Why the airline didn’t put the ‘suites’ together, and then the business seats is a mystery.
But for travellers regularly flying on the transcontinental route, the new suites or Business Class seats will be a popular choice. And the airline itself will benefit wholly with a much higher price tag than economy. WHATCH THE VIRTUAL TOUR HERE 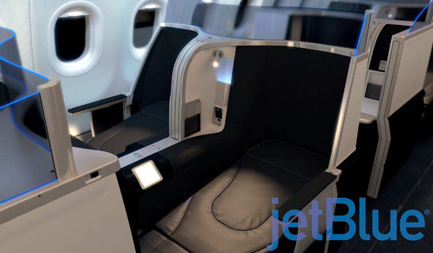