Qantas has increased the seating capacity on its A380 fleet by boosting Economy and Premium economy numbers, whilst reducing the number of Business class seats. This brings the total capacity up from 450 to 485 (a 34 seat increase). Previously the airline had 332 Economy seats, and the increase sees 371 Economy seats. Only 3 extra Premium Economy seats have been added (one extra centre row at the rear of the cabin). But all this comes at the cost of removing 8 Business class seats, self-service snack bars, and the new issue with lavatories onboard. The 8 Business seats have been removed to push forward the size of the Economy/Premium cabin on the  upper deck. Previously, only Premium Economy and Business was seen upstairs, but the aircraft are now equipped with 3 classes on the upper deck alone, whilst the main deck stays in the same 2 class configuration. Qantas used to have several self service snack bars in all classes except First. By removing a few in Business class, the airline managed to increase capacity and revenue.
The conversions have been in progress over that past years, and currently all A380s in their fleet follow this configuration. Qantas has several more A380s on offer, some for deliver in 2018 and beyond. The airline is not sure whether the configuration in these aircraft will remain the same. 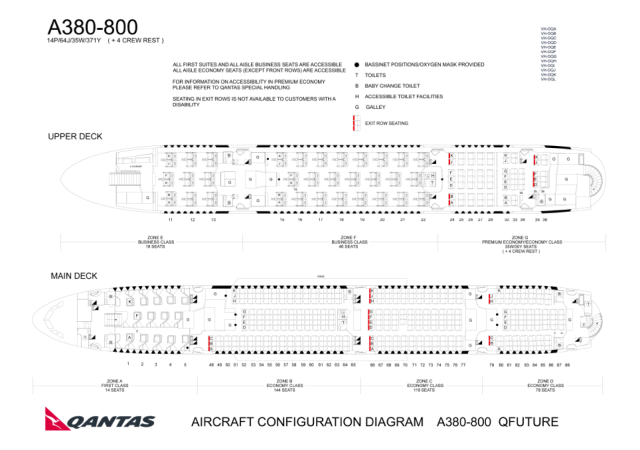